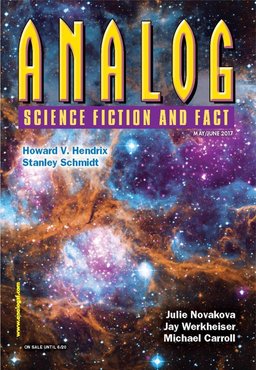 Howard V. Hendrix is experiencing a bit of a comeback in the pages of Analog magazine. He launched his career with a well-respected SF trilogy in the late 90s [Locus Award nominee for Best First Novel Lightpaths (1997), Standing Wave (1998), and Better Angels (1999)], but he hasn’t published a novel since Spears of God in 2006.

But since September 2007 he’s published no less than eight stories in Analog Science Fiction and Fact, including two novellas:

The May/June Analog contains that last one, the novella “The Girls with Kaleidoscope Eyes.” Victoria Silverwolf, in her Tangent Online review, summarizes it as follows.

A government agent investigates an apparent attempt by a teacher to kill a classroom full of girls with a bomb, although at the last second he protected them from the explosion, seriously injuring himself in the process. She interviews the teacher while he is in custody in a hospital. He reveals his strange motive for his aborted crime, stating that “before there can exist a world of machines that can pass for people, there first must be a world of people that can pass for machines…”

Silverwolf praised several other stories this issue, including work by Julie Novakova, Eric Choi, Manny Frishberg and Edd Vick, Lavie Tidhar, and Bud Sparhawk. Here’s a few of her story descriptions I found most intriguing.

“In the Mists” by frequent collaborators Bill Pronzini and Barry N. Malzberg takes the form of a journal kept by an astronaut who has been alone on an alien planet for seventeen years. He wonders if he is dead or alive, and sane or insane. The story blends Malzberg’s New Wave style with themes from hard SF.

“Where the Flock Wanders” by Andrew Barton involves two space explorers searching for ancient alien artifacts in the rings of Saturn. Instead they find a damaged spaceship left over from a war between Earth and colonists of the outer solar system…

“Proteus” by Joe Pitkin features a woman who is a spy investigating a habitat floating in the atmosphere of Venus, where illegal human genetic engineering is suspected to be taking place. She must eventually decide what to do about what she discovers. The setting is a fascinating one, perhaps more so than the plot…

“Kepler’s Law” by Jay Werkheiser winds up the issue with a tale of survival on an alien world. An all-female crew sent to a distant, inhabitable planet with a cargo of frozen embryos arrives to discover an unexpected threat. What makes their mission even more critical is the fact that they fled an Earth which seems to have been on the brink of total disaster, so they may be the last remnants of humanity…

And here’s Analog editor Trevor Qachari on the contents of the entire May/June issue.

We kick off the summer with a blockbuster techno-thriller from Howard V. Hendrix: One enterprising FBI agent discovers that the Singularity may not only work in one direction, but will that information cost her life? Find out in “The Girl With Kaleidoscope Eyes.”

Then our fact article comes from Michael Carroll: in our search for alien intelligence, it’s entirely possible (if not likely) that the only civilizations we’ll find will be long dead ones. If that’s the case, then we may need a specialized field to study them; perhaps something like “Alien Archeology.”

And the short fiction is as varied and unexpected as always: a very real disease begins cropping up in troubling ways, in Stanley Schmidt’s “The Final Nail”; harsh environments sometimes make for harsh interpersonal relationships, but will we carry our old prejudices with us? “Kepler’s Law” from Jay Werkheiser suggests one scenario. Then the famous parable turns out to be both figuratively and literally true, in Julie Novakova’s “To See the Elephant.”

The cover this issue is another astronomy shot, a close up of Region NGC 6357. Here’s the complete Table of Contents.

The May/June issue is on sale until June 20.

We last covered Analog with the March/April 2017 issue. See all our Analog coverage here.

Our Late May Magazine Rack is here. See all of our recent fantasy magazine coverage here.