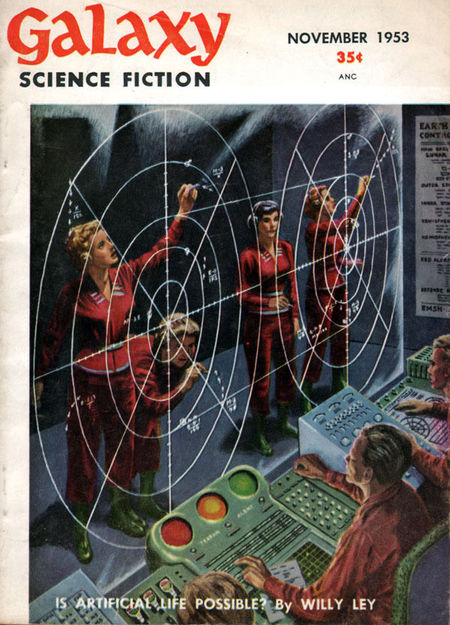 The November, 1953 issue of Galaxy Science Fiction is one of the better ones, from my perspective. Aside from the continuation of The Caves of Steel by Asimov, Michael Shaara and Roger Dee contributed a pair of good tales.  (The cover art is by Ed Emshwiller.)

“Keep Your Shape” by Robert Sheckley – Pid and his crew arrive on Earth to prepare for a mass invasion. All previous teams failed in their missions for unknown reasons. The Grom (a race of shape-shifters), conquer new worlds as a course of survival. The dangers of Alterationism and Shapelessness are at the forefront of Pid’s mind, but he’s determined to succeed where all other teams failed.

Sheckley does a good job with the Grom, who aren’t very close to humans but still have motives and ideas that I can understand. It’s a fun read.

“Mr. President” by Stephen Arr – George Wong wins the election to become President of the Solar Union, to his dread. It’s more like a draft of qualified personnel. The weight of the responsibilities is enormous – weighing out which war efforts in the galaxy to become involved with and other decisions.

What fascinates me with this story is the plausibility. For example, the people who report to the president come in with their high-level plans and suggestions, followed by asking for his thumbprint (signature) of approval. And Wong tries to take the time to understand it all because he feels the weight of his decision. And then to really make it sting a bit, he welcomes back a few veterans from a military action that took place long ago, only to be silenced by one of the veterans who acerbically asks if the president knows where the action took place or how many died or if anyone on Earth even cares. I felt the president’s discomfort in that moment. I understood where the author was trying to go with the ending, but I didn’t like it; that’s where the plausibility stopped for me.

Stephen Arr was a pseudonym for Stephen Rynas, though I don’t think Rynas ever used his real name in publications. He had a brief run of published short stories from 1953 to 1955, and that’s all I found. 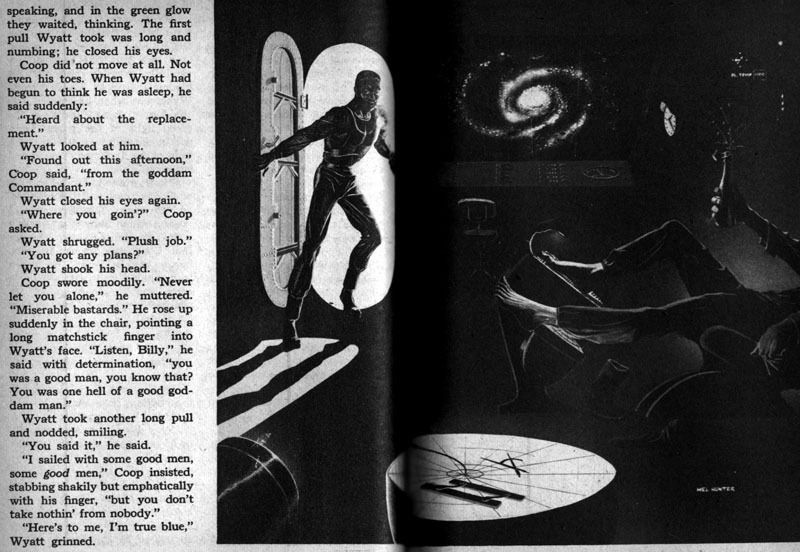 “The Book” by Michael Shaara – Beauclaire’s first assignment after graduating the Academy is to investigate a dust cloud in Cygnus, looking for life. He’s replacing Billy Wyatt as the commander of a small ship, but Billy will remain aboard for this assignment to ensure a smooth transition. Not that any transition is smooth for Cooper, the ship’s pilot, who hears the news while they’re in port. Like most missions, it seems unlikely they’ll find any life at all, but the world they discover within the dust cloud contains a civilization Beauclaire can’t begin to understand.

This is my favorite story of the issue. The characters all seem realistic, but the setting is futuristic. And I love stories where characters explore new worlds.  (The artwork is by Mel Hunter.)

“Unbegotten Child” by Winston Marks – Sara Caffey shows all the signs of pregnancy, but she won’t believe it. She’s still a virgin, and she’s convinced it’s actually cancer. Dr. Sansome agrees with her that there is cancer but that it’s actually a new type of reproduction that has never been seen before.

In light of what we know about cancer now vs. in 1953, I think the plausibility of the plot has greatly diminished. But I still think it’s interesting.  (The artwork of the woman with the stethoscope is by René Vidmer.)

Winston Marks had a couple of stories published in the early 1940s, but he had many more published during the 1950s. Armchair Fiction published a collection of his short stories in 2012 titled The Test Colony and Other Tales. 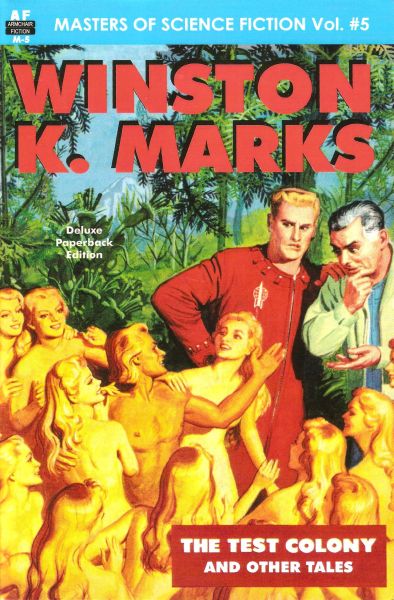 “Clean Break” by Roger Dee – Veterinarian Oliver Watts has a rather predictable life, governed by his aunt and older sister; it’s not as exotic as his childhood dream of training jungle animals, but they know better than him. One day, he’s summoned by a wealthy man to assess an ailing polar bear – part of a collection of animals the man recently acquired. And that’s only the start of Oliver’s adventure.

Despite taking place in 1953, this story doesn’t lose anything with time. I liked the premise around this, which allowed for a veterinarian, Walter Mitty type of protagonist. 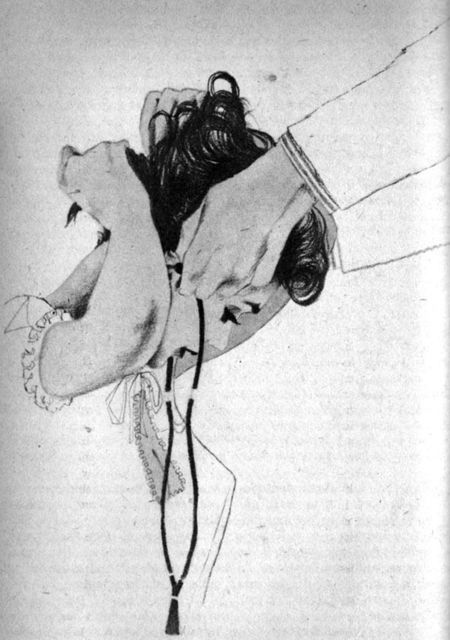 The Caves of Steel (Part 2) by Isaac Asimov – Elijah Baley and Daneel Olivaw continue their investigation into Dr. Sarton’s murder. Elijah accuses his partner of being human, but Daneel proves he’s a robot by showing what’s beneath the skin of his arm.

Back to square one, Elijah tries to piece together why someone would kill Dr. Sarton. The man believed strongly in humans and robots working side by side. Those who had settled on the outer worlds relied too much on robots; humans on Earth despised them. So perhaps there are motives on both sides to kill anyone advocating such equality.

Despite the secrecy around their investigation, Elijah and Daneel are followed at a distance. Elijah fears Daneel’s identity has been compromised. And that whoever is behind the murder might be targeting them next.

I’m still enjoying the pacing and futuristic view in this novel. I hope it concludes well. It’s building toward some upcoming confrontations, and I’m still not clear on where it will go. Stay tuned on my final report on the serial.

Matthew Wuertz’s last retro review for us was the October 1953 issue of Galaxy.

Nice survey of the issue. Would you like to add the names of the artists?

I like that screen. Doesn’t it remind you of Star Wars – the rebel base as they were preparing for the run on the Death Star? No, not accusing Mr. Lucas of plagiarism, but it sounds like a tribute. Anyone notice all the Valerian stuff done before Star Wars the first movie? But Star Wars was a tribute to classic “Space opera” science fiction and restarted the Genre.

On “Mr. President” – never read it, but have to check it out from Internet Archive.

That’s one thing strongly missing today. Oh, they might be able to make sure the crews are “Diverse” and all the PC stuff – won’t go there, don’t want to get foaming at the mouth today…

But now and again is a nice idea for how things could be run better – in an ideal or at least less un-ideal world. I don’t mean more “Diverse” or whatever, but fairer, better to live in. That’s a classic staple of science fiction.

Personally I’d re-work our government so that there were strict rules on personal finance for civil servants and elected officials. Essentially making it impossible for a person in office to profit from it in any way. They get a good salary (so no desperation to tempt) but harsh penalties for any personal profiteering – no ‘speaking tour’ unless they’d rather spend their free time that way – the monies go to charities they have no hand in.

Random democracy is a good extrapolation of this – people could not setup profit from an office because they’d find themselves suddenly thrust into it – their lives on hold – but the shame alone of messing up, also the real social and legal consequences, keeps them on their toes and using 100% of their abilities to do their best – then they happily return to civilian life and it’s a “Granddaddy” – that picture in your den – you were President for a month!? Wow!

A science fiction story is a good way to put something like that out, versus a long, boring political screed. When I start writing science fiction (busy with historical and Sword and Sorcery project as of now) I’ll put in my visions for what a good future could be along with ideas for government, etc. The challenge will be to wrap them up in a good story so it’s just not a big political typing bit.

Major Wootton – yes, I’ll add the artists… at GenCon at the moment.

I added artwork credits. I can’t find information on the cover artist for the Winston K. Marks anthology.