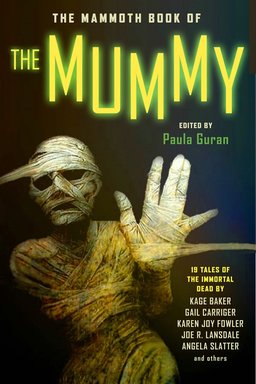 Paula Guran does interesting anthologies. She tends to focus on modern (21st Century) writers, which means she’s plowing a different field than all those vintage anthologies I love — and introducing me to a host of new writers.

Her newest is The Mammoth Book of the Mummy, containing 25 new and reprint tales “that explore, subvert, and reinvent the mummy mythos” from Joe R. Lansdale, Kage Baker, Paul Cornell, Terry Dowling, Karen Joy Fowler, John Langan, Helen Marshall, Keith Taylor, and many others. It arrives from Prime Books in trade paperback next month.

Human mummies, preserved by both accident and intent, have been found on every continent except Antarctica. These enigmatic remains of humanity have fascinated people for centuries. Shrouded in history they have acquired meaning and symbolism quite separate from their value as a source of historic knowledge, inspiring tales of reanimation, reincarnation, loves that outlive death, and curses that bring vengeance from the past.

As a figure of the supernatural the mummy has attained iconic status in the popular imagination. The Mammoth Book of the Mummy presents a collection of tales written for the twenty-first century ― including four brand-new stories ― that explore, subvert, and reinvent the mummy mythos. Some delve into the past, others explore alternative histories, and some bring mummies into our own world. Within these covers lie stories of revenge, romance, monsters, and mayhem, ranging freely across time periods, genres, and styles sure to please both mummy-lovers and those less wrapped up in mummy lore.

I published one Mummy story in Black Gate, Dan Brodribb’s hilarious “The Girl Who Feared Lightning” in BG 14 (“Nobody really talks about what mummies can and can’t do. They never really caught on like some monsters did. Poor branding.”) Here’ hoping Paula’s latest anthology will help mummies with that branding problem. 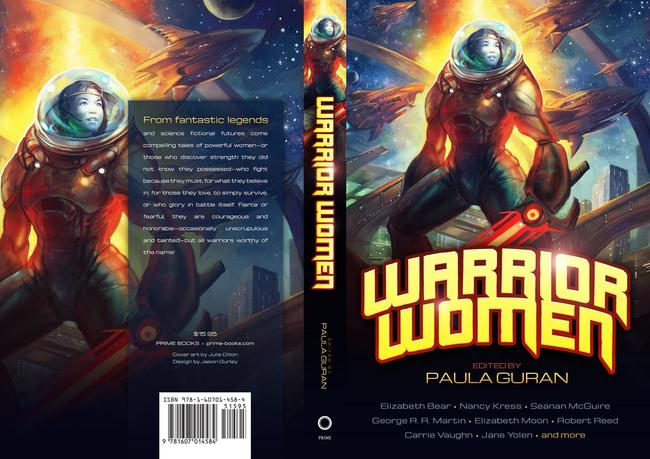 Paula’s other recent projects include:

The Mammoth Book of the Mummy will be published by Prime Books on January 31, 2017. It is 480 pages, priced at $16.95 in trade paperback. Get more details at Paula’s website here.

See all of our coverage of the best in upcoming fantasy books here.

I have to admit, mummies are my favorite undead.

I guess they’re my second favorite, after vampires. But way above ghouls, zombies and ghosts!