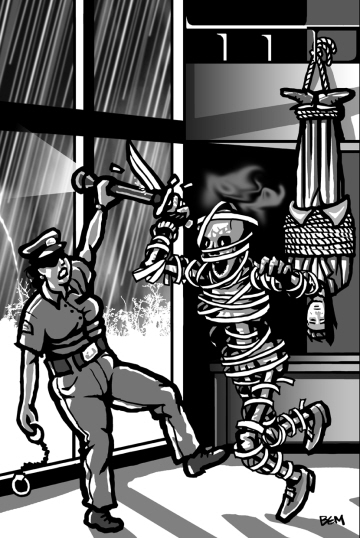 The sun was going down when Cara started her shift. Large drops of rain plopped against the windshield. Thunder muttered promises off on the horizon. Cara’s hands tensed on the steering wheel. Go away, thunder. Go east, there’s nothing for you here.

Normally Cara was supposed to patrol the streets a couple times in the evening to maintain a visible presence, but tonight she drove directly to the power plant, where the body had been found. The plant looked too utilitarian to really contribute to Avalon’s public image so it was tucked away from the rest of the community behind a copse of trees. Cara parked her vehicle, noting a car with a company sticker already in the lot.

She reached into the backseat where she kept her extra uniform and dug around until she found her jacket. She slipped into it and stepped into the rain.

She began to search the area, starting at the culvert at the bottom of the slope and moving in ever widening circles. In the west, the sun sank quickly, and she unclipped her large steel flashlight and flicked it on.

She looked for nearly an hour but found nothing. As she made her way back towards the car, she remembered the way the victim had been contorted and jammed into the pipe. A zombie wasn’t strong enough to do that kind of damage. She really hoped it wasn’t a werewolf. Or a vampire.

Don’t be ridiculous, she told herself, as she headed back to the car. You know there’s no such thing as vampires.

She sensed the person behind her before she felt his hands, and she felt his hands before she got a good look at him. She pulled away from his grip and fell on her hands and knees. He loomed overhead, reaching for her. She held on to her flashlight and swung it hard. She hit him once in the shin, which was good, and once on the kneecap, which was better, and his yowl of pain drowned out the next peal of thunder. He fell against the car, using it to hold himself upright. She got one foot underneath her and propelled herself to her feet, reaching for her handcuffs.

The man in the suit leaned against the car, massaging his knee. “Has anyone ever told you, you don’t hit like a girl?”

“You shouldn’t have grabbed me.” Cara’s breath was slowly coming back.

“It’s a sarcophagus,” the man corrected.

They were standing in the central display area of the Avalon Cultural Center. The open sarcophagus lay before them on a softly lit display table. Cara peered inside.

Empty. The sarcophagus lid leaned against the wall. There were figures carved into the lid, but they had been partially worn away, making them difficult to identify.

“It’s over three thousand years old,” the man said. “It contained the mortal remains of the Nameless One, one of Egypt’s most powerful and feared sorcerers. He tried to wrest control of Egypt from the Pharaohs. As punishment he was mummified alive and entombed by Amenhotep II in a hidden crypt a few miles from the Valley of the Kings. It was only recently rediscovered.”

“Shouldn’t it be in a museum somewhere?”

“The Avalon Company sponsored the excavation. It’s only fair that the artifacts become company property.”

“So where’s the mummy?” Cara asked. She ran her hand along the edge of the sarcophagus.

“Well.” The man in the suit cleared his throat and studied the floor. “It escaped.”

“It escaped,” the man repeated. “Two days ago.”

“You mean it was stolen?” she said.

“I mean, it got up and walked away.” With his right hand, the man made a walking movement with his fingers; with his left, he pointed to the corner of the ceiling. “See that camera up there? We got the whole thing on film.”

Slowly, very slowly, Cara pulled her hand away from the sarcophagus and looked around for something to wipe her fingers on.

“You think the mummy is the killer,” she said.

“The victim’s heart was missing,” the man said. “Before he was entombed, the Nameless One was working on a spell that required uncorrupted human hearts.”

“Uncorrupted,” Cara said. “He’ll be looking for a while.”

The man nodded glumly. “That’s what we’re afraid of.”

“So why are you telling me this? I thought your people were going to handle it.”

“Because of the potential embarrassment factor, we’ve decided to limit the amount of people we involve. You’ve already seen the body, so we might as well let you in. But you’re going to need to sign a confidentiality agreement. We can’t have anyone else learning about this.”

“I signed one when they hired me.”.

“Good. You know what could happen if you so much as breathe a word of this to anyone, right?”

“Hey,” she said, thinking about how much her boyfriend would dig the whole mummy angle, “I’m a professional.”

He studied her and nodded.

“So how many people are coming in to take care of this?” Cara asked.

“Counting you and me? Two.”

“One thing I’ve always wondered,” Cara said to distract herself from hitting him with her flashlight again. “How come Avalon doesn’t put any of their factories in town? You would think this would be a good place for them since they own all the land for miles.”

“Avalon doesn’t have any factories,” he told her.

“Then how do they make their stuff?” Cara asked.

“They don’t. It’s all contracted out. Labor’s cheaper overseas, anyways.”

“So other companies make the stuff, and it gets brought over, and Avalon sticks their name on it?”

“Oh, no. They do the labeling at the overseas plants as well.”

“We don’t sell products; we sell a lifestyle,” the man recited, as though that explained everything.

“I read something about those plants in the paper,” Cara said. “Don’t they pay twelve year-old girls thirty-two cents a day to work for sixteen straight hours with no breaks?”

“We wouldn’t know anything about that,” the man said quickly. “All the Avalon Company cares about is getting the highest quality product at the most competitive price. We can’t be held responsible for overzealous independent contractors.”

“Where do you think the mummy went?” Cara said.

“He’s probably in the building somewhere. He can’t venture too far from his sarcophagus,” the man said.

“Really? I’ve never heard that before.”

“Nobody really talks about what mummies can and can’t do. They never really caught on like some monsters did. Poor branding.”

“It has to do with the stars,” the man explained.

“Astronomy,” the man said. “Astrology. It would probably be very difficult for someone of your educational level to understand.”

Cara tightened her grip on the flashlight until her hand hurt. She said: “Maybe it would be better if we split up.”

The complete version of “The Girl Who Feared Lightning” appears in Black Gate 14.

3 thoughts on “Fiction Excerpt: The Girl Who Feared Lightning”