Last June, in the comments section of an article on a 1959 Ace Double by Andre Norton and Jerry Sohl, Joe H, asked:

I think this is the only “classic” Ace Double I own… King of the Fourth Planet/Cosmic Checkmate by Robert Moore Williams/Charles V. De Vet & Katherine MacLean. Any chance it might make your list someday?

It sometimes takes us a while, but we always do right by our readers!

I’ve never read this one. But Rich Horton has, of course, and he reviewed it around a decade ago. King of the Fourth Planet, a tale of Martians and telepathy machines, didn’t appeal to him, but he found Cosmic Checkmate (later expanded and republished under the title Second Game), a tale of space exploration and alien games, much more intriguing. Here’s his review. 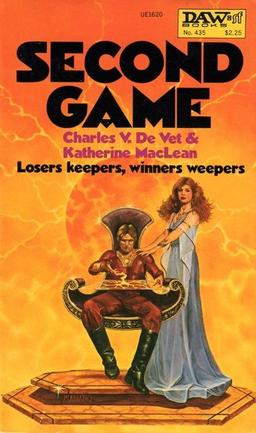 King of the Fourth Planet is about 43,000 words long. Cosmic Checkmate is about 33,000 words, and it has a complicated publishing history. It’s an expansion (by a factor of roughly 2) of the novelette “Second Game” (Astounding, March 1958), a Hugo nominee and still a fairly well-known story. The novel was reissued in 1981 by DAW with further expansions, to some 56,000 words, now retitled Second Game after the novelette. (A much better title!) Finally, De Vet by himself wrote a sequel published in the February 1991 Analog, called “Third Game”…

King of the Fourth Planet is pretty straightforward SF. John Rolf is a former executive of the Company for Planetary Development who has repented of his unethical ways, and moved to Mars, divorcing his wife and leaving her with their young daughter when she refuses to accompany him. Rolf lives on the giant mountain Suzusilam, where most of the Martians live. The mountain (perhaps a “prediction” of Olympus Mons, which wasn’t discovered until 1971) is divided into seven levels, on each of which live Martians of increasing “civilizedness”. The fourth level is the home of the Martians at roughly Earth levels of development. The seventh level is reputedly home only to the mysterious King of the Red Planet, a Martian of incredible powers who “holds the mountain in his hand.” Rolf lives on the fourth level, home to many mechanical geniuses, and he himself is working on a telepathy machine, which he hopes will solve humanity’s problems… It’s mostly a pretty bad book… There are some nice bits — the climactic scene at the top of the mountain is pretty impressive in parts, the advanced Martian tech represented by “abacuses” that play musical notes which cause healing and other powers is really kind of nicely depicted…. Still — not really a book worth attention. And not any reason to reconsider Williams’ place in the canon.

Second Game, or, I should say, Cosmic Checkmate, is rather better. It’s the story of the planet Velda, which has just been discovered by the Earth-centered Ten Thousand Worlds. After warning that they wanted no contact, the Veldians destroyed the Fleet that Earth sent anyway. The narrator, a chess champion, has learned that the Veldians base their society around proficiency in a Game, somewhat like Chess but more complicated. (Details are sketchy, but it is played on a 13×13 board, and each player controls 26 pieces, or “pukts”.) Equipped with an “annotator”, sort of an AI addition to his brain, the narrator learns the Game and comes to Velda to challenge all comers. He puts up a sign saying “I’ll beat you the Second Game…”

This short novel is a quick, entertaining, and generally absorbing read. It’s not quite convincing — the Game is marginally plausible, but not the narrator’s proficiency… Still, overall the story is enjoyable and thoughtful.

Our Man in Space/Ultimatum in 2050 A.D. by by Bruce Ronald and Jack Sharkey
Rocannon’s World/The Kar-Chee Reign by Ursula K. LeGuin and Avram Davidson.
The Plot Against Earth/Recruit for Andromeda by Calvin M. Knox and Milton Lesser
Warlord of Kor/The Star Wasps by Terry Carr and Robert Moore Williams
The Sun Saboteurs/The Light of Lilith by Damon Knight and G. McDonald Wallis
Wandl the Invader/I Speak For Earth by Ray Cummings and Keith Woodcott (John Brunner)
The Sioux Spaceman/ And Then the Town Took Off by Andre Norton and Richard Wilson
Secret of the Lost Race/ One Against Herculum by Andre Norton and Jerry Sohl
Clockwork’s Pirates/Ghost Breaker by Ron Goulart
ATTA/ The Brain-Stealers by Francis Rufus Bellamy and Murray Leinster
The Ship from Atlantis/ The Stolen Sun by H. Warner Munn and Emil Petaja
Vulcan’s Hammer / The Skynappers by Philip K. Dick and John Brunner
The Ship That Sailed the Time Stream by G.C. Edmondson
Bow Down to Nul / The Dark Destroyers by Brian W. Aldiss and Manly Wade Wellman

At some point I’ll dig this out and reread it, just on general principles.

See what you started?

That guy on the first book cover reminds me a lot of Fritz Leiber.

I’m jealous of his hair, that’s for sure.