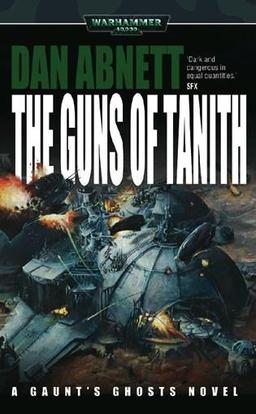 The Guns of Tanith opens with another first for the Ghosts: A training sequence. After redeeming himself for the disaster on Hagia, Gaunt and the men of the Tanith First-and-Only are being deployed to Phantine. Phantine’s industrial history spans so many millennia that most of the planet is covered by smog toxic enough to make human life impossible. The remaining Phantine cities are perched on mountains whose elevations rise above the poisonous clouds. So naturally, when the time comes to liberate Phantine settlements from the occupying forces of Chaos, ground assaults aren’t an option. Thus, en route to Phantine, we find the Ghosts in training for an aerial drop assault, supported by Phantine’s elite aerial corps.

The training sequence reintroduces us to some familiar faces: Twitchy sniper Larkin, soft-hearted giant “Try-Again” Bragg, scout leader Mkoll, and the rest of the crew, along with some relatively new arrivals, particularly Commissar Viktor Hark, who joined the Ghosts in the previous volume to supplement Gaunt’s split role as both Commissar (a kind of propaganda officer) and Colonel of the Ghosts. Hark, as neither Tanith nor Vervunhive, is in a position to be a little harsher, a little more detached, and perhaps a little more objective in his disciple than Gaunt can ever be. He’s a fair man, and fits well with the Tanith, but is more at ease with the brutal reality of a commissar’s duty to enforce iron disciple.

The drop assault on Cirenholm is another in a long succession of thrilling battle sequences from Abnett, with the strictly ground-based Ghosts rendered helpless and forced to rely on wings of aerial transports and atmospheric fighters until they can get boots on Cirenholm’s decks. Abnett actually wrote a spin-off novel about the Phantine Aerial Corps, called Double Eagle, which I’m sure I’ll read eventually. Once landed, the scattered Ghost platoons have to make their way into the city’s interior any way they can, fighting for every corridor against the ground soldiers of the Blood Pact.

One of my few issues with the previous Ghosts novels was that, while the Tanith and other Guard regiments had plenty of flavor, the Chaos troops facing them tended to be more-or-less faceless goons, without much to distinguish one force from the next. That’s partly colored by the absolute nature of the Imperial vs. Chaos conflict, which precludes any kind of communication, negotiation, or even prisoner taking, except for purposes of sacrifice and torture.

The Blood Pact introduced in The Guns of Tanith are more colorful. Unlike the cultist rabble in previous novels, they’re highly trained and fight much like Imperial guardsmen, using similar squad tactics and combined arms. For flavor, they fight wearing blood-crusted fatigues and black iron masks with hooked bills. Their hands are brutally scarred by their initiation ritual, which involves slashing their bodies on the ancient armor of Chaos overlord Urlock Gaur. 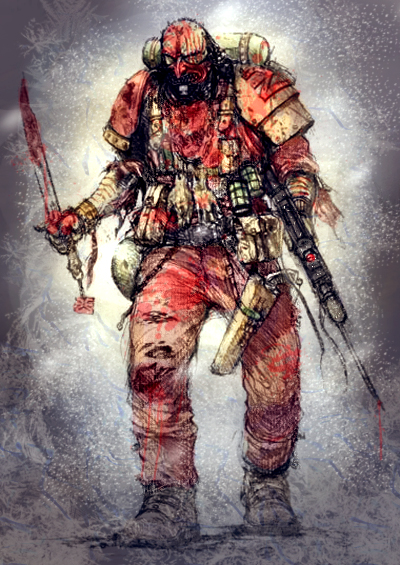 My two complaints about the Blood Pact are minor. One is that, while we’re told they fight as fearsomely as the Ghosts, the necessities of narrative mean that hundreds of Blood Pact typically die in an engagement that might kill a couple dozen Ghosts — which undermines the Pact’s stated effectiveness. This is really as element of the military genre more than any failing on Abnett’s part, a particular suspension of realism necessary to keep our heroes alive and fighting. The other is that, while the Blood Pact in The Guns of Tanith number in the thousands, the 7th novel (Sabbat Martyr) includes a Blood Pact force in the hundreds of thousands… so how much time does Urlock Gaur spend motionless, while endless streams of men coat his armor in their fresh blood, day in and day out?

Actually, I take back what I wrote — that’s not a complaint. That’s a pretty cool and frightening mental image.

For all its intensity, the assault on Cirenholm is just a prelude to the final third of the novel, where a handful of Ghost infiltration teams sneak into the much larger city of Ouranberg on a mission to assassinate the local Chaos commander. This sequence is easily the most tense and exciting thing in the series so far, as the infiltrating Ghosts get a look at life under Chaos occupation — one team blends in with a work-crew of brutally subjugated slaves, while another wanders empty streets, bombarded by broadcast images of insane Chaos preachers screaming obscenities and horrors at everyone in earshot. In the end, Larkin gets to make an impossible shot, and Mkoll gets a moment of colossal badassery to add to his collection.

In the novel’s more quiet moments, Commissar Hark tries to convince Gaunt that he’s guilty of showing Tanith troops favoritism over their Vervunhive comrades (recruited at the end of Necropolis). This comes to a head when Gaunt puts his reputation on the line to free Tanith soldier Caffran from charges of murder and rape, then seems content to let Vervunhiver Lijah Cuu die for the same crimes. Never mind that Cuu is widely hated and clearly a sociopath, while Caffran is widely beloved. If Gaunt puts his neck on the line for one and not the other, how can he claim to command a united regiment?

The situation eventually finds resolution, and The Guns of Tanith sees the Tanith and Vervunhivers working together more smoothly than ever, but Cuu’s resentment will have dire consequences for some among the Ghosts — particularly Larkin, never stable to begin with, who finds himself the primary target of Cuu’s malice.

Trooper Caffran is involved in another interesting subplot. He and his lover, a Vervunhive trooper named Tona Criid, adopted two orphans in the wake of Vervunhive, and are raising them together. Unknown to them, Gol Kolea, a Vervunhive miner and a rock of strength among the Ghosts, recognizes the kids as his own, who he thought dead in the war. Kolea doesn’t want to disrupt their lives more, or take them from their newfound parents, but he can’t stop himself from doing everything he can to keep Caffran and Criid alive, even when it puts him deep in harm’s way.

Heck, even the acknowledgement that children exist feels like a big step for a Warhammer 40K book.

A word of warning, for those on the fence about reading the Ghosts books: Abnett’s not afraid to kill off characters. Not just minor scenery fillers, but some of the most beloved men and women among the Ghosts. The Guns of Tanith is where it really begins, and it only gets worse. It’s naturally appropriate for the style of the books, and keeps the stakes where they should be, but I love his characters enough that it’s genuinely painful to see one go.

Next up: Straight Silver, in which the Ghosts re-fight World War I, and Gaunt has a vision.

Its been a couple years since I read this series, but Lijah Cuu is still among my Top 10 Fictional People I Want to See Eat a Bullet