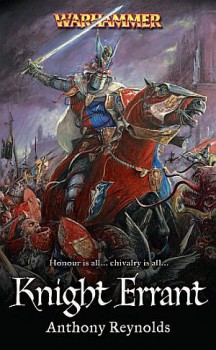 Calard and his half-brother Bertelis are Knights Errant, young knights who have not yet become fully-fledged Knights of the Realm of Bretonnia. The book opens with them arresting a group of peasants for thievery and poaching, and immediately it is obvious that Reynolds does not plan to gloss over the class divisions of this feudal society, but rather make them a rich element to his story and the development of his characters. Bertelis, impetuous and entitled, is only slightly more horrible toward the serfs of his realm than is sober and serious Calard, and both come across very convincingly as young noblemen with their heads full of tales of chivalry and adventure and not a question in their mind as to their proper place on the social hierarchy.

But Warhammer is all about adventure, and Calard and his brother are soon plunged into a major campaign to repel an invading army of Orcs from a neighboring kingdom. They see their first combat, learn a thing or two about the duties of war and the realities of tactics and logistics, and rub shoulders with important and famous lords and knights from across the realm. But the Orc invasion turns out to be the least of their worries, as they soon discover the forces of chaos in the form of beastmen — think goat-headed satyrs with big axes and a taste for human flesh — are also on the move against Bretonnia. Couple that with an assassination plot against Calard, as well as one against his father, and the rediscovery of his long lost sister who is a priestess of the Lady of the Lake, and you have a fast-paced tale with enough action and intrigue to always keep the reader guessing up until the very end.

By the end of the book the stage has been set for a sequel, and it’s plain that Calard will grow from callow youth to mature and lordly knight over the passage of time. While, like most media tie-in fiction, Knight Errant shows some signs of hasty writing, the energy and natural story-telling ability of Reynolds comes through on every page to create a fast-paced adventure with never a dull moment.

I have this one on my to-be-read shelf.

If you didn’t know, as usual, this novel has been collected in an omnibus with bonus novellas. It’s out now.

My review of the second book will appear in two weeks. I see the omnibus only collects those two (and novellas like you said) — so I’m really surprised there wasn’t a third book in this series by now.