Two months ago I had the pleasure of writing up a small nostalgia piece on the Art of Will McLean, and after it hit the press John O’Neill gets me on my cell and tells me ‘It’s not enough!’. Ryan Harvey and I got a kick out of that, to be sure, both of us taking in some sun on the Black Gate L.A. corporate terrace. Such rants by John always elicit great mirth when we are both well aware of his location some 2118 miles away, meaning he has little power over us.

Still, I was both moved and intrigued when a message from Mr. McLean showed up on my blog a few days later. This pushed me to consider that my article was indeed, as John insisted ‘not enough!’. Weeks passed, and John kept at me until he finally forced my hand with a full travel itinerary showing up at the office by Wells Fargo courier and the next thing I knew I was once again on a Zeppelin with an interview in mind.

The destination… Malvern Pennsylvania, a fine and upstanding Victorian era borough of less than four thousand people that resides some twenty-five miles west of Philadelphia, and home to Will McLean. Having spent twelve years in Maryland, this was fairly familiar country to me, and I eased into a transition from the heat of L.A. to the seemingly never ending winter of the northeast.

Will and I took a meeting at Warren Tavern which resides at the General Warren Inne to which I was housed on my journey. A marvelous place, and after ordering up an outstanding rack of lamb, a sautéed colossal crab cake, and a lemon mash potato that was to die for, Will settled in for the interview I’d been waiting twenty years to give.

An Interview With Will McLean

BG:How did you first get connected with TSR? 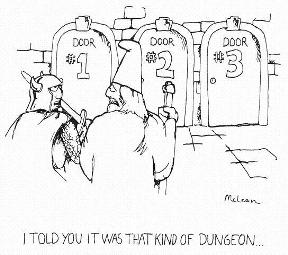 WM: My first contact with TSR was a packet of cartoons and illustrations I submitted: they liked the cartoons, and ran the first in the Dragon #17 in August of 1978.

BG:Were you already working with Dragon Magazine, and Dragon Mirth, when you did the now iconic comic images for the 1st Edition DMG?

WM: The DMG editor contacted me in March of 1979: he liked my cartoons that had been running in The Dragon but TSR periodicals weren’t willing to share any of the unpublished ones previously submitted. The cartoons that I did for the DMG were specifically for that book.

BG:Where did the inspiration for those pieces come from?

WM: Some of the ideas were inspired by things that actually happened in our
campaign. We had at least one fighter whose intelligence was lower than
his sword’s. We had a character who strapped a bag of devouring to his
belt on hopes that a thief would try to pick that particular pocket.

Whenever we met a rust monster, the mighty high level fighters would
cower behind the magic users, who were expected to beat it to death
with their staves if it survived to close to melee combat, because if forced to chose between humiliation and having a suit of +5 plate armor reduced to a pile of rust, our fighters could be relied on to make the smart choice, regardless of their nominal intelligence stats. 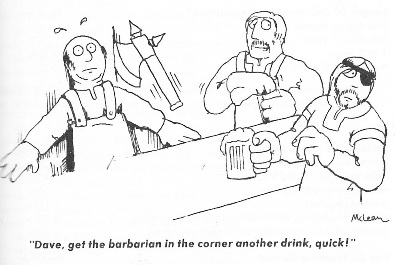 BG:It seems like only a gamer and player of D&D could write those comics. What was your experience with the game?

WM: I started playing in late 1975. We had only the original three booklets [White Box] and the Greyhawk supplement at that time. In many ways it was a good time to be a player, because the encounter tables required the evil NPCs to act like complete morons. You would meet parties composed entirely of magic users or fighters. Of course, a combined arms team of player characters would go through them like a knife through butter. The survival rate was pretty good in the early days.

In terms of experiencing a believable fantasy world, not so much. Also, the early rules were not as clear as they should have been, and magic use lacked some of the limitations that were added by AD&D, improving play balance.

AD&D was a considerable improvement, but the first edition still had a number of features I found frustrating, including the annoying alignment languages. Non-humans were essentially limited in advancement in everything but thief, and as thieves they had all their racial advantages relative to humans, you had the quirk that the non-human elite were all thieves and the PC thieves were always non-human. Fighters didn’t have a lot of combat decisions to make besides weapon choice, and if you had a good magic sword you rarely wanted to use anything else. I also found the rigid class categories frustrating. I liked the GURPS system a lot better for that.

I had stopped playing AD&D by the time the second edition came out.

The other nagging annoyance of original D&D and AD&D was the way defensive skill was entirely abstracted as hit points. The game as written didn’t entirely respect the implications of this. For example, armor class aside, a 15th level fighter had no more ability to avoid being beheaded by a stroke from a Vorpal Blade than a 1st level one.

BG:When were you approached to do the Wizardry computer game art?

WM: I knew Andy Greenberg in 1979, when Wizardry was being developed, as we were living in the same dorm at Cornell. Robert Woodhead was also at Cornell at that time. I had some modest input into the initial play-testing.

BG:Were you just involved in just the comic art for the Wizardry manual, or did you do any other art for the game?

WM: The assignment to illustrate the manual came a bit later, in 1980 or 1981, after I graduated from Cornell in 1979. In addition to the manual illustrations, I did an illustration for a print ad and executed the Wizardry logo. I did none of the on-screen art, which was in any case was pretty primitive for Wizardry 1.

BG:I know about Dragon Mirth, the DMG, and Wizardry, but are there any other McLean masterpieces that are out there most people wouldn’t know about? 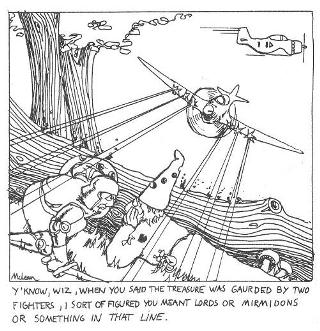 WM: Here’s a list of where my illustrations were published.

The Star Saga computer game was a fun project that unfortunately didn’t sell well enough for them to complete the trilogy. The illustrations that I did for Daily Life in Chaucer’s England were informative rather than amusing, but the book may be of interest to a gamemaster wanting to flesh out a medieval setting. A number of my illustrations from Wizardry and Star Saga are available on CafePress: searching on my name will find them.

BG:One of my favorite pieces for your characters is the hat for the cleric; where did that come from?

WM: The cleric’s helmet was based on the one worn by Eugene Pallette’s Friar Tuck in the Errol Flynn Robin Hood. I thought he made a pretty good model for a fighting cleric.

BG:Both myself and others have said that your gift was combining modern-day connections to fantasy RP settings for comic effect. Still, your comics come from the early 80s and much has changed. Do you think you would have an even easier time coming up with ideas today because of the bloom in technology?

WM: Hard to say. It’s easier to publish today, but that also means there’s more competition. Order of the Stick and Darths & Droids are both smart and funny webcomics that seem pretty well informed by the gaming experience.

BG:Do you still produce RPG inspired art, and if so, where can it be found?

WM: I’m not currently producing new RPG art. I am republishing some of my earlier RPG material, both on CafePress, as mentioned earlier, and on my deviantArt gallery.

Wow, that was very cool! I’m envious of your opportunity to meet Mr. McLean and interview him.

It’s hard to describe, but learning a bit about Mr. McLean and his involvement in the hobby that was near and dear to me 30 years ago, feels like finding an old friend. I’ve never met Mr. McLean, but his art and humor always brings a smile to my face. It’s great to see his artwork again and learn that he’s well and still creating.

Mr. McLean, if you read this, many thanks for your willingness to speak with Scott and for sharing your wonderful sense of humor with all of us.

Zach! Hey, my friend, I missed you on the Fighter article last week, but it’s nice to see you’re back!

Mr. McLean’s sense of humor and knowledge of the industry is awesome, and I’m glad you enjoyed the interview.

I’d never heard of him before, but the cartoons you just shared here made me giggle.

I’m not sure which experience was more real and memorable for me: dinner at the Warren Tavern with Scott , or seeing the Black Gate corporate Zeppelin.

Claire: Anything that makes you giggle is well worth the hours it took to write 😉

Will: There is a reason you’re a comic genius 🙂 Thanks for dropping in again, suggesting those lemon mashed potatos 😉 and giving a great interview.

News from Around the Net: 13-MAY-2011 (the Triskadekaphobic Edition) | Game Knight Reviews

[…] at Black Gate has published a great interview with the artist of those now iconic images – Will McLean. Check it out at the very least to see those cartoons […]

Quid plura? | “Now half the world hates the other half…”

[…] of writer and historical reenactor Will McLean without knowing he was the fellow whose cartoons added vital levity to the first Dungeons & Dragons books. (“Papers & Paychecks,” […]

[…] this slightly silly tone in the manual illustrations. Those were provided by Will McLean, of Dragon Magazine and Advanced Dungeons & Dragons Dungeon Master’s Guide fame, who […]