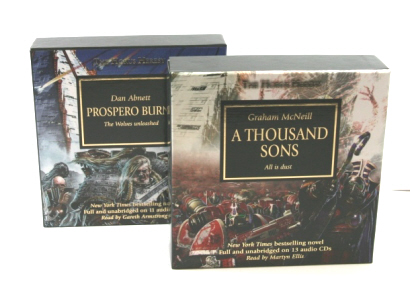 When I drove my son Tim to Blue Lake Fine Arts camp in Michigan last summer, during the five hour drive we listened to Steve Lyons’ The Madness Within and Sandy Mitchell’s Dead in the Water, both 65-minute audiobooks in the Warhammer 40,000 universe.

And boy, they were great. Both were extremely polished, with professional readers and solid production values, including subtle sound effects and rousing music.

Best of all they were terrific stories — especially the Ciaphas Cain tale Dead in the Water. Commissar Cain is a rogue with no interest in heroics of any kind, but an enviable talent for getting out of sticky situations. When he’s posted to Archipelaga, a feral ocean world slowly being pacified by the Imperium, he soon finds himself investigating the mystery of a missing squad, and facing a dangerous and unknown enemy.

Cain’s an engaging and frequently very funny protagonist, and the story was the perfect length. After that I was on the hunt for more audiobooks from Black Library.

Last week my wishes were granted. In fact, they were exceeded in spectacular fashion: with the arrival of unabridged audio adaptations of two seminal works in The Horus Heresy cannon:  A Thousand Sons and Prospero Burns, both New York Times bestsellers.

If you’re not familiar with The Horus Heresy, this probably isn’t the place to bring you up to speed. I don’t actually know that much about it either — unlike my son Tim, who’s constantly trying to school me on the highlights. 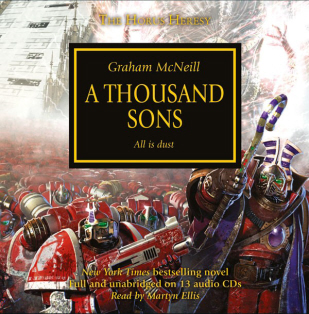 Horus was the Emperor’s right hand man in the 31st millennium, he was corrupted by the forces of Chaos, there was an epic throwdown on the throneworld of Earth, and the Empire of Man was never the same. That’s pretty much what I got from Tim’s excited recitations, but I gather there’s a bit more to it.

Like, nineteen novels, several board games, and many assorted novellas, art books and tie in products. You can scan the details at the massive Wikipedia page devoted to the Horus Heresy; me, I get dizzy around page seven of the list of characters.

But. Each of the novels stands alone, and now is my chance to try out some of the most famed books in the Warhammer 40,000 universe. Here’s the plot summary for Graham McNeill’s A Thousand Sons:

Censured at the Council of Nikea for his flagrant use of sorcery, Magnus the Red and his Thousand Sons Legion retreat to their homeworld of Prospero to continue their use of the arcane arts in secret. But when the ill-fated primarch forsees the treachery of Warmaster Horus and warns the Emperor with the very powers he was forbidden to use, the Master of Mankind dispatches fellow primarch Leman Russ to attack Prospero itself. But Magnus has seen more than the betrayal of Horus and the witnessed revelations will change the fate of his fallen Legion, and its primarch, forever.

A Thousand Sons is unabridged on 13 CDs, with a running time of approximately 16 hours. It is read by Martyn Ellis.

The boxed version of A Thousand Sons will be released on May 8, with a retail price of $40. You can listen to a sample or purchase the downloadable MP3 directly from Black Library today for just $30 here. 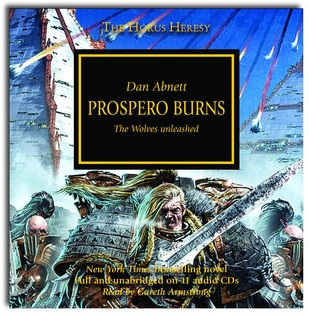 Dan Abnett’s Prospero Burns also tells the epic tale of Magnus the Red and his confrontation with primarch Leman Russ, but this time from Russ’ point of view:

Primarch Magnus the Red of the Thousand Sons Legion has made a catastrophic mistake that endangers the safety of Terra. The Emperor is left with no choice but to charge Leman Russ, Primarch of the Space Wolves, with the apprehension of his brother from the Thousand Sons home world of Prospero. The planet of sorcerers will not be easily deterred. With wrath in his heart, Russ is determined to bring Magnus to justice and bring about the fall of Prospero. Prospero Burns is an alternative point of view of the story first told in Graham McNeill’s best selling A Thousand Sons.

Prospero Burns is unabridged on 11 CDs, with a running time of approximately 13 hours. It is read by Gareth Armstrong. Like A Thousand Sons, the official release isn’t until May 8th, but you can listen to a sample or purchase the downloadable MP3 directly from Black Library now for just $30 here.

Together these two audio epics total some 29 hours.  More than enough for my next trip to Blue Lake Fine Arts Camp with Tim which, conveniently, is next weekend.

It’s a long drive, but I’m looking forward to it.

I would say that while that is certainly what Cain presents himself as, there is certainly evidence, though not conclusive, that he is being hard on himself.

For instance, at one point he claims that his sleep was untroubled by certain acts of his, and the character editting these stories in universe observes that actually, he was prone to nightmares.

And some of his explanations of how he blundered into a situation where he had to act heroically to live are — a little thin.

Thanks for the comment. I’m not too surprised… Dead in the Water is the only Ciaphas Cain tale I’ve seen so far, but it was clear even from that brief exposure that he has more heroic qualities than he lets on.

Can you recommend any others I should try?

The first Cain books were collected in two omnibuses. I recommend starting with the first.

It opens with a story where he hadn’t gotten a firm grasp on Cain’s character, he was still running off the inspiration of Flashman — IN SPACE! But by the first novel, he’s the character that fans know and love and endlessly hash over the evidence for the amazing hero with a perverse streak of modesty vs. the shameless, luxury-loving dirty coward with astounding luck, both good and bad, and a self-interest enlightened enough to illuminate a couple of planets.

That’s a marvelous mini-review of the two Cain omnibuses (omnibi?). We should have you writing reviews for us.