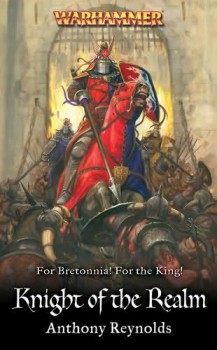 At the start of the book young Calard is himself a Knight of the Realm by virtue of inheriting his dead father’s lands. Some time has passed, and the callow youth is now something of a rake and drunkard while his one-time feckless half-brother has grown into a serious and dedicated student of the sword. From the start of the series it was obvious that these two would be heading for conflict – after all that is perfectly in keeping with the nature of Arthurian-style fiction – and events in Knight of the Realm advance this conflict to the fore rather skillfully. Reynolds has done a very good job in balancing the story elements in these books between the breathless pace and pyrotechnics demanded by the Warhammer formula, and considerations of characterization.

But a punchy-pace and pyrotechnics predominate. In Knight of the Realm’s myriad battle scenes and plot twists we are treated to daemonic engines, weird sorceries, nasty betrayals, body-swaps, Pegasus knights, the parting of the sea, and a massive siege. Calard and Bertelis discover they have a personal stake in the conflict when it becomes apparent that Elisabet – Calard’s one time love (banished after her attempted assassination of his father) – is the apparent prisoner-consort to the chief of the Norscans. And it is discovered that the Norscans’ motivation reaches beyond mere raiding and destruction to that of the acquisition of an heir for their chieftain – an heir that will be blessed by the mad powers of Chaos.

By the end of Knight of the Realm the story of Calard has nicely assumed the mantle of epic fantasy, and has become a much larger tale than anything hinted at in Knight Errant. Both brothers find themselves setting off in radically different directions in a promising foreshadowing of the next installment. Overall, Reynolds’ Knight books are proving themselves to be a great action-fantasy series with a darkly mythic undertone, and one I’d recommend both to fans of the Warhammer world and those who like the strong taste of pulp with their fantasy.

A slightly different version of this review originally appeared in Black Gate Magazine #14
__________
BILL WARD is a genre writer, editor, and blogger wanted across the Outer Colonies for crimes against the written word. His fiction has appeared in numerous magazines and anthologies, as well as gaming supplements and websites. He is a Contributing Editor and reviewer for Black Gate Magazine, and 423rd in line for the throne of Lost Lemuria. Read more at BILL’s blog, DEEP DOWN GENRE HOUND.