Human beings are sort of odd. That might be why we love examining our motives and actions so much. In fantasy, the traditional alternative races, such as elves and dwarves, have certain views about humans, and, if you were to ask any elf or dwarf you might meet how they felt, they would likely hew closely to the party line. The same goes with science fictional alien races. Their cultures have pretty much set viewpoints on how humies act, and they are generally not impressed.

One of the odd things about the humans, perhaps the most odd thing (according to these non-human viewpoints) is that we are generally given the full spectrum of viewpoints to choose from. Some of us distrust elves, and some of us have been raised with an unshakable hate for the bog-leapers of Epsilon Sigma. But then there are those humans who adore elves, and others who organize “Save the Bog-Leaper” campaigns. Humans, you see, can hold any viewpoint.

But that, obviously, is a far cry from accepting that diversity. We tend to caricature, pigeonhole, and stereotype other viewpoints, cracking that smooth continuum of opinion into a mere handful of glittering shards with massive generalizations filling in for what’s lost in the process. This makes the complexity of human thought approachable, and understandable, but it’s pretty irritating sometimes, especially when an opinion is contrary to a strongly held opinion of our own. Suddenly certain other humans are little better than bog-leapers themselves.

Outlining before writing is one small example.

This one technical step seems to find very vocal adherents on both sides of the issue, and purists on both sides can be found. When I first discovered fantasy novels, Piers Anthony was entering his heyday, and he’d have long monologues after his stories, wherein he’d meander from topic to topic. One element to these narratives was, not surprisingly, his work habits, and he vehemently set forth the idea that outlining was the One True Way. I hadn’t written much, at that time, but I sensed that outlining wasn’t going to be my preferred system.

Still, there are those out there who insist it’s the only real, professional way to write, and I’ve encountered some very stern defenders of outlining. From high school literature classes to college creative writing courses, outlining was taught as pretty much mandatory. As meticulous as I tended to be while working in the visual arts, I would sort of wing it while writing. It felt like the right way to experience the story, for me. It was fun not being entirely clear about the details of the story before they occurred, and to have my finished product better than its inspiration. But among those in my personal writing galaxy, outlining was accepted as the only really rational way to write, since it was assumed to save time in editing, revising and rewriting. 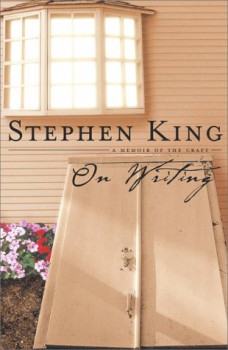 I tried it out a few times. But I could never stay on the track without neutering the voice of what I wrote. The events happened on cue, sure, but they sounded like it: a series of cues.

A term I recently came across for writers who don’t outline is pantster. “Seat of the pants” and all that. Stephen King, in his excellent book On Writing, put himself in squarely in the center of the pantster camp, even if the word hadn’t been coined yet. According to King, outlining is overrated at best, and a disaster at worst. I know that, had my own writing had to rely on my use of outlines, I’d likely not have written as much as I have. And that, I’m sure everyone will agree, would have been truly, truly tragic. Really.

Most writers, though, fall into some middle ground between the two extremes. I, for example, may jot down a list of six plot-points I want to hit before the end, or I may not (usually not). Is that an outline? If I’ve imagined the plot flow in extreme detail before I write a story, and it all comes out the way I envisioned, is that imaginary story-arc an outline? Do you have to write an outline down, and, if so, how detailed does it have to be to count as the real thing? If it’s three plot-points jotted onto a napkin, then I may be an outliner after all. If a mental outline counts, then even more so.

And that puts me sort of in the middle of the spectrum, joined, I imagine, by most other writers. We take notes as we write, and want to know sort of where this story is going, but mostly just dive in. Genre is a factor, as my upcoming project (a paranormal thriller) shows: I’ve outlined the heck out of that thing, since it has to be super-tight, and the on-rails feel isn’t so much of a problem. I suspect historical fiction involves more outlining, too, and other writing where research is more of a factor.

Still, I feel a conservative twinge when, in a writing forum, someone mentions how completely chaotic their writing sessions are, since their characters are just doing whatever they darn well please, and new twists can be introduced at the drop of a hat. I’m not so much of a pantster as that. I like to keep my plotflow disciplined. But almost every time I finish a manuscript, I’m thankful I didn’t incarnate my initial vision too accurately. The actual manuscript is usually better, and I wonder if hard-core outliners would ever feel the same way, if they’d just let loose a little.

But I guess going commando wouldn’t work for the hard-core outliner, just as the confines of an outline generally don’t work for me. But I do think that people should try the method they don’t usually use, at least once. And, since it’s all about finding a system that works for you, I suppose it doesn’t really matter who uses which method. Variety is, after all, a big part of what makes us human. So can’t we all just get along?

Truth lies at the mountain summit, but there are many ways to the height. On some days, a different trail is better than the familiar path.

At least that’s what a Kung-Fu writing instructor told me, right before he chopped a bundle of notebooks in half.

George R. R. Marting calls the two schools, “Gardeners” and “Architects”. He himself is a “Gardener”.

I think this post has the best title of any we’ve done this year.

The rest of it is pretty good, too. 🙂

Outlines can be overwhelming. What works for me is to settle on a beginning and end, which aren’t necessarily related to each other, (opens with a soda fizzing, ends with a brick hitting the ground) then write the story as though it’s a maze, and my character has to reach that end at all costs. There’s more to it than that, of course, but if it helps any writers here, give it a try. 🙂

I resist both tags, just because I had already found out what kind of writer I was many years ago, after trying a few different approaches. I like to write outlines, it’s an enjoyable part of the process for me, and if I don’t write one, I will never finish. But I have no problem with anybody doing it the other way. Listen to four different famous authors, get four different views.

The thing that makes me an outliner is that I tend to write aiming for a particular effect, a particular scene, a particular payoff.
Trying to get that effect both motivates me to write and gives my would-be narrative its form.
How could I trust I’d get anywhere near my intended effect if I sought it at random?

I tend to write like an anthropologist, in the sense of digging around in my unconscious for the character who will be the key informant in my field research, and then I hang around with that character, observing, until s/he eventually introduces me to everybody s/he knows. Then it’s mostly a matter of eavesdropping…and time travel through their lives, which is weirder.

The first time I hear Stephen King talk about leaving a lot of his writing process to “the guys in the basement,” I knew exactly what he meant, and when I learned that Robert Louis Stephenson had carried a whole virtual theatre troupe around in his dream-mind, I felt so much less like a writing-process freak.

Outlining is lovely. My characters all tell me so, whenever they look over my shoulder and advise me on how to fix my outlines.