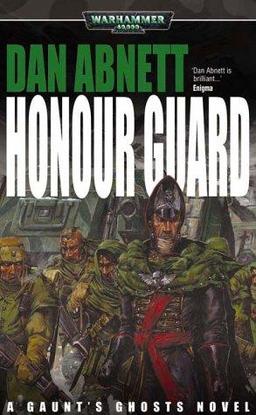 The faith of the Imperium of Man — the only faith, thanks to a massive Inquisition — is centered around the God-Emperor of Mankind, who sits upon his Golden Throne on Holy Terra. Whether he’s a divine being incarnate, or a man who somehow gained god-like powers, is a question I don’t know the Warhammer 40K lore well enough to answer, but the emperor is kept eternally alive by the arcane machinery of the Golden Throne, and his massive psychic energies provide a beacon which allows mortal pilots to navigate spacecraft through the treacherous realm of the Warp.

The Emperor stands as the sole God, but there’s room in the Imperial cult to include various other figures, “saints” who are venerated for their faith in the Emperor and their deeds in his service. Given the Imperium’s nature, and the character of the WH40K universe in general, these saints are primarily warriors. One such is Saint Sabbat, the warrior woman who originally won the Sabbat Worlds for the Imperium, and in whose name the present-day (sometime in the 41st millennium) Sabbat Worlds Crusade is being waged.

We catch up with the Ghosts as they’re locked in street-to-street combat on the Saint’s own homeworld of Hagia, fighting the Chaos fanatics who have claimed the world’s holy cities as their own. This particular band of Chaos worshippers is particularly keen on denigrating the Imperial faith, so they’ve taken on the name Infardi, formally used by pilgrims to Hagia, and are heavily tattooed with blasphemous scenes involving the Emperor and various others figures of worship.

The first 40 pages or so is classic Ghosts material as the men (and now women) of the Tanith First-and-Only fight the Infardi street-to-street in Hagia’s Holy Doctrinopolis. The Chaos worshippers are well-entrenched, but the Tanith and their allied regiments are making steady progress at rooting them out with the aid of limited bombardments and divisions of the Pardus Armour Corps. 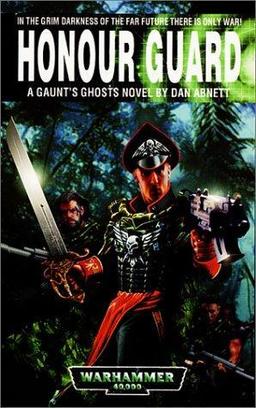 Abnett has a talent for making even the most comparatively mundane scenarios enthralling. Alongside various Ghosts, we taste the rock dust and smoke of bombardment, and smell the metallic stench of las-rifle fire. Abnett either has a firm grasp of small-squad tactics or is a master of faking it, because the minor engagements between Ghost platoons and Chaos cultists are one of the series’ enduring pleasures.

One sequence in the opening of Honour Guard sticks in my memory. It involves Major Rawne’s platoon going room-to-room in an ancient stone palace, rooting out small pockets of Infardi troops one corridor at a time. In a few pages, we get to see Rawne’s skill as a combat commander, his reliance on partner-in-crime Feygor, and his misgivings at having Vervunhive women added to the Tanith, even as we see how effective some of those women can be. We also get to see Rawne execute a bold manuever that involves going out one window and climbing sheer stonework over to another to get the drop on a group of Infardi.

Gaunt’s strategy is to advance cautiously, doing everything he can to spare the holy sites and relics of the city. But this is too slow for Imperial high command. They order Guant to advance. The Infardi spring their trap, turning the temple district of the Doctrinopolis into a warp-fire beacon and immolating thousands of Guard in the process. Imperial astropaths quickly determine that the unnatural flames are acting as a beacon, sending a communication into deep space to summon a massive Chaos fleet, due to arrive on Hagia in a matter of weeks.

The holy world of St. Sabbat has been defiled, a critical battle has been lost, and a hole has been ripped through the Imperial forces. Lord General Lugo shifts blame for the disaster onto Gaunt’s shoulders. He’s faced with losing his rank, and the Ghosts are faced with being disbanded and scattered among other regiments. In the following days, we’re shown a side of Gaunt that has only been implicit until HONOR GUARD: his ability to sink into black, liquor-fueled depression. Ibram Gaunt possesses a profound faith in the Imperial crusade and, in particular, in St. Sabbat herself — a faith which seems to have failed him. In his drunken depression, he reads her writings over and over, seeking and failing to find guidance. 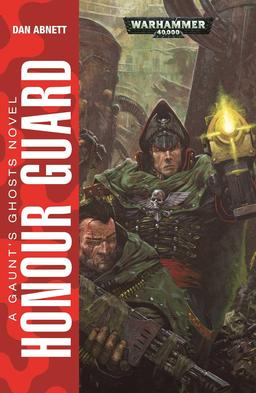 Rather than attempt to hold Hagia against the approaching Chaos re-enforcements, the Imperial troops begin an evacuation. However, there is one loose end: the relics of St. Sabbat herself, including her holy bones, are kept at a temple high in the nearby mountains, and must not be abandoned to Chaos. Gaunt is offered a final mission as an honorable coda to his career: Lead his Ghosts into the mountains, along with Pardus tanks, as an honor guard to retrieve the relics.

The bulk of Honour Guard plays out as a road trip: The Ghosts and the Pardus Armour Corps fighting their way through ever greater Infardi resistance to reach the mountain temple and return in time to join the evacuation. This expedition follows an ancient pilgrimage route for the cult of St. Sabbat, and for Gaunt, the mission is precisely that — a pilgrimage to absolve his failure and restore his faith in his ability to lead the Ghosts.

In the first three books, Gaunt’s depths are primarily his virtues: He’s stalwart, brave to the end, and, in contrast to many Imperial officers, invested in both the happiness and the lives of his men. Honour Guard gives us a couple slightly different sides of him. He’s an idealist, and when his ideals fall short, it’s easy for him to fall back into alcohol-soaked depression. He also lives in some tension with his actual role in the Imperial Guard. Commissars like Gaunt are normally the officers in charge of ideology and discipline among the troops, with the duty to preform battlefield executions on insubordinate men. This duty clashes with Gaunt’s tendency to lead by example rather than by force, and to genuinely love his men. This is a conflict which is further explored in the next two Ghosts novels, and potentially beyond (at this writing, I’ve only read through Straight Silver).

The issue of faith is also raised in more depth, particularly when a small band of Ghosts who have been left behind at the Doctrinopolis begin to experience visions they believe are sent from Saint Sabbat herself, calling them to follow Gaunt’s Honour Guard into the mountains on a suicide mission they don’t fully comprehend. This latter party just happens to include the men most notable for their humanity: Warm leader Colm Corbec, jovial giant Bragg, and Dorden, the Tanith medic who refuses to take a life for any reason. They’re guided by a young woman who is part of Hagia’s priestly class, but finds her faith increasingly assailed by the sheer hopelessness of war.

As far as action goes, Abnett turns his skill at writing small-unit engagement towards clashes between armor squadrons on the road into the mountains with excellent results. I felt like a had a good feel for the interactions between tanks and infantry, the power of a tank as a fighting platform, and the sheer mayhem of armored squadrons meeting head-on. The only fault I can find is that the tanks, which would presumably be familiar to WH40K gamers from the tabletop, aren’t described in any particular detail — I wasn’t sure what the difference was between an Imperial Chimera and a Manticore, or why a Baneblade super-heavy tank is such an overwhelming threat. 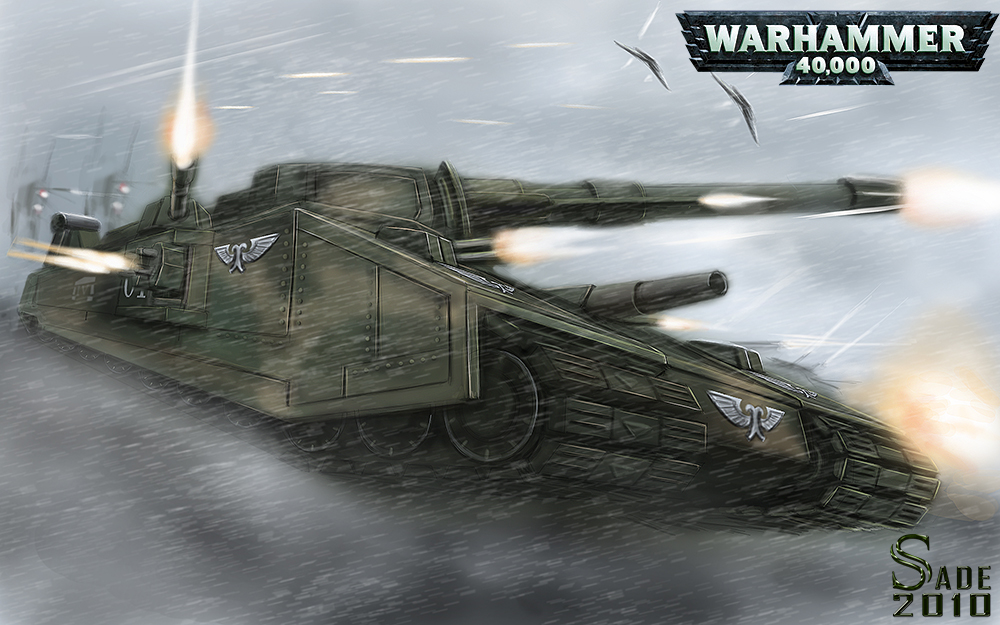 On the side of small, human moments (an ongoing theme in the Ghosts novels), I was particularly touched by a scene where “Try Again” Bragg sits down with Vamberfeld, a guardsman suffering from severe PTSD, and learns from him how to skip stones across a river. It’s a gorgeous picture, marked by sunlight and serenity, where Bragg shows his playful side, and the other guardsman has a moment of relief from his inner demons.

And I know I’ve harped on this, but how remarkable is it to see a realistic, compassionate portrayal of PTSD in a significant character in a Warhammer novel, of all places?

One of my frustrations in writing these reviews is how hard it’s been to give a sense for how much I enjoy the wide cast of characters. I haven’t touched on the two new additions the Ghosts pick up on Hagia — a new commissar, Hark, and a wise, wise-cracking priest named Zweil — nor have I been able to go into the kind of detail I’d like to on the continuing arcs of characters like “Mad” Larkin, Gol Kolea, or Colm Corbec, or even mentioned the introduction of the sociopathic Lijah Cuu. Take my word for it that, by this point in the series, I could easily name a dozen characters I love, each with distinct personalities and roles to play as the story rolls ever onwards.

Abnett is also more than willing to play the long game in seeding plot elements that will become important in future books. Lijah Cuu’s feud with Larkin doesn’t become a major point until the next novel, The Guns of Tanith, but it’s first suggested here in Honour Guard, as are Gol Kolea’s defining conflict and important questions about Gaunt’s balance between compassion and authority, as well as the fate of the Crusade as a whole.

I’m reading these books as I review them, and I’m looking forward to my continuing adventures alongside the Ghosts!

Next up: The Guns of Tanith, where things get bloody.