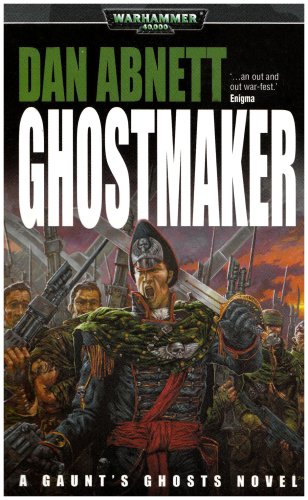 In the inaugural series installment, Warhammer 40K: First and Only, Dan Abnett introduced us to the Tanith First regiment of Imperial Guardsmen and their iron-willed commander, Colonel-Commissar Ibram Gaunt. That novel had Gaunt as its clear protagonist. A series of flashback chapters sketched out his past: Losing his father to Ork hordes in boyhood, growing up a ward of the Imperium, beginning a military career, and finally avenging his loss in a chainsword duel with the man who left his father to die.

We also got an introduction to the Tanith, a thousand men who together represent the only survivors of their homeworld. In First and Only, we saw them largely through Gaunt’s eyes, and received a comparatively cursory introduction to the various personalities among them. In Ghostmaker, Abnett establishes the men of the Tanith in greater depth, laying out a cast of battle brothers as rich and intriguing as any created by Bernard Cornwell or C. S. Forrester.

Ghostmaker is a fix-up novel. The brief “present-day” chapters are connective tissue for a series of short stories from the regiment’s past, each of which centers around an individual soldier of the Tanith and gives him a moment to shine. Along the way we learn more about what the Ghosts lost on their homeworld and how each of them lives with the horrors they confront on 41st millennium battlefields.

I’m normally ambivalent about fix-up novels. I’ve read good ones (see Tears of Ishtar by Michael Ehart for a great example), but in general I feel they end up too fragmented to be read as a novel and too connected to read piecemeal, the way I would normally approach a short story collection. Ghostmaker is a stand-out in the field, and ranks as my favorite of the first trio of Ghosts novels.

For those not familiar with the WH40K setting, some background is in order. The setting is literally the 41st millennium (A.D., presumably), and humanity’s domain has reached across the stars. However, the threats facing it are almost literally infinite. Interstellar travel is possible only by passing through the Warp, a hell-dimension that exists alongside ours. The Warp is literally crammed with daemons. Those daemons range from mindless predatory beasts to princes of daemonic legions and, ultimately, to dark gods of almost incalculable power. Collectively, the Warp, its gods, and everything associated with them is known as Chaos. Mortal servants of Chaos range from genetically modified super-soldiers — Space Marines — who sold their souls to evil, down to ordinary men and women who have also sold their souls to evil. The forces of Chaos are engaged in a perpetual war against the Imperium. 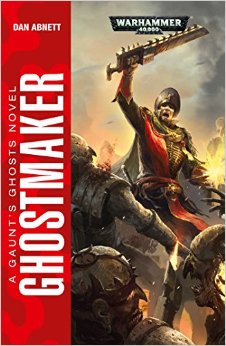 There are also various alien civilizations, collectively known to the Imperium as xenos, who are also, to one degree or another, inimical to human life. Orks (big, green, muscly) roam between the stars in massive warbands, looking for loot and a good fight. Eldar (let’s be blunt — space elves) pursue their own mysterious ends. Dark Eldar pursue torture, slaves, and slaves to torture. Tyrannids (think xenomorphs from Aliens) prowl around in vast Hive Fleets looking for their next meal.

With a list of enemies like that, it’s not surprising that the Imperium of Man functions primarily as a war-machine. The chapters of loyal Space Marines are the heavy-hitting storm troops, while billions and billions of mortal men with tanks, rocket launchers, fighter jets, and small arms collectively make up the Imperial Guard. Every planet in the Imperium contributes to the Guard in conscripts or in resources, and, in turn, the Guard bleeds and dies to hold back the endless forces of destruction.

Their uniting faith is in the Emperor of Mankind, who has been kept barely alive for ten thousand years on his sustaining throne, and is worshiped as a god. The cult of the Emperor is vigorously enforced by a system of inquisitors and witch-hunters who guard against any hint of Chaos corruption. Various saints — primarily war leaders of the Imperium — are also honored by the Imperial cult.

WH40K purists will probably take issue with my broad generalizations, but that’s the gist of what you’ll need to know as we plunge deeper into the series.

The stories of the Ghosts are told against the backdrop of a sweeping Imperial campaign to retake an entire sector of worlds recently overrun by Chaos armies. The number of planets in the Sabbat Worlds offers any number of settings for military adventure, and in Ghostmaker, Dan Abnett starts to take advantage of the full range of possibilities. Rather than go through every story one-by-one, I’ll highlight a few that stand out in my memory.

The title story, “Ghostmaker”, is a flashback to the founding of the Tanith First-and-Only and the destruction of their world. It gives insight into Gaunt’s decision to pull the regiment off world and save a thousand men rather than allow them to fight a hopeless battle to save their homes.

That thread is picked up in “Permafrost”, which finds the Ghosts fighting an Ork warband on the ice-locked world of Typhon Eight. Nightfall finds them scattered, and Major Rawne, the regiment’s third in command, is wounded and forced to take shelter in an ice cave with the man he hates most in the world: Ibram Gaunt. During their tense night together, with Orks prowling the darkness all around, Rawne struggles with his desire to murder Gaunt for robbing him of the chance to die defending his homeworld. Morning forces them to cooperate by commandeering an Ork truck to carry them back to Imperial lines. A high-octane chase over the ice, with a mechanized warband in pursuit, is made all the more intense by the Orks’ failure to understand concepts like “brakes” or “suspension.” 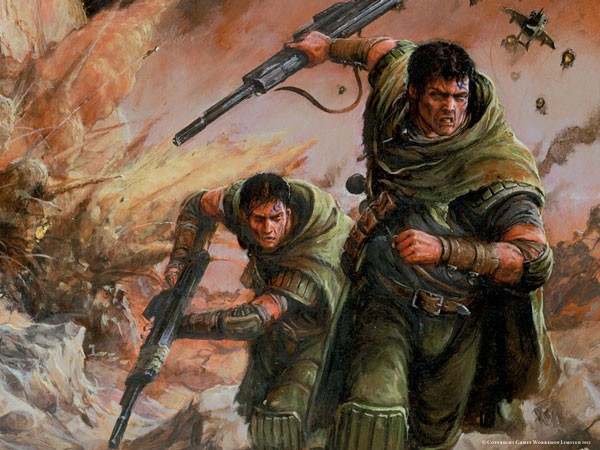 I’m often bothered by books with a heroic protagonist, and several supporting characters who can be split into two groups: Good Guys, who universally like and praise Our Hero, and Bad Guys, who don’t appreciate his awesomeness. The Harry Potter series slipped into this occasionally, and it’s one of the reasons I can’t stand the Kingkiller Chronicles. So I particularly appreciate that Rawne is portrayed as a brave warrior who cares for the lives of his men… and still wants to see Gaunt bleeding out in the snow. Gaunt, too, doesn’t fall into the trap of undermining or sabotaging Rawne. I think it’s true that you can judge a person’s true character, not by how they treat their friends, but by how they treat their enemies.

I suspect that “Blood Oath” is unique in the annals of WH40K fiction. Its protagonist, the regiment’s chief medic Dorden, is a doctor, not a killer, and explicitly refuses to arm himself or participate in combat. What’s more, this particular story is focused on healing rather than slaughtering. While the Ghosts are falling back in the face of a Chaos advance, Dorden comes across a farmhouse where several wounded men from the Volpone Bluebloods are holed up, too injured to be moved. Dorden insists on staying behind to care for them and risks being caught by the Chaos army, which is notoriously fond of torture, human sacrifice, and general mayhem. This humanitarian mission is aided by several Ghost volunteers who agree to wait out the night with Dorden and pray for an Imperial advance the next day to save them.

There’s fighting, certainly, as the Ghost volunteers fend off attacking Chaos troops, but the focus is on Dorden’s selfless commitment to saving all he can. “Leave no man behind” is a motto for the U.S. Marines, but the armies of the Imperium are usually more pragmatic. This kind of humanity is something I particularly love about the Ghosts novels. The wounded men are even from a regiment, the Bluebloods, which has previously tangled with the Ghosts, even to the point of killing some of them — in fact, the rivalry between the Ghosts and the Bluebloods is a significant subplot in the various tales that make up Ghostmaker. Dorden is perhaps the only Ghost to make friends among the Bluebloods by putting his life on the line for them.

The novel is capped by a novella-length section that delves into the more supernatural elements of the setting. The climactic battle is set during a warp-storm, when daemons spontaneously manifest on the battlefield, and involves the alien Eldar fighting more-or-less on the side of the Imperium. Abnett also manages to slip in a fantastic bare-knuckle fist-fight between Corbec and a beefy Blueblood officer that ends when they find mutual cause in killing a daemon hound with their bare hands.

Episodic as it may be, Ghostmaker is a strong follow-up to the promise of First and Only, and succeeds in establishing a rich cast of soldiers for the books ahead.

Sean T. M. Stiennon is a writer, martial artist, and doer of mighty deeds who makes his home in Madison, Wisconsin. He has much to learn. His last review for us was Where Extra-planar Daemons and Dark Gods Play: Gaunt’s Ghosts: First & Only.

[…] up: a look at the second novel in the series, Ghostmaker, in which we learn more about the individual men of the Tanith […]