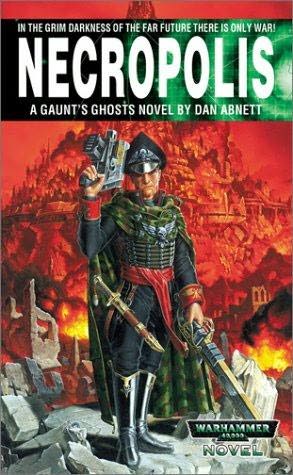 Necropolis marks a turning point in the Gaunt’s Ghosts series for a few reasons. It’s the first book written entirely as an original novel rather than an expansion of previously published short work. It also broadens the scope of the first couple books in covering an entire Imperial Guard campaign from the first rain of shells to the final confrontation with a Chaos warlord, as the Ghosts join in the defense of a hive city besieged by a horde of millions.

Hive cities are one of the key features of life in the 41st millennium, and they’re exactly what the name implies: Enormous cities where millions, if not billions, of Imperial citizens live elbow-to-elbow in habitation towers most easily measured in kilometers. They’re usually built around some kind of industry, whether raw resource mining, mass agriculture, or manufacturing, and exist almost as worlds unto themselves. Hives have their own aristocracy, their own independent militaries, their own networks of corporations and guilds, their underclasses and underworlds.

Vervunhive, on the Sabbat Worlds planet Verghast, actually seems like a reasonably nice place to live, by 41st millennium standards. That is until warning claxons fill every corner of the hive, and a merciless barrage of shells starts falling from guns placed over the horizon.

Panic spreads through all levels of the hive as we skip viewpoints from Agun Soric, a manufacturing plant supervisor, to Gol Kolea, a deep-shaft miner, and from Tona Criid, a gangster from the hives depths, to Salvador Sondar, the half-mad ruler of the hive. An unstoppable tide of armor follows on the heels of the shelling, smashing the attempted counterattack by the Vervunhive defense regiments, and only the hive’s defensive energy shield keeps it from being overrun. Their neighbor, Zoica, has been corrupted by the dark powers of Chaos, and now the entire population and industrial might of that rival hive have mobilized to claim the rest of the planet.

With the hive in flames, and the situation grim, the Vervunhivers send out a distress call for the Imperial Guard. Among the responders are the proud warriors of the Royal Volpone Bluebloods, the Roane Deepers, the Narmenian Armor Corps, and the modestly sized regiment known as the Tanith First-and-Only.

There’s a truly impressive scope at play in Necropolis. Abnett juggles a cast of at least two-dozen, many with their own viewpoint segments, compacted down into a standard 350-page novel. This allows him to portray the battle for Vervunhive from top to bottom and across all its various fronts. Our hero, Ibram Gaunt, becomes enmeshed in fighting corruption inside the upper echelons of the hive leadership, while many common hivers, including working men Gol Kolea and Agun Soric, assemble scratch companies of civilians fighting with guns, makeshift explosives, and the heavy machinery and axe-rakes of their mining work. Mad Larkin, the Tanith sniper who only trusts what he can see through his scope, finds himself deep behind Zoican lines, fighting a covert battle from sniper-nest to sniper-nest while his sanity slowly wears away. 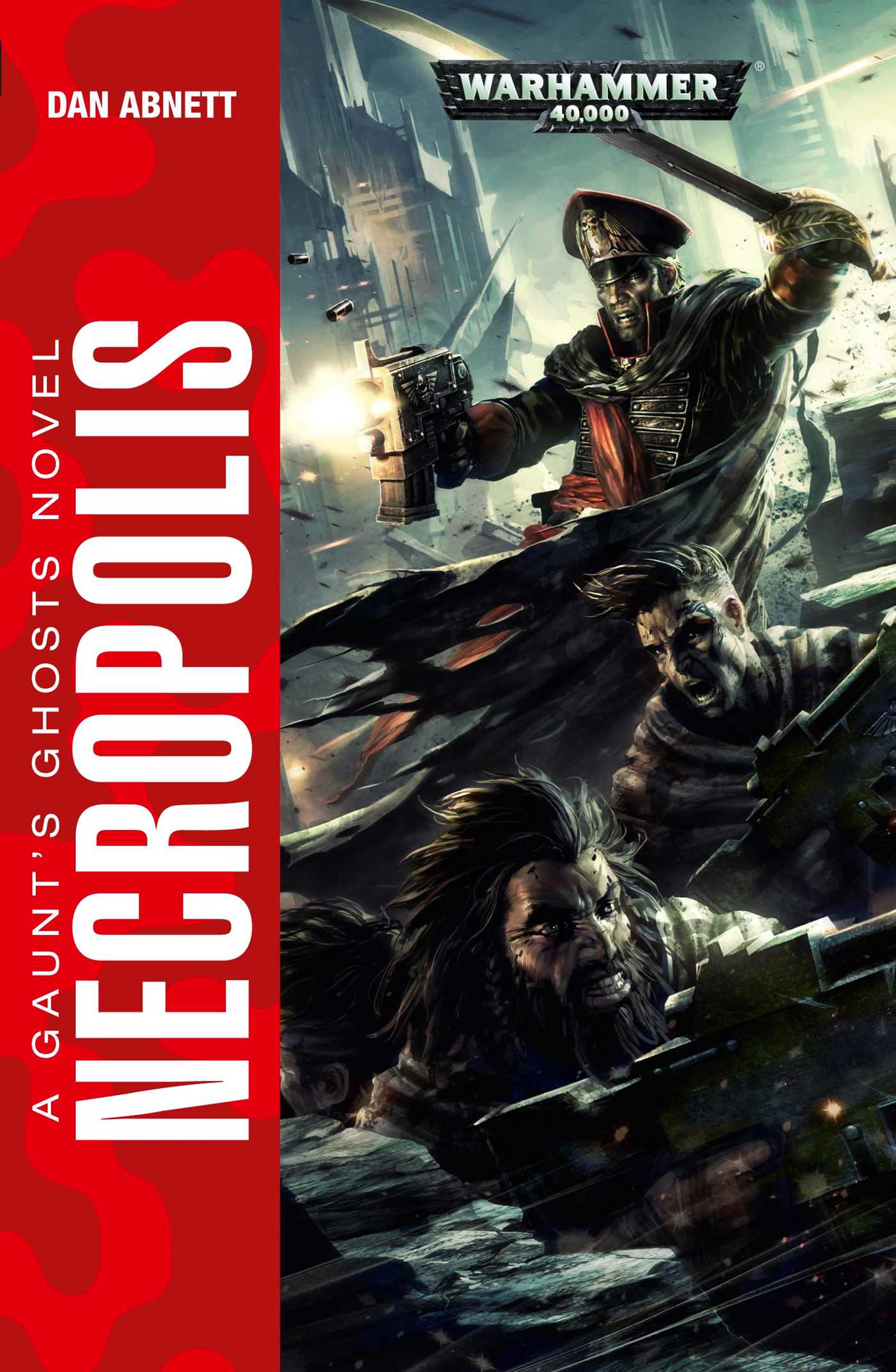 The actual battles are more than equal to the standard Abnett set in the first two books. The Zoicans have deployed their full industrial might in an all-or-nothing attack, which means that they’ve brought a full range of tanks, including heavily armored crawlers the Ghosts take to calling “flat-crabs.” The walls of Vervunhive are assaulted by enormous moving towers that hook onto the walls and disgorge troops by the hundreds under the cover of chattering guns and sweeps of burning promethium. Attempts to listen in on the Zoican transmissions yield only bursts of static or, worse, the name of the Chaos warlord Heritor Asphodel, chanted like a prayer on every wavelength.

The kind of war Abnett evokes — and which, more generally, the WH40K setting seems to shoot for — resembles more the battles of the World War II than anything more futuristic. I’m no soldier, and only very distantly a military historian, but the way Abnett writes about everything from small-unit tactics to mass tank assaults is never less than convincing. It actually ends up being so realistic that there were moments when I worried that the fantastic setting was in danger of getting lost.

Abnett’s realism actually provides contrast to the limited doses he provides of more fantastic material, and heightens their effectiveness. The Zoican forces advance in a tide, their features concealed beneath ochre helmets daubed with bestial faces, and when Mad Larkin pulls off one of their helmets out of morbid curiosity, we’re not told exactly what he sees. We only get his horrified reaction, and understand that the Zoicans are no longer entirely human. The final confrontation with Heritor Asphodel, and his bodyguard of shadow-daemons, is handled with similar restraint and effectiveness.

Writing this third review, I’m starting to wonder if I’ve undersold the depth and complexity of the WH40K universe. Previous to the Gaunt’s Ghosts books, I’d only read a handful of novels and stories, which I tended to think skipped over the subtleties of character and human interaction to get to the next chainsword showdown. I’ve hammered on this before, but Abnett’s work is forcing me to reevaluate that impression.

In Necropolis, he not only takes pains to show us what life is like for common hivers — before and after the war — but also gives us several female characters, both combatants and non, as well as not one, but two romantic subplots. One for Gaunt, one for Trooper Caffran.

Yes, I know. In a WH40K novel. I just about dropped the book in disbelief.

What’s more, the plight of the Vervunhivers, fighting to defend their home from obliteration, strikes a chord with the Ghosts, who have already found themselves at the bitter end of a similar story. There’s something very moving about how the Ghosts, professional warriors with nothing to particular to live for, join forces with the civilians and soldiers of Vervunhive, who still have a home to defend.

In fact, when the ashes settle, and Vervunhive stands in ruins, having become the necropolis of the title, several of the Vervunhivers actually join the Tanith First-and-Only, to replace some of the losses the Ghosts have suffered across various battlefields. Gaunt also comes out of it carrying the power sword of Hieronymo Sondar, a priceless relic of the hive’s ruling house awarded to him for his actions in the war. 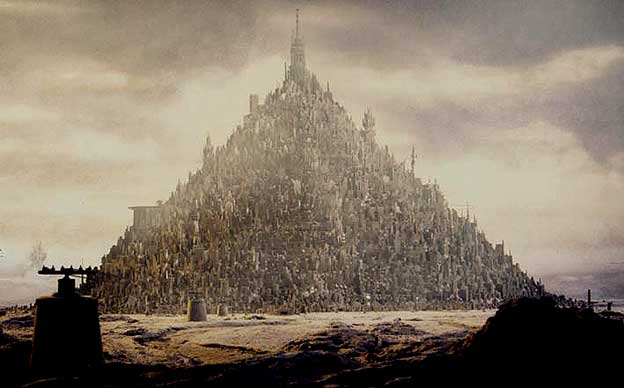 I think it’s a further testament to Necropolis’ strengths that, this far into the review, I still haven’t touched on a lot of the cool stuff. Roaring battles, plenty of characters to love, a fine contrast between quiet moments of compassion off the battlefield and glorious heroism on it. Necropolis is a dynamite third installment. So far in my reading (I’m currently on book five), this is a series which grows stronger with every book.

Next time: Honuor Guard, in which we delve more deeply into Ibram Gaunt’s inner life, while also thrilling to a running tank battle through white-capped mountains.

(Note: The omnibus edition of the first three Ghosts novels also includes a short story, “In Remembrance,” about an Imperial war reporter arriving in the aftermath of the Vervunhive War to interview the Ghosts and write a story about their heroism. It’s a fantastic coda to Necropolis, and to the entire first trilogy, reaching a level of quiet sadness that, again, I never expected to find in anything bearing the Black Library imprint. It’s worth seeking out.)

Maybe I missed it…

But have you done Eisenhorn?

I liked those quite a bit.

I haven’t! Given how much I’m enjoying the Ghosts books, though, pretty much all of Abnett’s work is on my ever-growing list. A couple Eisenhorn references crop up in the Ghost books, particularly in GUNS OF TANITH.