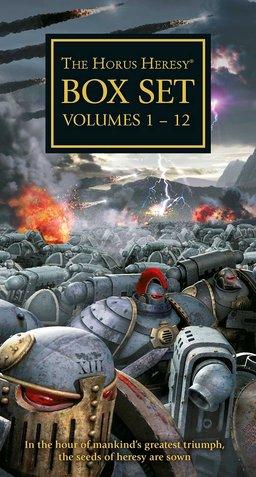 Okay, this one was a bit of an indulgence.

Back in January, I wrote about how much I’ve been enjoying the delightful Horus Heresy audio books from Black Library. A sweeping dark fantasy featuring sorcery, magic, undead legions and ruinous Chaos powers secretly maneuvering to bring about the downfall of the Imperium of Man in the 31st Century, they’ve been something of an occasional guilty pleasure for me. But then I listened to Ben Counter’s riveting Galaxy in Flames — the third book in the sequence, and the one in which the Hersey is finally revealed in the brutal massacre of loyalist legions on Isstvan III — and I knew I was going to have to knuckle down and buy the entire set.

So I was delighted to discover that I could get the first twelve novels of the Horus Heresy — all 5,456 pages! — in a single deluxe box set. The series serves as background to the popular Warhammer 40K game, and is written by Dan Abnett, Graham McNeill, Ben Counter, James Swallow, and others. Several novels in the series have hit the New York Times bestseller list. In addition to the first dozen novels, this deluxe set also includes Whispers of Heresy, an exclusive anthology of novellas originally released exclusively as audio dramas.

A new Imperium is being forged across the galaxy. After millennia of isolation and localised conflict, the Emperor of Mankind has risen to rule holy Terra, and now commands his Space Marine Legions in reuniting all the lost colonies of humanity. At the forefront of his armies are the primarchs — post human warriors and leaders without equal, created from his own genetic template. This Great Crusade is all but over when Horus, the Emperor’s first primarch son and Warmaster of the Legions, becomes part of a wider plot by the primordial forces of Chaos to corrupt mankind and bring fresh ruin to the galaxy. Swaying some of his brothers to his cause and facing others openly upon the field of battle, Horus has set his eye upon the Throne of Terra itself, and will not hesitate to let the Imperium devour itself in the bloodiest civil war in the history of mankind…

The Horus Heresy Box Set was published by Black Library on October 14, 2014. It contains a dozen paperback novels (plus one anthology) totaling 5,456 pages, priced at $125. Several online outlets are selling it at a discount; I was able to buy my copy for around $80. Well worth it if you enjoy science fantasy, or good military SF of any kind.

[…] wasteland west of “Z” at your local book retailer. Our very own John O’Neill has covered several books in the ongoing Horus Heresy saga, and odds are that even if you’ve never picked up a book, you’ve noticed the Black Library […]