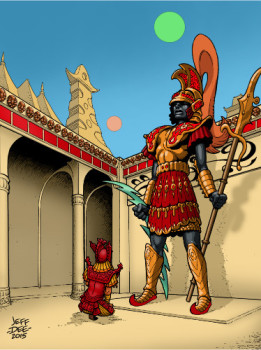 In my opinion, the hobby of roleplaying has only ever produced two fantasy settings to rival Middle-earth in terms of depth and creativity: Greg Stafford’s Glorantha and M.A.R. Barker‘s Tékumel. Of the two, I suspect Glorantha is the better known, at least in the roleplaying world, if only because the RPG with which it was long associated, RuneQuest, was very successful, particularly in Europe (where it was, at various times, more popular than even Dungeons & Dragons if you can believe it).

Tékumel, on the other hand, has languished in semi-obscurity, despite the fact that the RPG in which it first appeared, Empire of the Petal Throne, was published only a year after D&D, making it one of the most venerable of its kind. Part of the reason why that is the case is that, unlike most fantasy settings, Tékumel owes little to the histories or legends of the West’s Classical and Middle Ages. Instead, its primary inspirations are ancient Egypt, pre-Columbian Mesoamerica, and Mughal India – all seen through the lens of sword-and-planet writers like Edgar Rice Burroughs and Jack Vance. Consequently, the setting’s peoples, flora, fauna, mythologies, and elaborate social systems are quite unlike those to which most roleplayers (especially in North America) are accustomed. Add to that the unfamiliarity of Tékumel’s constructed languages – Barker was a professor of linguistics – and you have a recipe for supposed inaccessibility.

I think that’s a shame – and not just because I’m personally very fond of Tékumel.

The truth is that Tékumel’s “inaccessibility” is (mostly) on the surface. The names (like Mu’ugalávya and Tsatsayágga, to cite two examples) and scripts are intimidating at first, I’ll admit, but, with time and effort, they become much less so. The same is true of Tékumel’s lengthy imaginary history and its complex religions and societies. Once those initial barriers are overcome, what you’ll find is a fantastic setting filled with amazing opportunities for adventure, from treasure-hunting expeditions into subterranean labyrinths to cutthroat imperial politics to visitations to other planes of existence.

Even so, overcoming Tékumel’s initial alienness isn’t easy, as there is no straightforward way to learn about the setting, which is why I am so very pleased to see the release of Choice of the Petal Throne.

Choice of the Petal Throne is a 124,000-word “interactive novel” written by Danielle Goudeau and published by Choice of Games, a company that specializes in these electronic choose-your-own-adventure games. In Choice of the Petal Throne, the reader is cast in the role of a military officer commanding troops in the midst of the civil war tearing apart Tsolyánu, the titular Empire of the Petal Throne. The interactive story unfolds in small chunks – typically two to five paragraphs – that often end in a question with several possible answers. As the reader answers these questions, the subsequent text of the story changes to take into account those answers. For example, early on, the viewpoint character kneels before a statue dedicated to his patron deity. Six different options are offered to the reader, each of which also includes some basic information from which to make the choice.

Each answer/choice affects the unfolding story, sometimes in small ways, sometimes in significant ones, but they all have some impact. Early on, many of the choices concern the reader’s character – his name, his sex, etc. – while later choices are more about courses of action, as the civil war rages on and the character is thrown headlong into its battles. In addition to altering the text to reflect the reader’s choices, the game also builds up a “character sheet” that displays information about the viewpoint character, like his physical stats and social ties, as well as how “noble” he is according to the Tsolyáni code of conduct. There is also a glossary of terms that updates, as the reader comes across Tsolyáni words and concepts that are integral to the story and the decisions presented therein.

What I like most about Choice of the Petal Throne is the way that it throws the readers directly into Tékumel without much in the way of exposition. Instead, social and cultural differences from traditional fantasy worlds are presented organically, as the character finds himself in circumstances where they are relevant. In this way, the reader is slowly immersed in the setting, but he is immersed nonetheless. Indeed, many aspects of the unfolding story only make sense in the context of Tékumel and its unique culture. To my mind, this makes it a superb introduction to the setting, one that does a better job of “selling” what makes Tékumel compelling than would many books filled with social and cultural details.

Make no mistake, though: Choice of the Petal Throne is only a “game” in the same sense that a choose-your-own-adventure book is a game. There are no graphics – not even illustrations – or sound effects. It’s just text on a page and can be completed in about two to three hours of dedicated reading, depending on how quickly one reads and how easily one can make decisions. There is some replay value in that certain decisions have significant impacts on how the story unfolds; choosing differently on a subsequent read-through therefore changes what happens to the viewpoint character. It’s also important to note that, once a decision is made, there’s no going back. The game provides no means of altering a choice once made. I personally like that, since it lends weight to one’s decisions and elevates Choice of the Petal Throne above many other computer games where nothing is irrevocable and it’s always possible to reload before the point one made a decision that turns out badly.

That said, the overall story is still largely the same regardless of the choices one makes. That’s perfectly understandable, given that it’s “only” 124,000 words long. To provide for truly open-ended play would have required ten times that verbiage or more. This is not a complaint, but I feel it’s necessary to point out that this is no “sandbox;” there are limits to the reader’s options and thus his character’s as well. My only real complaints about Choice of the Petal Throne are small. There are a number of typos and formatting issues (like paragraph spacing) throughout the text that bugged me without detracting from my overall enjoyment. I genuinely had a lot of fun reading through the story – so much so that I almost immediately played a second “game,” this time making very different decisions to see what would happen instead. At $2.99, I think it’s a worthwhile purchase, both as a brief diversion and as an introduction to Tékumel. I very much hope that Choice of Games will produce follow-ups to Choice of the Petal Throne, as I think it’s just the kind of low-cost, easy-to-grasp entry point that M.A.R. Barker’s magnificent fantasy setting has long needed.

Ah, wonderful timing. I just started exploring EPT and this looks like a promising start.

I would have guessed Tekumel was the better known. In the late ’80s on the Internet, more people had probably played in Glorantha, but Tekumel was legendary.

Hah! What internet? Bulletin board systems? Of course the Internet and computer modems go back decades, but the average computer owner in the ’80s did not even know what the Internet was!

I do have to get this sooner rather than later.

We’re in a blessed era where many of M.A.R. Barker’s Tekumel fiction books are readily available. Barker’s Man of Gold was my favorite fantasy novel of the ’80s, and it’s now out in a digital format. A good place to begin for those new to Tekumel.

Heh. No BBSes or services, James. Just the Internet. Gaming debate was…vigorous. (“Hero vs Gurps” could go on for months.)

That is the best Jeff Dee painting in the past 30 years.

Hey, I’ve actually heard of this! I came across it when reviewing a Riftworld story and found out that Raymond Feist more or less repurposed Tekumel without Barker’s permission and used it in his book series.

Progress is made in small steps | The Tékumel Foundation

[…] Nook, and Kobo.  Choice of the Petal Throne has also been doing very well – there is a very positive review of the game by James Maliszewski on the Black Gate website.  Many people over the years have asked for an introduction to the […]