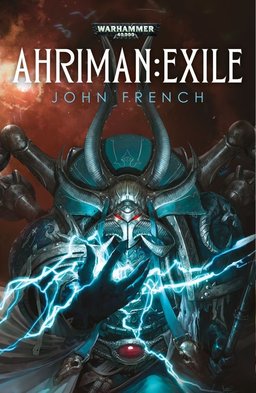 I’ve been listening to Horus Heresy audiobooks during my daily commute recently. They’re a heck of a lot of fun, and Black Library does an absolutely stellar job with them — not just by choosing top-notch readers (which they do), but also with excellent music and sound effects. They’re more like audio plays than books-on-tape… battles ring with bolter fire and explosions, and tense chases are punctuated by heavy footsteps, distant echoes, and static-laden vox transmissions. Twice I’ve almost missed the freeway exit on the way into work, and that’s usually a sign that the book I’m listening to has complete command of my attention.

One of the better audiobooks I listened to over the summer was Graham McNeill’s A Thousand Sons, read by the talented Martyn Ellis. It has a huge cast, but one of the more interesting characters was Ahzek Ahriman, the faithful Chief Librarian of the Thousand Sons Legion. Ahriman is noble and self-sacrificing almost to a fault, and the destruction of his legion at the end of that book is a great tragedy. When I finished A Thousand Sons I looked around for similar books, and I was surprised to find that Ahriman featured prominently in several other Warhammer 40K novels. I was even more surprised to find that, in almost every case — such as Atlas Infernal by Rob Sanders, or C.S. Goto’s Dawn of War trilogy — Ahriman is the villain, a relentless and feared Chaos Sorcerer. How did that happen?

John French, who has written for the Rogue Trader and Dark Heresy role playing games, sets out to answer that question with a trilogy of books that follows the history of Ahriman after the events of A Thousand Sons, and Ahriman’s exile into the Eye of Terror. The first volume, Ahriman: Exile, was released in 2013; the second, Ahriman: Sorcerer, was published this week.

A Chaos Space Marine Sorcerer seeks the power of the gods.

All is dust… Spurned by his former brothers and his father Magnus the Red, Ahriman is a wanderer, a sorcerer of Tzeentch whose actions condemned an entire Legion to an eternity of damnation. Once a vaunted servant of the Thousand Sons, he is now an outcast, a renegade who resides in the Eye of Terror. Ever scheming, he plots his return to power and the destruction of his enemies, an architect of fate and master of the warp.

Ahriman: Exile was published by Games Workshop on July 2, 2013. It is 416 pages, priced at $14 in trade paperback. There is no digital edition.

[…] in January, I wrote about how much I’ve been enjoying the delightful Horus Heresy audio books from Black Library. […]