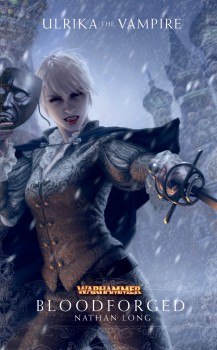 Apart from walk-ons, cameos, and bit-parts, every single character in Bloodforged is either a daemon worshiper or a vampire.  That’s really the most concise way I can summarize the novel, and your reaction to that ought to be a pretty good indication of how much you’d like Bloodforged.

Ulrika was the daughter of a family of noble warriors before her rising as a vampire, and she finds herself chafing under the restrictions that her loyalty to the Lahmian sisterhood of Nuln imposes on her.  She flees her vampiric mother and travels north, to the Kislevite city of Praag, hoping to make herself useful to humanity by aiding them in the battle against the Chaos horde besieging the city.  However, Ulrika arrives to find that, not only is the city enjoying relative peace (“peace” being a term fundamentally alien to the Warhammer world), but Praag offers her no true refuge from her undead life.  Her former companions have moved on to new horizons, and she can have no real friendship with humans.

Ulrika finds fresh meaning to her unlife only when she stumbles across a secretive Chaos cult which is kidnapping girls off the streets.  At the same time, the local branch of the Lahmian vampires offers her a choice: Either be bound to them, and returned to the same life of servitude she left in Nuln, or die by their hands.  Ulrika is forced to navigate a narrow line between Chaos sorcery and Lahmian vindictiveness.  Her only clear ally is a dashing young vamp named Stefan, who claims to be out for revenge against his master’s killer, but may be hiding a more sinister motive, even as he introduces her to love beyond the grave.

I admit I did find the first 150 to 200 pages of Bloodforged a bit slow.  They largely have to do with Ulrika travelling, self-reflecting, and meeting people who quickly pass without leaving an impression.  The cult and their nefarious plot don’t really get off the ground until over halfway through the novel.

That said, however, the latter half of the book largely makes up for that sluggish pace.  We get a creepy ascent of a tower overtaken by evil forces, a demon-possessed violin, and a roaring, baroque climax on the stage of an opera house.  The depiction of Chaos forces is quite creepy, once we get beyond generic hooded cultists with knives.

While I generally enjoyed Ulrika’s narration, I found it had to get a handle on her motivations.  Her first order of business at the novel’s opening is to abandon her Lahmian mistress in Nuln and strike off on her own.  She wants to shape her own destiny and, it seems, carve out a way of life (unlife?  Undeath?) for herself that doesn’t violate the honor code she retains from her human life.  However, Ulrika later learns of a threat against her mistress, and is immediately chomping at the bit to go back, calling her “my true mistress”.  This sudden burst of loyalty seemed to come from absolutely nowhere.

Then, too, I wasn’t clear on what “honor” means to Ulrika.  Her narration tells us that she assigns mortal importance to oaths, but the plot forces her to violate at least two or three of them.  It would actually have been very cool to see more examination of how the very nature of vampirism has warped her former idealism, possibly giving some of the characters who knew her in life more than cameos.

My reservations about the Warhammer setting continue, as indicated in the first paragraph-there are not many heroes, or even reasonably decent folk, to be found, and I wonder how the Empire survives at all, what with all the daemons, skaven, orcs, undead hordes, and whatnot that seem to roll over it.  But that’s the baseline I bring to any Black Library book, not a particular demerit of this one.

Minus the sluggish pace in the middle part of the book, it’s a well assembled adventure, with taut writing and well executed fights in a variety of settings.  It’s certainly made me interested to read more of Nathan Long’s work.  If you’re looking for traditional vampires and clashing rapiers, Bloodforged provides.