Chances are if you are at all interested in fantasy or science fiction books or games, you’ve at least brushed against Games Workshop’s ubiquitous Warhammer franchise. Warhammer comes in roughly two flavors, the fantasy version which is a Tolkien, D&D, and Moorcock mash-up, and the space opera version, called Warhammer 40,000. Taking place in the bleak world of the 41st millennium, with the tagline “In the grim darkness of the future there is only war,” Warhammer 40k is a violent world of warring factions, lost technology, dark and corrupting forces, fanaticism, and a medieval Gothic aesthetic. It is a universe where power armored soldiers charge into battle with chainsaw swords screaming religious oaths, millennia-old spaceships a mile long look more like Notre Dame Cathedral than the starship Enterprise, and daemonic forces and hostile races in the form of orks, ‘elves,’ and H.R. Geiger aliens erode the power of a moribund human civilization presided over by a nearly-dead God Emperor.

Fans of the setting — which has slipped the moorings of miniature wargaming to include a fecund book publishing arm and a series of extremely popular and acclaimed video games — will be happy at the long overdue announcement that Warhammer 40,000 will be getting its first film, an animated/CGI straight to DVD production entitled Ultramarines (turn your speakers down if you click that link). Well, it’s about time — if the rather obscure Warzone/Mutant Chronicles can get its own film, it’s rather surprising that it has taken so long for such a visible and demonstrably bankable property such as 40k to enter the film arena. 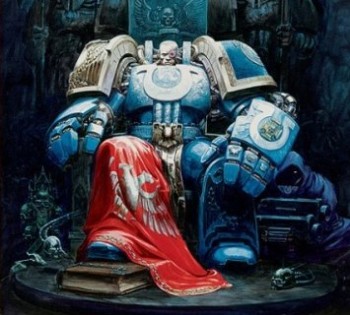 One reason I suspect that may be, is one of quality. Games Workshop is notoriously picky when it comes to extending their license to other media — a pickyness that has certainly paid off in the case of the massively successful Dawn of War RTS franchise, and the relatively new and popular MMORPG Warhammer Online. These ventures have brought 40k into the mainstream in a way that, perhaps, only Dungeons & Dragons has ever duplicated. No doubt, keeping a tight leash on quality has ensured success in this area, rather than producing a series of spiritless knockoffs which seem par for the course with this kind of licensing.

But I have to think the main reason we have not seen a Warhammer film project until now is special effects and animation technology. I believe GW once briefly pursued a live action film project, and many fans, in discussing the latest news for a 40k movie, persist in holding a live action film up as a sort of Holy Grail. I could not disagree more, as I think animation is by far the more suitable medium for this property.

The reason is aesthetics. The Warhammer ‘look’ is a distinctive one, one that goes right back to the exaggerated proportions of 28mm pewter miniatures. These proportions carry straight across the product line, from book covers to card games, video games and comic books. But, whenever you see something like a Space Marine — the most iconic and recognizable figure of the Warhammer universe — scaled up to normal human proportions, as in the case of a costume, the results are always disappointing. This is because the proportions are dramatically different. No fan, going to see a live action production of Warhammer 40k, would be able to shake the feeling that everything looked wrong.

Furthermore, my feeling is that the exaggerated, over-the-top world of Warhammer would come across as parody at best, and hokey at worst, if it was given a live action treatment. The film should have its own reality and not be tied to ours at all. Animation can do that by instantly creating a separate universe with its own rules and aesthetic.

Personally, I’m very much looking forward to the end result, as the merger of animation and CGI just seems to be getting more and more impressive lately. I have little doubt that Warhammer’s first movie will be better than the execrable Mutant Chronicles film, a project that even managed to land some decent star power but still ended up a muddy, pointless mess.
__________
BILL WARD is a genre writer, editor, and blogger wanted across the Outer Colonies for crimes against the written word. His fiction has appeared in numerous magazines and anthologies, as well as gaming supplements and websites. He is a Contributing Editor and reviewer for Black Gate Magazine, and 423rd in line for the throne of Lost Lemuria. Read more at BILL’s blog, DEEP DOWN GENRE HOUND.