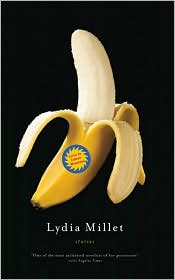 While her work sometimes hints at the fantastic, Lydia Millet isn’t strictly speaking a fantasy writer, certainly not in the sense of questing elves or weird alternate universes, and certainly not as evidenced in her new short story collection, Love in Infant Monkeys.  Yet Millet’s work  is frequently mentioned in genre venues; indeed, one of the stories collected here, “Thomas Edison and Vasil Golakov,” (in which the famed inventor of light bulbs and power generation attains metaphysical illumination by continually re-running a film of a circus elephant’s seemingly Christ-like electrocution)previously appeared in Tin House Magazine’s Fantastic Women issue. I think this might be because her depiction of human relations is satirically weird, even though in these days of reality television and talk shows, that’s pretty much standard fare. As Tom Lehrer once lamented, it’s hard to make fun of something that is already so patently absurd.

Millet, however, takes the actual absurd and elevates it to a higher level of preposterousness, in the process depicting how humans in observing, caging, exploiting or otherwise interacting with undomesticated animals illustrate how evolution may be working backwards on the so-called higher species. Specifically, she extrapolates real-life occurrences between animals and real celebrities and  other well-known historical figures to illustrate human instincts for cruelty, self-centerness or just plain indifference, both to other  species as well as their own.

The opening story, “Sexing the Pheasant,” concerns Madonna who for some reason or another is hunting the bird. Her obliviousness not only to the suffering of a pheasant she has shot, but to her husband, except as it relates to her own narcissism and megalomania, sets the collection’s thematic tone The title tale (which also inspired the cover illustration, a peeled banana with a sticker on it is reminiscent of Andy Warhol’s iconic  The Velvet Underground with Nico album artwork, though I can’t see any connection between the stories and the band) concerns psychologist Harry Harlow and his experiments with rhesus monkeys to prove the importance of maternal care for social development. Harlow had more than his share of personal problems; Millet depicts how his insensitivity to the monkeys he experimented upon in the name of science reflected his insensitivity to his own species, suggesting perhaps that maybe there is some justice in the world, if not in this one, perhaps in the next.

My favorite story here is “Chomsky, Rodents,” in which the narrator encounters the famed structural linguist and left-wing radical at the village recycling center. Chomsky is having a little difficulty parting with a gerbil house, admiring its structural integrity (remember, he’s a structural linguist), trying to make sure that the right person who can appreciate the manmade mimicry of a natural domain will take advantage of its functionality. In the periphery of this  obsession with better living for rodents, a minor human drama unfolds in which Chomsky’s role is gradually detailed. Again, the lack of  empathy, deserved or not, among cerebral creatures is artfully and humorously exposed, with the moral that even the bonds of family, no matter how fundamental once broken, can’t be fixed.

If you remember the ridicule President Jimmy Carter endured when he supposedly fought off a “killer rabbit” (and subsequently was unable to fend off Ronald Reagan), you’ll probably appreciate “Jimmy Carter’s Rabbit.” The narrator is a psychologist and, like his colleague Harlow, ironically lacks empathy for anyone but himself. When the former president and born-gain Christian makes an appointment with the psychologist ostensibly to atone for a childhood incident for which Carter feels responsible, the shrink goes into denial and thinks the “real” topic of consideration is Carter’s feelings of impotence resulting from the silliness of the killer rabbit tale. Instead, the feelings of impotence are those of the psychologist who, you’d think, might be a little more self-aware. One of the funnier, in a poignant kind of way, stories.

Along the same lines is “The Lady and the Dragon.” You may recall the “you can’t make this kind of thing up if you wanted to” incident invoving Phil Bronstein, then Sharon Stone’s husband, whose toe was bitten off by a komodo dragon during a private tour of the Los Angeles Zoo.  What Millet makes up is an Indonesia billionaire narcissistic nitwit (do we detect a pattern here?)  who has since acquired the komodo in hopes of using it as bait to lure Stone into a marriage proposal. Sharon isn’t available, but an impersonator is. No real toes are bitten off in the expliction of this narrative: both the impersonator and the dragon remain blissfully unaware of the stupidity of people and manage to live happily ever after, regardless of other people’s intentions.

Also making appearances are George Adamson (of “Born Free” fame), David Hasslehoff’s dog walker,  and Nikola Tesla. The concluding tale is the only one that doesn’t feature a recognizable person; indeed, the characters are not named. A family is visiting the zoo. The little girl is entranced by a lame bird.   The father has to go back to work, and the daughter becomes upset because he has left. The girl loses sight of the lame bird; the zoo is closing and the mother and daughter have to leave:

There was almost no one left in the zoo, none of the day’s visitors.  But the visitors the mother did see, making their way to the turnstiles, were all walking with a slight limp, an unevenness. She wondered if they could all be injured, every single one of them debilitated — but surely this was impossible. Unless, the mother thought, the healthy ones had left long ago, and what she now saw were the stragglers who could not help but be slow.

In Millet’s stories, none of us are healthy, though the best of us, human and non-human, do our best to straggle through our lives.

[…] and radical left wing philosopher (who, by  the way, also makes a fictional appearance in Lydia Millet’s “Chomsky, Rodents”) and psychedelic mystic Terrence McKenna back in 1971 when both are taking the same flight from […]

[…] and radical left wing philosopher (who, by  the way, also makes a fictional appearance in Lydia Millet’s “Chomsky, Rodents”) and psychedelic mystic Terrence McKenna back in 1971 when both are taking the same flight from […]