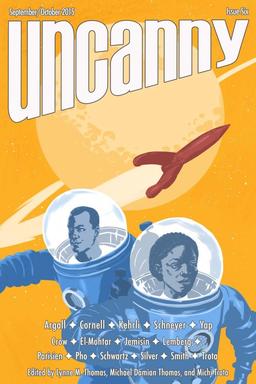 Lynn and Michael Thomas, editors of Uncanny Magazine, celebrate a year of magnificent accomplishment in their editorial for the September/October issue.

With this issue, we can check off the Uncanny Magazine Year One Kickstarter backer fulfillment as completed. We promised we would bring you six issues of stunning covers and passionate science fiction and fantasy fiction and poetry, gorgeous prose, and provocative nonfiction by writers from every conceivable background. Not to mention a fantastic podcast featuring exclusive content.

We did it. We crossed the finish line on time and on budget, and delivered everything we said we would, or made alternate arrangements due to scheduling. Thank you.

We are deeply grateful that you supported us and made this year possible. Thank you for the wonderful feedback about our first five issues. We are immensely proud of the work we’ve done. We think Uncanny Magazine Year One is the best thing we’ve ever produced. We’re so happy to have had the Space Unicorn Ranger Corps along for the journey.

So now we can rest… Or run the Uncanny Magazine Year Two Kickstarter, which is pretty much the opposite of resting. (You’ve met us, right?)

The Uncanny Magazine Year Two Kickstarter is still open for another 24+ hours, so it’s not too late to join in the excitement and help support one of the most promising new magazines this field has seen in some time. Get the details here.

All of the content became available for purchase as an eBook (PDF, EPUB, MOBI) on September 1, 2015. The free online content will be released in two stages – half on September 1, and half on October 6.

Episode 6A: Editors’ Introduction, Paul Cornell’s “Find a Way Home” (as read by Erika Ensign), Rose Lemberg’s “A Riddler at Market” (as read by Amal El–Mohtar), and an interview with Paul Cornell conducted by Deborah Stanish.

Curious about how Uncanny does such great podcasts? Lynne and Michael pull back the curtain in their recent article for us, Behind the Microphones: How the Uncanny Magazine Podcast Gets Made.