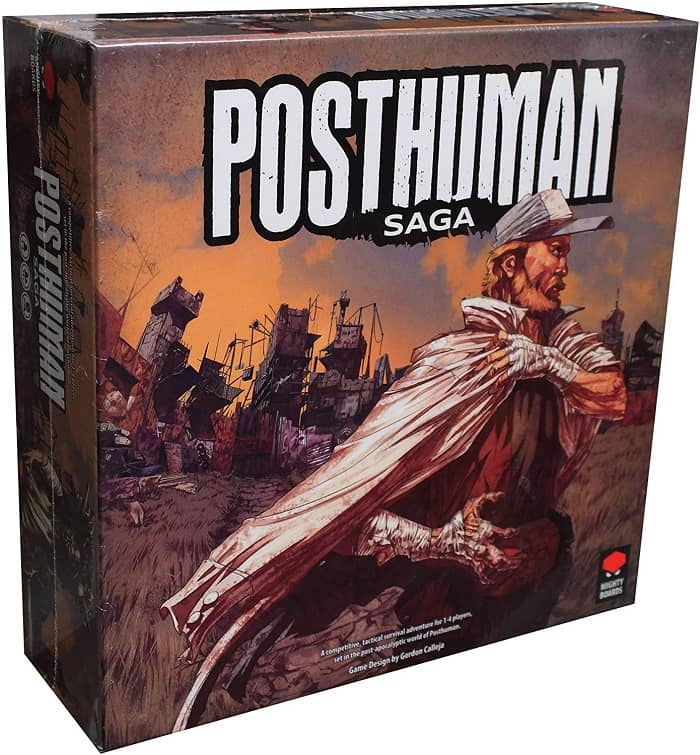 I miss walking the crowded aisles at Gen Con. In fact, these days I wonder if we’ll ever see something like the vast Exhibit Hall of Gen Con ever again. Hundreds and hundreds of vendors proudly displaying wares, and tens of thousands of eager gamers, all crammed into a vast indoor space bigger than a football stadium. And I do mean crammed — sometimes those narrow aisles were so packed you could barely move.

Just the thought of that makes my skin crawl these days. Talk about a potential pandemic superspreader event. You could take out an entire generation of gamers in 72 hours. Yiiiii.

Like all major social gatherings this year, Gen Con 2020 was canceled. But that’s okay. Truth be told, I’m still processing the hundreds of photos I took as I wandered the Hall in awe the year before. The impossibly large Gen Con Exhibit Hall is something every gamer should experience at least once, if only to get a sense of the vast scale and enormous creative energy in our hobby. It’s been fourteen months, and I’m still a little overwhelmed by the experience.

I’ve slowly been processing it all by writing about the games that most impressed me, like Alien: The Roleplaying Game, The City of Kings, Escape the Dark Castle, and Heroes of Land, Air & Sea. And now we come at last to one of the most visually impressive titles on my list, Posthuman Saga by Mighty Boards, which throws players into a beautifully designed and adventure-filled post apocalyptic world. 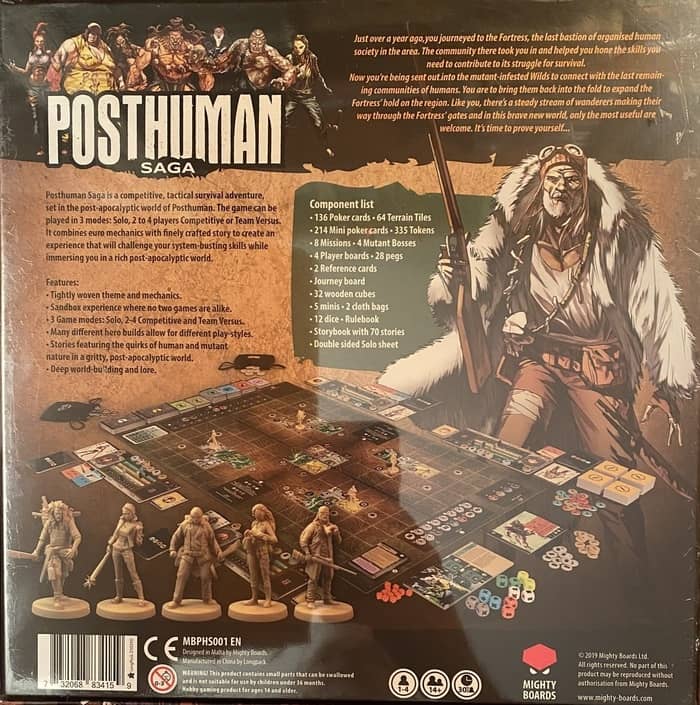 Players in Posthuman Saga have a clearly defined role — they’re agents of the last flickering embers of human civilization in a dangerous new world, and the task before them is daunting and huge. Here’s the Introductory Story (to be Read aloud to whole group before the first game) from the beautifully designed Posthuman Saga Story Book in the box.

Just over a year ago, you journeyed to the last bastion of organised human society in the area: the Fortress. The community there took you in and helped you hone the skills you need to contribute to its struggle for survival.

Now you’re a seasoned member of the Resistance – an organised military force whose leadership is based within the Fortress. They’re the last hope for an organised defence against the mutants in the region, and they need your help. You’re being sent out beyond the defensive perimeter of the Resistance’s network of outposts, into the mutant-controlled Wilds beyond. There are communities of humans surviving out there that the Fortress has lost contact with: your mission is to make the trek to get in touch with one of them, to bring them back into the fold and expand the Resistance’s hold on the region.

That’s not the only job that needs to be done. As more survivors join the fold every week, the Fortress is expanding. Big structural projects are underway, and hardware is desperately needed. So you’ve also been tasked with scouting out sites the Resistance can scavenge for parts and materials. The Fortress will send out a convoy of trucks to carry back what they need, so you should try to find closely-grouped clusters of useful stuff so as to make the journey fuel-efficient.

You’ve come a long way from being a lost survivor staggering into the safety of the Fortress’ stacked-container walls. There’s a steady stream of wanderers just like you making their way through its gates every week, and in this brave new world, only the fittest survive: if you don’t prove your worth to the community, you’re not going to be welcome indefinitely at the Fortress. It’s time to prove yourself, and give back to the Resistance.

You can download the first six pages of the full color Posthuman Saga Story Book here. 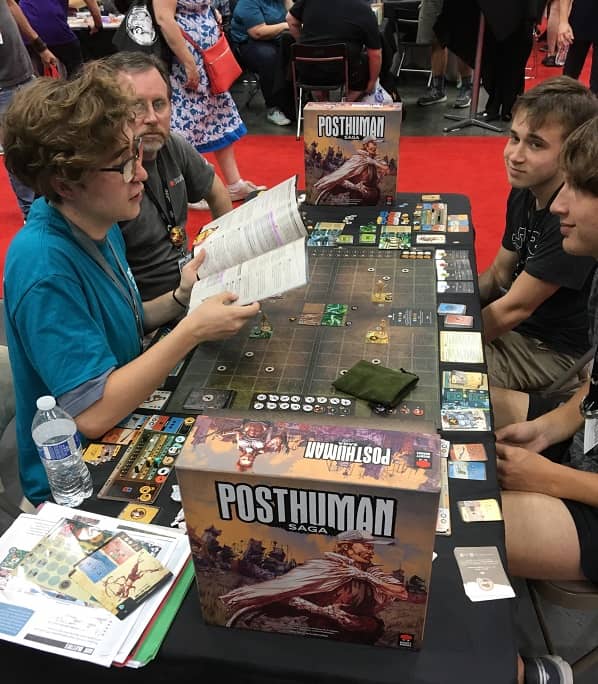 I first encountered Posthuman Saga when I stumbled on a small but enthusiastic group playing it a Gen Con. The map looked simple enough, but the story book — containing 70 compact and well written adventures — is packed with possibilities. The lucky group at Gen Con was playing a prerelease version, but the retail box was released in February, and I ordered a copy in May.

Posthuman Saga plays almost like a programmed solo adventure. Once the players kit out their characters and set out into the world, adventure is not far away. The nuggets of those encounters are contained in the story book, the mechanics of which will be immediately obvious to anyone who’s played a solo RPG. For a nice creepy example, here’s Encounter #5, Empty Nest, which begins with the players hearing the cries of children. 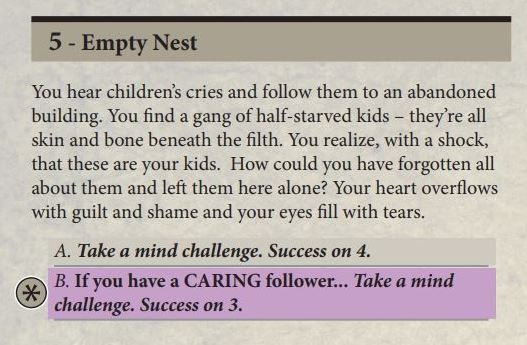 Here’s a few of the ways the adventure can play out, depending on luck and skill. 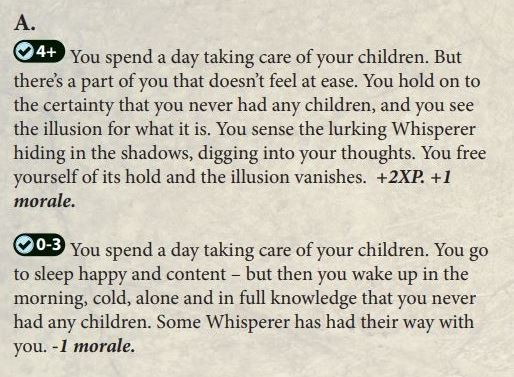 If you have a CARING follower, things can play out quite differently — something that’s true (in one way or another) for virtually all the encounters, giving them a little more replay value.

Encounters play out quickly and with (generally) clean resolutions. Your character can gain experience points, morale, new followers, boosts and gear — or suffer mutations, and worse effects. For more complete encounter examples, click on the sample pages from the Story Book below.

Played in a group, Posthuman Saga is a competitive, tactical survival adventure game. It can be played in 3 modes: Solo, 2 to 4 players Competitive or Team Versus. Including the various expansions there are now over one hundred story scenes, boasting “an emergent narrative” that hints at a wider story, but I haven’t played enough to comment on that yet.

About those expansions: There are a few now available, including:

Most of these are stretch goals from the original kickstarter, so they can be a little tricky to track down separately. Only the core game is currently available on Amazon, for example. 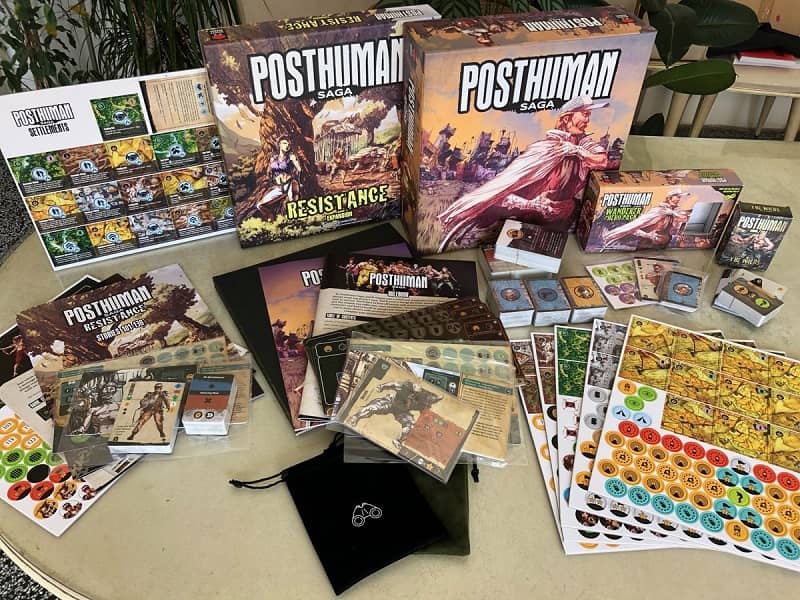 Posthuman Saga and its many expansions

Big Boss Battle calls the game “The Post Apocalyptic Board Game You’ve Been Waiting For.” Here’s an excerpt from their enthusiastic review.

Posthuman Saga is still a game in which the players explore a wasteland, forage for food, scavenge suppliers and equipment, whilst levelling up their skills by fighting increasingly challenging foes.

A number of story beats run through the structure of the game, dished out through any combination of objective cards, landmark markers, random events and specific missions, whilst a full complement of companions can also be recruited. All of this unfolds over about two hours usually, although Posthuman Saga is easily capable of lasting for more like three with a couple of inexperienced players involved.

There are also several modes to play in, including a standard competitive mode, a team versus and a solo mode — the standard mode is where I spent most of my time. In this default state, Posthuman Saga wisely veers away from player versus player combat, instead allowing each of the four players to forge their own path on a segregated quadrant of the map… It can be tempting to regard the whole experience as multiplayer solitaire at first and to a certain extent, that is undeniable. Each player lives out their own story and in doing so, the other players will occasionally just need to wait for them. It’s a mistake to think that Posthuman Saga is not a competitive game however, and because the scoring is generally quite low, every extra point for being first to achieve one objective or another counts…

I find Posthuman Saga a very interesting and enjoyable experience that is as unique as anything I could name. It’s a heady mix of combat, hand and resource management, tile placement and racing and I think it’s virtually impossible to classify alongside other games. It does have the issue of being overly long and complex for some players (especially during the first few games) but the gameplay itself isn’t that heavy once the sheer number of things going on has been understood… Because I can’t think of another game like it, I think it’s a keeper for sure. 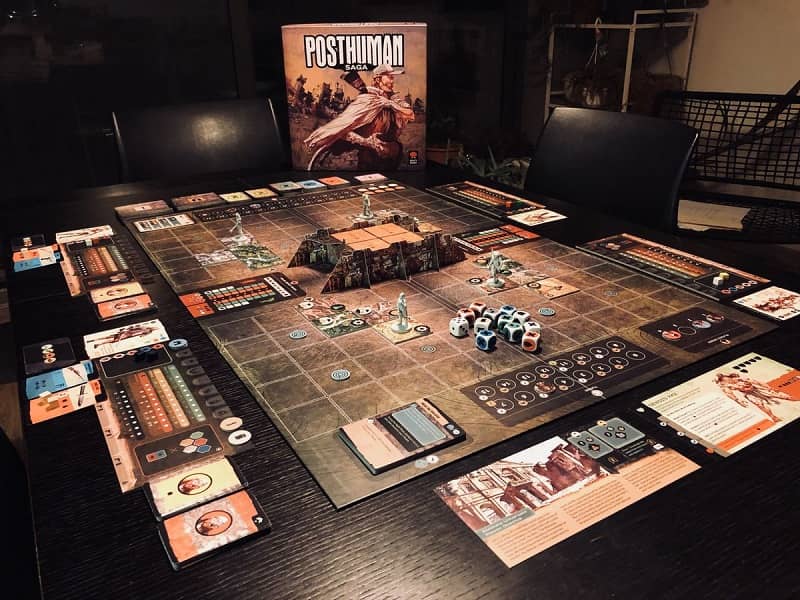 Contents of the Deluxe Edition, with a sweet little fortress model tent in the middle

Posthuman Saga was designed by Gordon Calleja and published by Mighty Boards on February 7, 2020. It retails for $60 US.