The Year’s Best Dark Fantasy & Horror: Volume One (Pyr) and The Best Horror of the Year Volume Twelve
(Night Shade Books). Both published October 20, 2020. Covers by unknown and Reiko Murakami

The pandemic has shaken up publishing schedules, including the usual batch of Year’s Best anthologies. (The 2020 edition of Rich Horton’s The Year’s Best Science Fiction & Fantasy didn’t have a publication date until last week; it now looks like it will appear Dec. 8 from Prime Books.) But as we near the end of the year we’re seeing a much more crowded release schedule — and in fact on Tuesday of this week two of the most anticipated anthologies of the year will be released on the same day: Paula Guran’s The Year’s Best Dark Fantasy & Horror: Volume One from Pyr, and The Best Horror of the Year Volume Twelve, edited by Ellen Datlow, from Night Shade Books.

All I have for now is this image of the TOC, lifted from Paula’s Facebook feed, since there does not appear to be a complete list online: 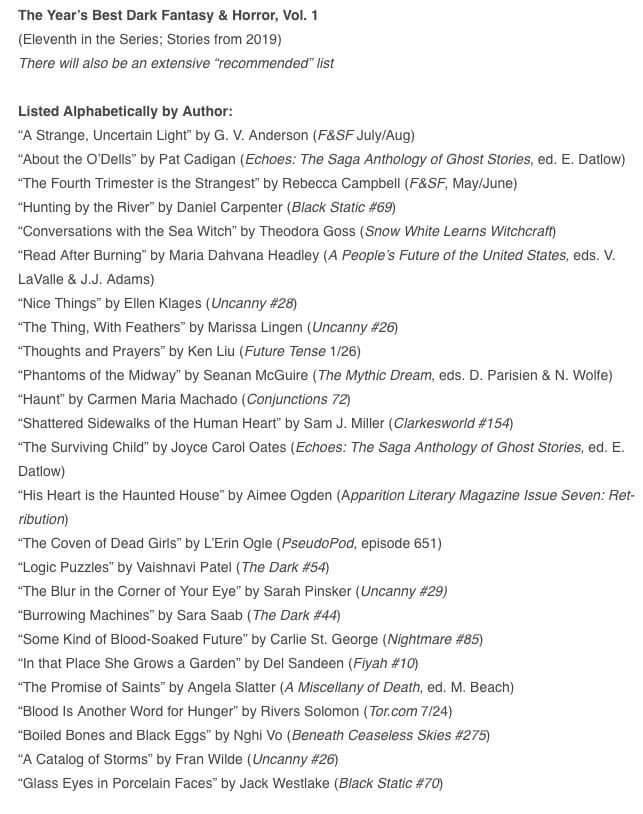 Once I can find a text version (which has the advantage of being searchable) I’ll replace the image.

Ellen Datlow’s long running series The Best Horror of the Year has been published by Night Shade Books for over a decade. Here’s the TOC for volume Twelve:

“Ice Cold Lemonade 25ȼ Haunted House Tour: 1 Per Person” by Paul Tremblay
“A Song For Wounded Mouths” by Kristi DeMeester
“Birds of Passage” by Gordon B. White
“The Puppet Motel” by Gemma Files
“The Senior Girls Bayonet Drill Team” by Joe R. Lansdale
“The Night Nurse” by Sarah Langan
“They Are Us (1964): An Oral History” by Jack Lothian
“As Dark As Hunger” by S. Qiouyi Lu
“I Say (I Say, I Say)” by Robert Shearman
“The Pain-Eater’s Daughter” by Laura Mauro
“The Hope Chest” by Sarah Read
“Nor Cease You Never Now” by Ren Warom
“Playscape” by Diana Peterfreund
“Adrenaline Junkies” by Ray Cluley
“Watching” by Tim Lees
“Mr. And Mrs. Kett” by Sam Hicks
“Below” by Simon Bestwick
“My Name is Ellie” by Sam Rebelein
“Slipper” by Catriona Ward
“How To Stay Afloat When Drowning” by Daniel Braum
“This Was Always Going to Happen” by Stephen Graham Jones
“The Butcher’s Table” by Nathan Ballingrud
Honorable Mentions
About the Authors
Acknowledgment of Copyright
About the Editor

Here’s the complete publishing details for both.

See all our recent coverage of the best in upcoming SF and Fantasy here.

These two volumes are yearly must buys for me. Ellen Datlow and Paula Guran always select interesting stories for their Year’s Best collections.

Re A. Walter’s comment: In almost every case I can think of, science fiction annuals seem to last longer than their fantasy companions.

And with regard to Neil Gaiman’s cover blurb on the first book: Paula Guran is a pillar of editing genre short fiction books. We can’t do without her. But c’mon—fair’s fair. The “grey eminence behind the world of horror” can surely only be Ellen Datlow! Sorry, Paula! Sorry, Ellen!

> I do find it interesting that Guran’s Year’s Best moved to PYR, but Prime is
> still publishing Horton’s Year’s Best series. I wonder if Prime is doing okay?

I wonder the same thing. I believe Paula’s move has been in the works for a while. Prime is essentially a one-man operation run by Sean Wallace, and he’s recently had to reduce the time he can devote to the press due to other opportunities.

My sense is the other work has been very rewarding for him, so it’s good news, but it does mean Prime has had reduced output the last few years.

> The “grey eminence behind the world of horror” can surely only be Ellen Datlow! Sorry, Paula! Sorry, Ellen!

On Facebook yesterday, Ellen pretty emphatically denied she was a “grey’ anything. I don’t think people are arguing over that title. 🙂

I’ve been in touch with Paula about this book months ago ,when it was still scheduled for Prime, and from her vague answers I had the impression that something was wrong. Thus, I’m not surprised that in the end the book is appearing with Pyr.
Looking at the TOC of her anthology it’s interesting to see that there are no stories appearing also in Ellen’s volume.
Which proves once again that “the best of” is mostly a matter of personal taste, unless a story is so outstanding to be praised by everybody.

Incidentally, I’ve just reviewed Ellen’s anthology, whereas I haven’t got a copy of the Guran book