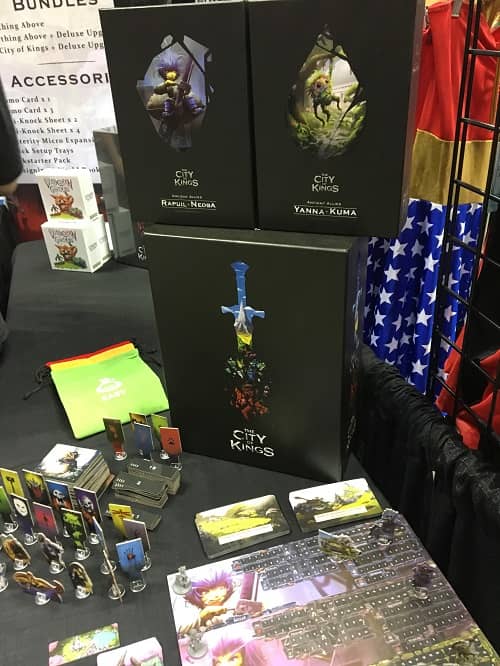 My trip to Gen Con this year was a little overwhelming, to be honest. I’d been invited as a guest to the Writer’s Symposium, and I had a fairly packed schedule of panels and presentations. But I did find the time to wander the enormous — and I do mean enormous — Exhibit Hall, jammed end to end with hundreds (maybe thousands?) of booths, all packed with vendors selling games. It was too much to take in all at once, so I learned to snap a photo or two every time I saw something interesting. I brought home plenty of treasures, but there was no way I could afford (or carry!) even a fraction of the items that caught my eye. So in the five months since I’ve returned from Indianapolis I’ve slowly been sifting through hundreds and hundreds of photos, trying to make sense of it all, and occasionally ordering a game or two that I find irresistible.

This has been a fun process of discovery, actually. Just this week, based on my photos and a small amount of internet research, I took a chance on The City of Kings, an ambitious Kickstarter-funded game designed by Frank West, and I’m enormously glad I did. The display at Gen Con was one of the more impressive sights in the hall — the massive game box comes absolutely packed with content, weighing in at nearly 8 pounds — but I didn’t get the chance to spend much more than 60 seconds in the booth. But of the hundreds of titles I saw, it was one of a handful that really stuck in my mind, and when I had a few extra dollars after Christmas I splurged on the core set.

The City of Kings is a fully cooperative fantasy adventure board game, meaning you and up to three friends must work together. You play the surviving leaders in the oldest city in the world, faced with the nearly-impossible task of overcoming the armies of Vesh over a series of seven stories and twelve scenarios. Each story offers different challenges and objectives. The game is playable with 1-4 players (yes, it has a solitaire option); story games run from 90-180 minutes, and the simpler scenarios 45-90 minutes. 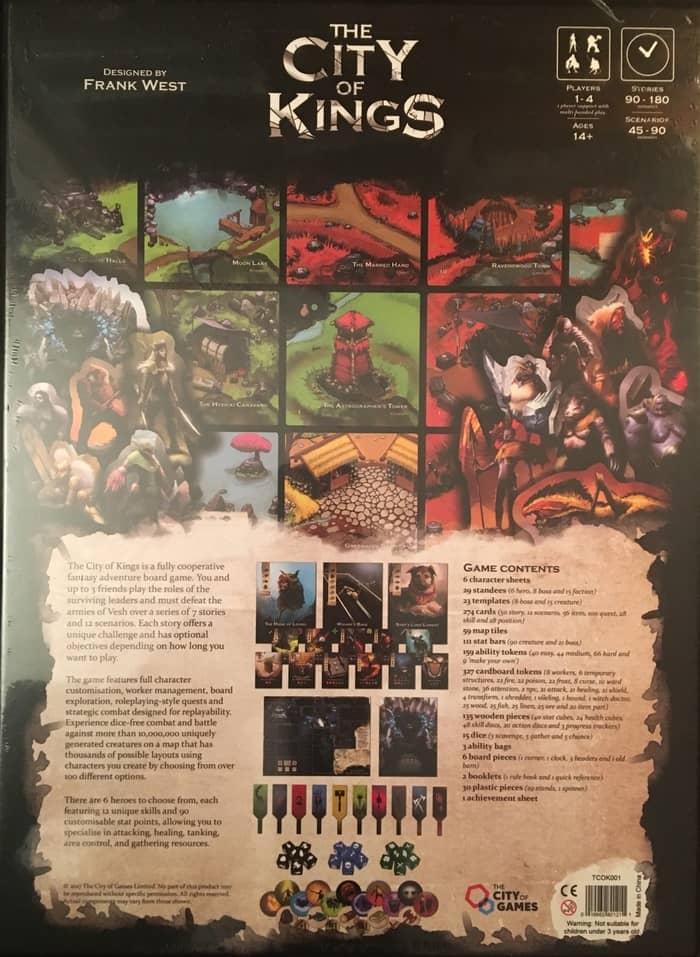 The City of Kings back cover

This world used to be a garden full of life; from the flying Vadora to the deep-dwelling Dwarves – but that was before Vesh came. The world has been lost and only one city remains; the oldest city in the world – and the last refuge for all of us. Now… we fight back.

Start by choosing one of seven stories or twelve scenarios, then select your hero, with each of the six heroes featuring twelve unique skills and nine customizable stats that allow you to specialize in attacking, healing, tanking, worker management, or whatever you desire. Aside from your hero, you need to manage your workers, who must gather resources in order to trade for new items and build structures to gain powerful bonuses.

You explore across the Ageless Realms by turning over tiles, discovering resources, side quests, hazards, building sites, traders and creatures as you continue to power up whilst preparing to enter Azure Rise.

At its heart, The City of Kings is a complex puzzle featuring endless strategic battles. Each creature is generated from a pool of spells, characteristics and stats offering over 10,000,000 unique battle situations. There are no dice, damage is persistent, it’s up to you to customize your characters and work together to come up with a strategy to defeat whoever stands in your way.

One thing I’ll say about this game up front — the board and the components look great, and it certainly makes an impression spread out on your dining room table. 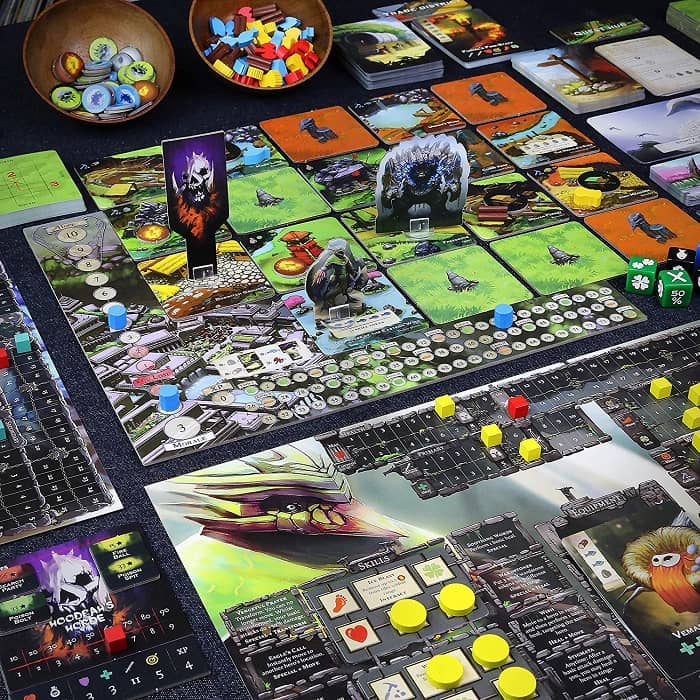 Close-up of The City of Kings board

One of the first things I stumbled on when I started my research was this rave review by Charlie Theel at Geek & Sundry, which definitely helped tip me over the edge towards a purchase.

The City of Kings is a marvel. It’s one of those passion projects put out by a one-man band – the virtuoso being Frank West… This co-operative release has a number of broad influences. It’s most commonly compared to Vlaada Chvatil’s Mage Knight: the Board Game, due both to its structure in overland adventure to complete an objective, as well as its inherent puzzle-like nature of solving mechanical challenges. This is a design where you’ll hit a wall, perhaps in the form of a marauding band of orcs you can’t quite manage, and you’ll need to look inward upon your character’s skills and abilities to assess the path forward…

While those comparisons persist the one striking quality that overshadows them all is how unique this particular blend is. You have huge character sheets with oddball fantasy depictions of a stoic rock-dude, a barbarous Elven queen, and a peculiar bird-person. You have stats like attack and move and others that you’d expect, but you also have tracks to measure the competency of your individual worker allies. These covered wagon tokens move about the tile map to farm, scavenge, and mine resources, resources that will be used to accomplish quests or story goals as well as forge powerful artifacts to boost your heroes…

The scale is compelling. These named characters are leaders of their individual groups, the workers representing the people of the solitary holdout in the face of evil – the city of kings. This integration of an efficiency, Euro-style resource mechanism supports the puzzle-y nature of play, but it also provides thematic context for the city itself and its connection to the countryside and particular adventure you’re enacting….

The scenarios themselves are effective. The flavor text and unraveling of narrative helps frame the abstractions with potency. The specific mechanical challenges of each offer a suite of unpredictable encounters. Often, you will find yourself reach a critical point in the adventure and realize you didn’t adapt the proper strategy early enough in the proceedings. Maybe you didn’t realize the third chapter would require you to gather enough lumber to destroy the ecosystem. Or maybe the boss has such a high degree of armor that your failing to buff a character’s attack sufficiently does you in. Sometimes clever play will allow you to overcome these twists. Other times you’ll fail and come back better prepared in the future. Them’s the breaks in the city of royalty.

As an entire package of gorgeous production, phenomenal components, and measured, well-tested gameplay – The City of Kings is a boss.

Check out the full review here. 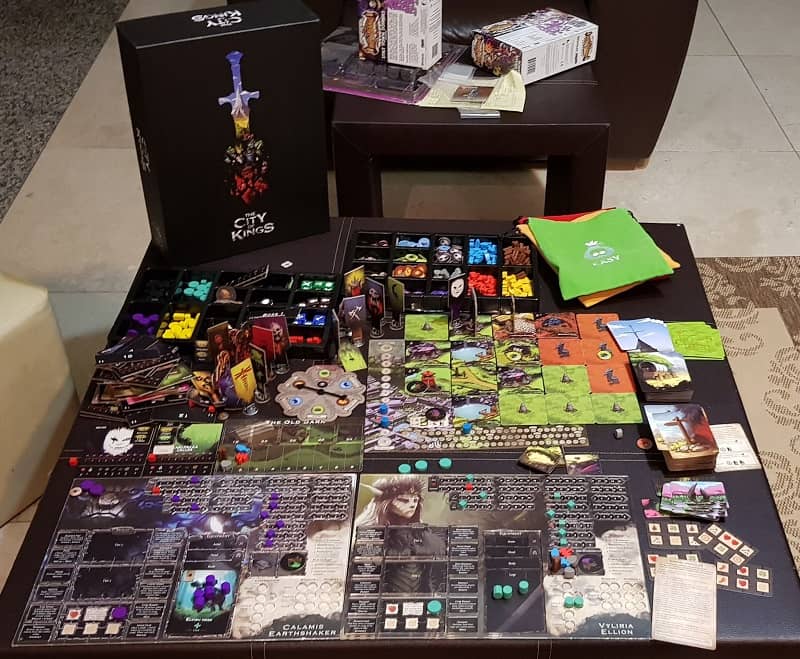 The City of Kings is not a cheap game. The Kickstarter pledge cost for the game was £59; I bought my copy on Amazon for $71.

But you certainly get a lot for your money. The reason I didn’t shell out for this game at Gen Con wasn’t the cost — I didn’t dare buy this game in the Exhibit Hall, when I was parked nearly a mile away. I would’ve needed a forklift just to get it to my car.

There are already two expansion sets for the game, both Ancient Allies packs (click on the image at the top of the page for a closer look). I haven’t purchased these and I don’t know what they’re all about but — yay for expansion packs. 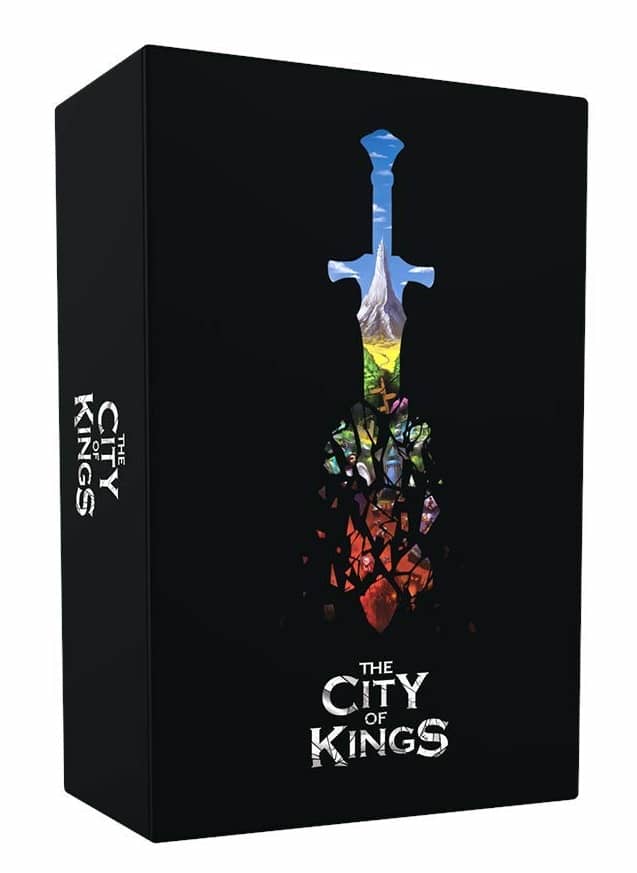 The City of Kings is an ambitious and intimidating game, but I won’t let that stop me from figuring out how to play this weekend. I don’t get the chance to indulge myself with a multiplayer game needing a 2-hour time commitment very often (and I still might not, if I can’t find the right inducements to lure my kids into playing. Wish me luck.)

But it’s one of the few games at Gen Con that seemed like it captured what I was looking for –a fantasy board game experience with genuine scope and ambition, beautiful components, and a strong narrative element. We’ll see if it plays as well as it reads.

Good Luck! (and let us know how it turned out if you manage to get your children into the game).

I may have bitten off more than I can chew this weekend… no takers among my kids yet!