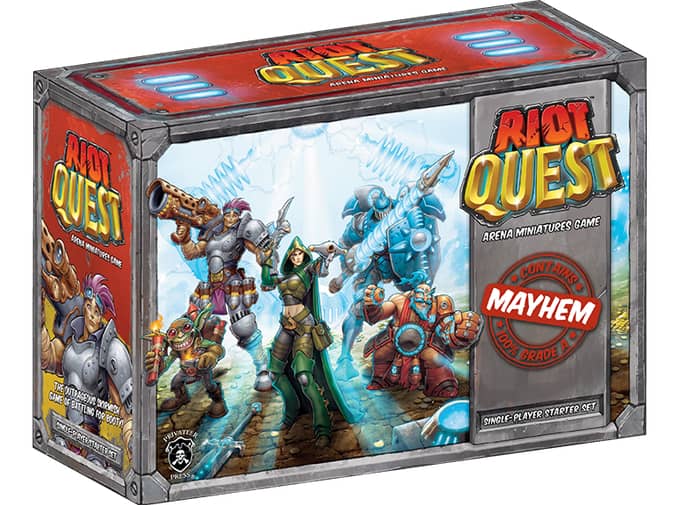 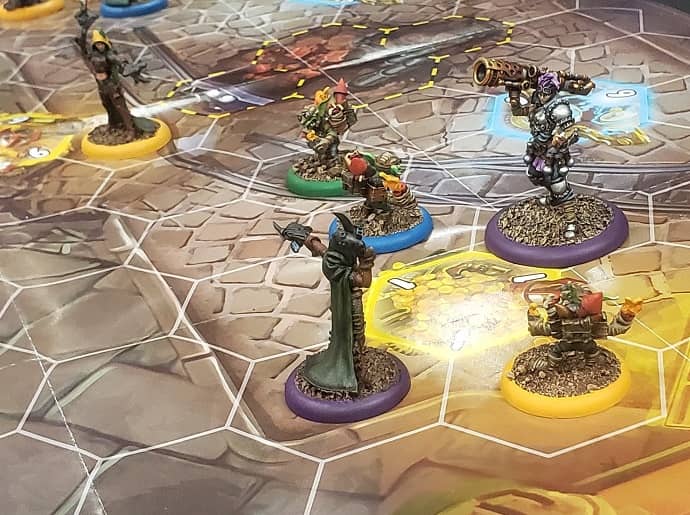 In addition to the search for loot, characters can also complete one of two Bounty cards that are in play. These special missions, when completed, are immediately replaced with new Bounty cards. The game is won by accumulating victory points from Bounty cards and destroying enemy models.

The starter box comes with the custom dice, five miniatures, a fold-up map, the assorted custom dice, tokens, and cards needed to play the game, and, of course, a rulebook. The starter contains enough for one person to play the game, so if you’re going to play with two players you’ll need to either get two starter boxes, or buy more Riot Quest expansions until you have enough models for two players (and be willing to share dice). Each Riot Quest expansion booster includes not only a model, but also that models’ character chard and another Riot Gear card.

For players of Warmachine or Hordes, these miniatures can also be used in those games as solo models within appropriate armies. Cards with the abilities of these characters can be found either within the War Room app, or via Privateer’s online card database free of charge (except for printer ink).

The initial map that comes with the starter box, but also in a neoprene fabric play mat, is the Thunderhead Fortress. While this map provides a solid game experience, the open environment doesn’t give much in the way of strategic positioning. Privateer has come out recently with a new cloth mat, the Hullgrinder, which provides much more in the way of strategic options, making for a different gaming experience. The Hullgrinder represents two crashed sea ships next to each other, connected by three planks, meaning that movement through the middle of the board is now a valued prize. Abilities like the rogue’s ability to move through other characters’ spaces. 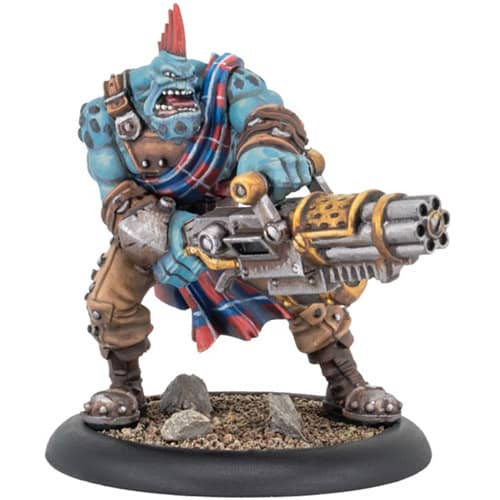 A couple of the more recent expansions include not only a new model for playing in the game, but also models that represent elements on the game board, and influence the game by providing alternative game options. The Spawn Gates Expansion with Weird Wendell not only provides the gremlin-flinging Weird Wendell, and models representing the 6 spawn gates in the game, but also a new deck of Bounty cards. The Treasure Pack with Flugwug the Filcher expansion offers models to represent the 6 treasure chests, along with a new Treasure deck and the froggy thief Flugwug.

Since the game first dropped in August, several new models have been coming available each month. This trend seems set to continue throughout the summer, leading up to the August date when they are slated to begin the Wintertime Wasteland block of releases, including a whole new starter box. More on that come August!

If you aren’t ready to dive directly into the full wargame, but want to give a look into the world of the Iron Kingdoms, the quick and fun play involved in Riot Quest is a great way to dip your toe in. The game plays great with anywhere from 2 to 4 players. And as you play, maybe you’ll find your way building a starting army for Warmachine, or the skirmish game Company of Iron.