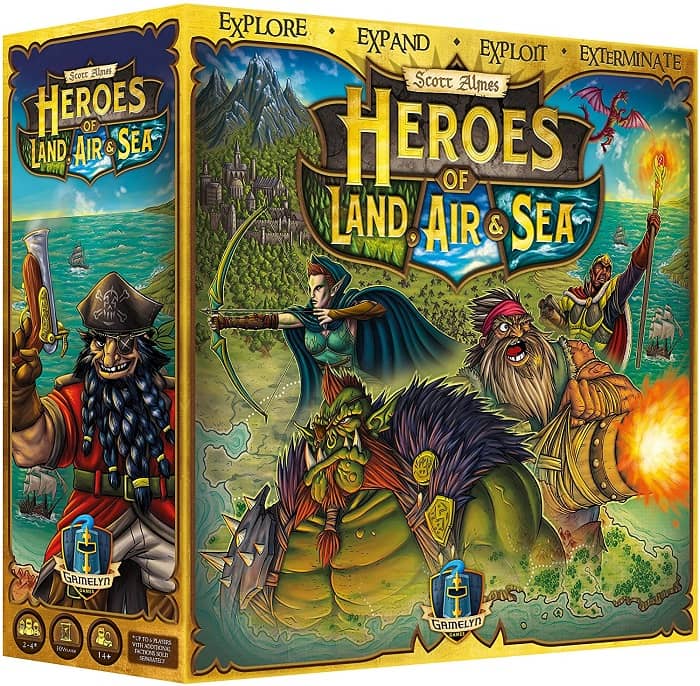 I love elegantly designed games, and games with deep replay value. When I fall in love with a board game, it’s usually because it has simple mechanics, backed up with a rich and creative setting.

But mostly, I fall for games with a cool map.

While I was walking the floor at Gen Con 2019, I wandered into a packed booth where they’d set up several sample boards for the new Heroes of Land, Air & Sea game. Competing booths nearby had open areas with loud demo games underway, but the Gamelyn Games crew instead had simply set up a few mid-game boards, then walked away to allow attendees to gawk as long as they wished.

It worked. Readers, I gawked. This is a huge and beautiful 4X game (Explore, Expand, Exploit, Exterminate), with a 3D mapboard, gorgeous terrain, dynamic miniatures, and detailed accessories. It’s precisely the kind of colorful and deliciously intriguing play surface that brings gamers from far and wide just to ask, “What the heck is THIS??” Have a look at the set up below and see what you think. 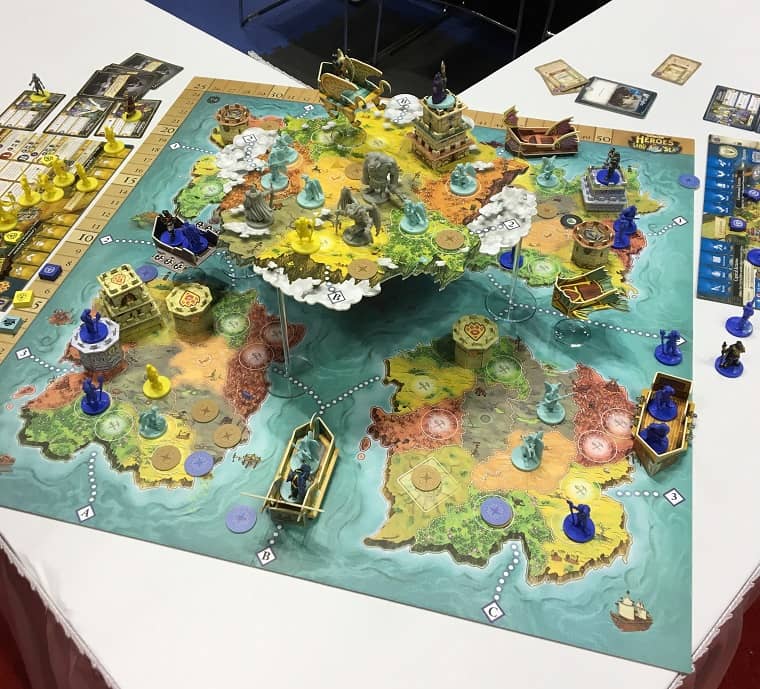 Gamelyn Games is the creator of the famous Tiny Epic line of games (Tiny Epic Kingdoms, Tiny Epic Galaxies, Tiny EpicQuest, and many, many others).

Heroes of Land, Air, & Sea is their first mega-game. It was funded — as most games are these days — with a successful 2017 Kickstarter campaign, which raised $495,035. That was enough to unlock a whole mess of expansions and stretch goals that I’m still figuring out. But it sure made an impressive tower in the middle of their booth. 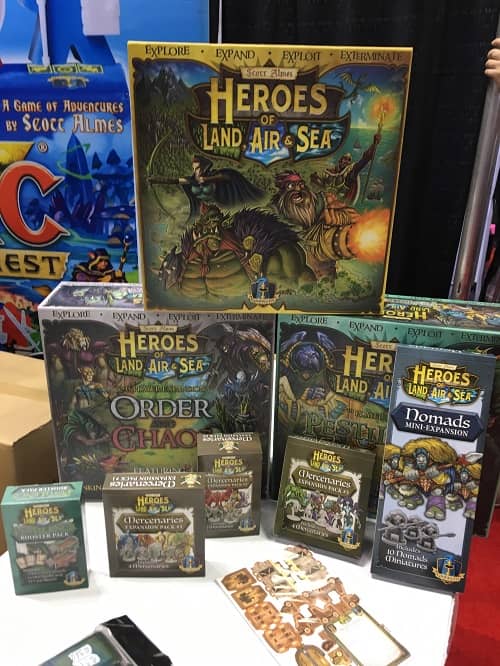 Heroes of Land, Air, & Sea and a tower of expansions and stretch goals

So that’s all cool. But what’s the game like?

I bought a copy about six months after I got home for Gen Con (no, I wasn’t going to buy it there and then lug it home… that box is huge), and I haven’t played it yet.

But I did, y’know, shake the box and listen to the entirely satisfying rattle of heavy components within. So I feel qualified to hold forth here.

Also, before I placed the order, I did do some research just to see what I was getting into. Plus I took a bunch of pictures. So I’m not an expert, but I’ll do until one shows up. 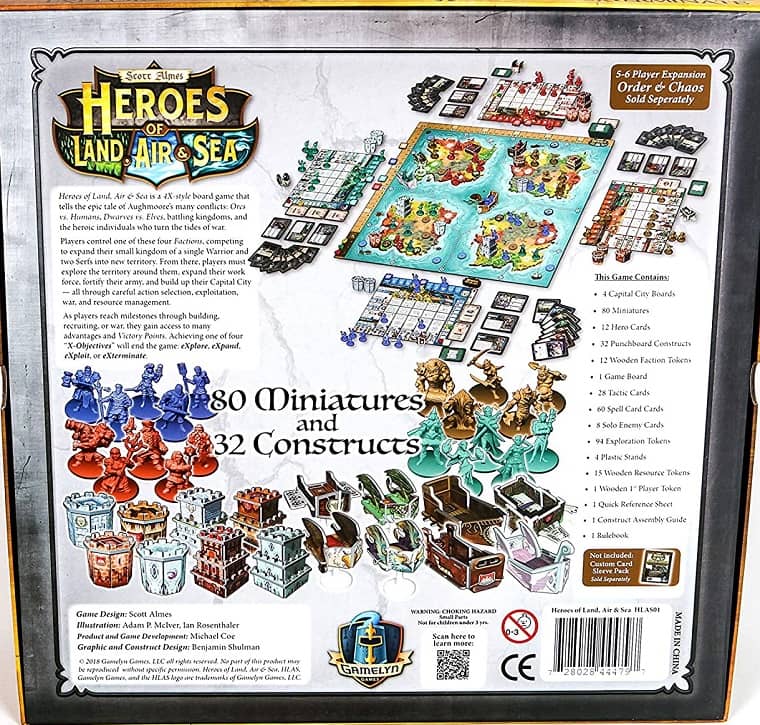 Back of the Heroes of Land, Air, & Sea box

The Dice Tower host Tom Vasel weighed in on Heroes of Land, Air, & Sea shortly after it was released, saying:

I don’t think there has been a game that has successfully pulled off that RTS aspect in a board game yet… I think this one has.

RTS, of course, stands for Real Time Strategy, a term popularized by computer games such as Command & Conquer and StarCraft. Trying to replicate the fast-action mechanic of an easy-to-play RTS in a board game is something of a Holy Grail for designers. 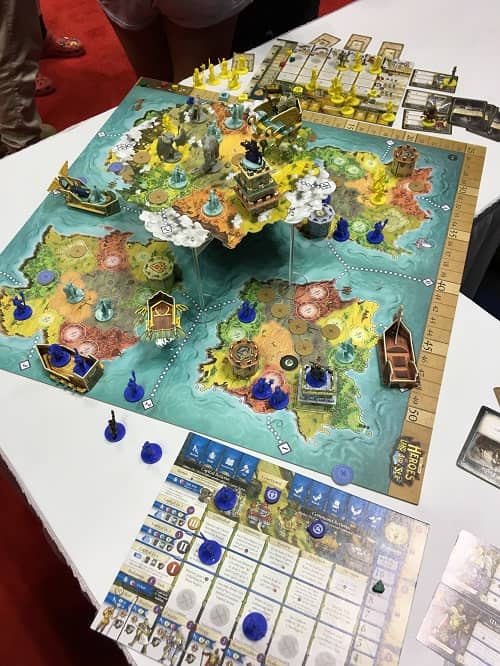 Yeah, I don’t know what that thing floating in the middle of the board is either

Unfortunately, few of the reviews commented on one of the most curious aspects of gameplay — that 3D thing in the middle of the map. I assume it comes with one of the two expansions.

I’m intrigued by the whole 3D aspect, though structurally it looks kinda flimsy. One curious cat would bring things to an end right quick. (Mind you, many games at my house have ended that way, and none of them had a 3D component, so it’s probably not a flaw unique to this game.) 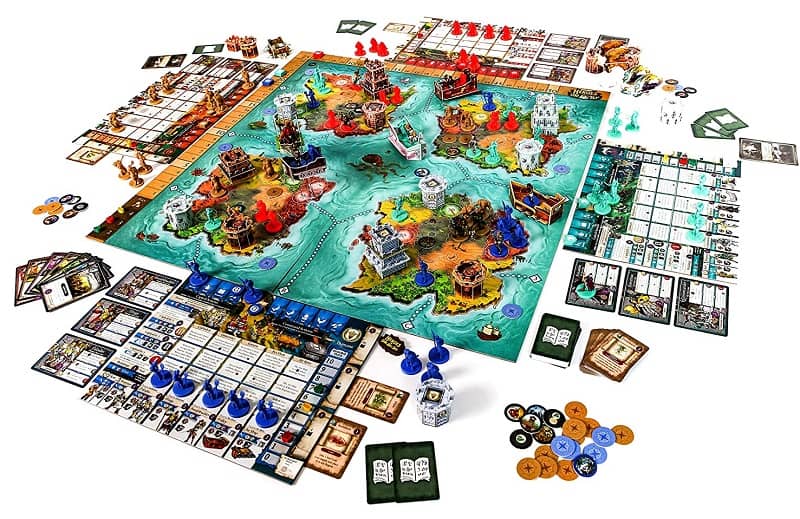 Look at those cool components! A four-player set up.

One of the better reviews I found was at The Boardgame Detective, where Jeremy had this to say.

You might have heard of Tiny Epic Kingdoms. Brought to life by Gamelyn Games, Heroes of Land, Air and Sea is essentially Regular or Large Epic Kingdoms. The game shares many similar ideas and mechanisms with its tiny sibling and is brought to us by the same publisher and designer… The game looks very cool on the table. It’s large (like, ridiculously so, maybe problematically so), colourful, and with each race having a distinct colour of mini it’s very easy to read the board state….

The combat system is very interesting. It has a scissors paper rock feel – you go in knowing what the other player has and what cards they may pick, and need to decide how best to counter those situations, but you can only pick one thing and they might not do what you expect. I find the combat in this game much more satisfying than other games that implement dice-less combat.

One of my friends described this game as ‘Twilight Imperium Express’ which honestly sums up the game really well and feels very accurate to me. It’s certainly a compliment, Heroes of Land, Air and Sea plays like an epic 4x game in a much shorter time than comparable games. It’s got a fun light-hearted setting which lends itself to great table talk. I’ve enjoyed every game I’ve played, win or lose, and I think the way the game allows for players to really surprise each other with attacks and other moves keeps it very interesting. I don’t often truly enjoy such combat focused games, but I think this game does a great job of combining that with other interesting elements to give you a great experience. Heroes of Land, Air and Sea is now sitting near the top of my list of favourite 4X games..

Ah, what do reviews matter anyway. I can’t resist a fantasy game with a gorgeous board and this many cool components. I’ll probably set it up just so I can play with the miniatures. 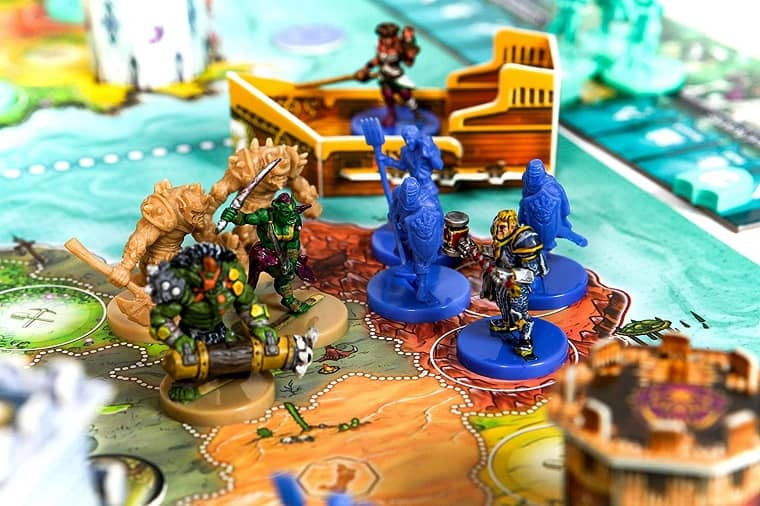 I wish I could paint miniatures like this. I can’t even paint the porch. 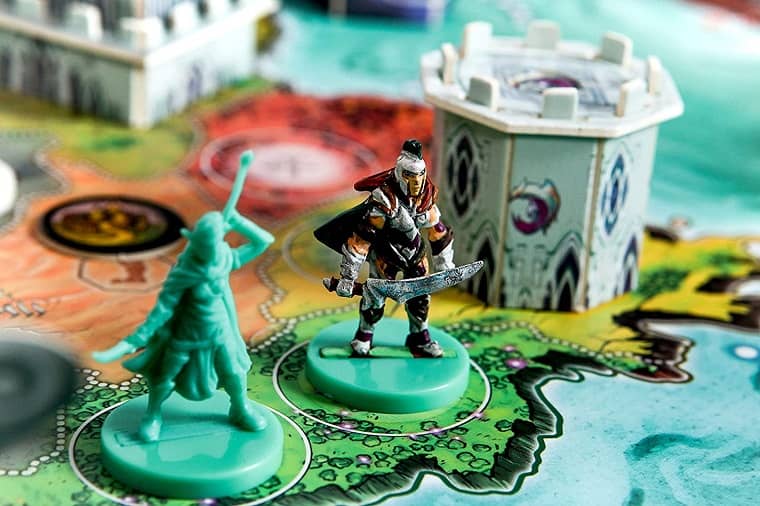 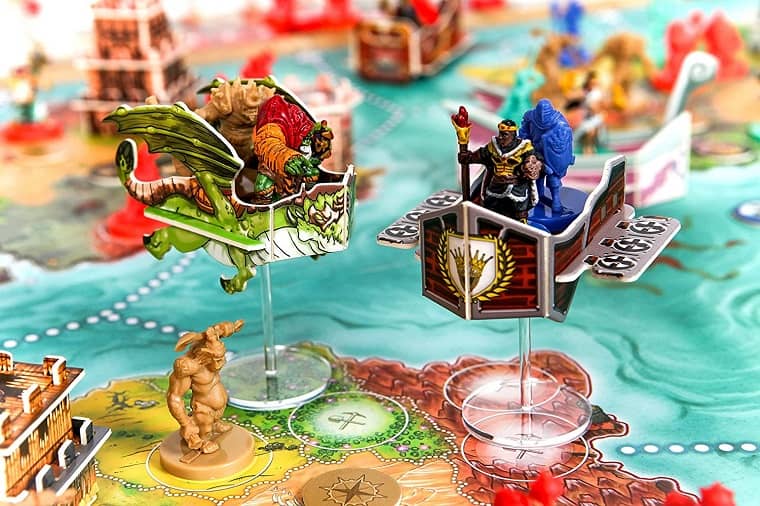 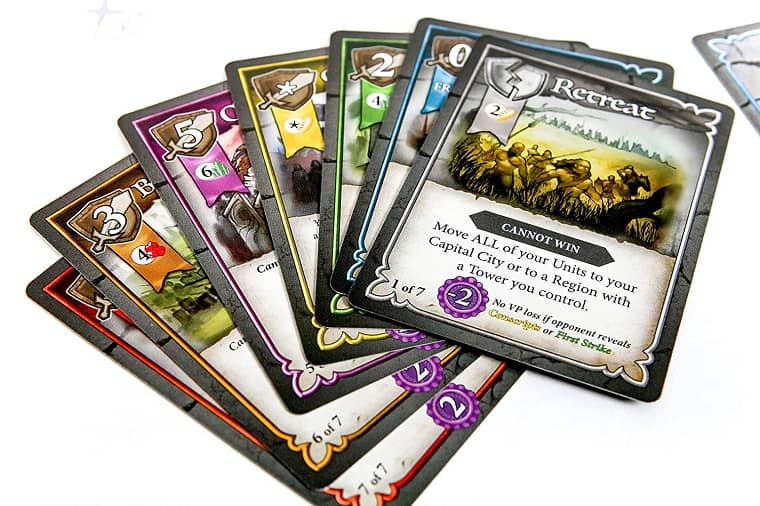 I don’t know what these cards do

Now that I’ve purchased a copy of Heroes of Land, Air, & Sea, I just need to find someplace to set it up. The  board is massive, and the only place big enough is the kitchen table, which will probably make Alice mad at me. Maybe I can try the patio…

Just in case any of you have a kitchen table the size of an aircraft carrier, Gamelyn Games has also released two big add-ons for the game: a 5-6 player expansion, Order and Chaos, which adds Lionkin, Undead, Goblins, and Lizardfolk as playable races, and one which gives an option to add a 7th player, Pestilence, which introduces Birdfolk and Merfolk. 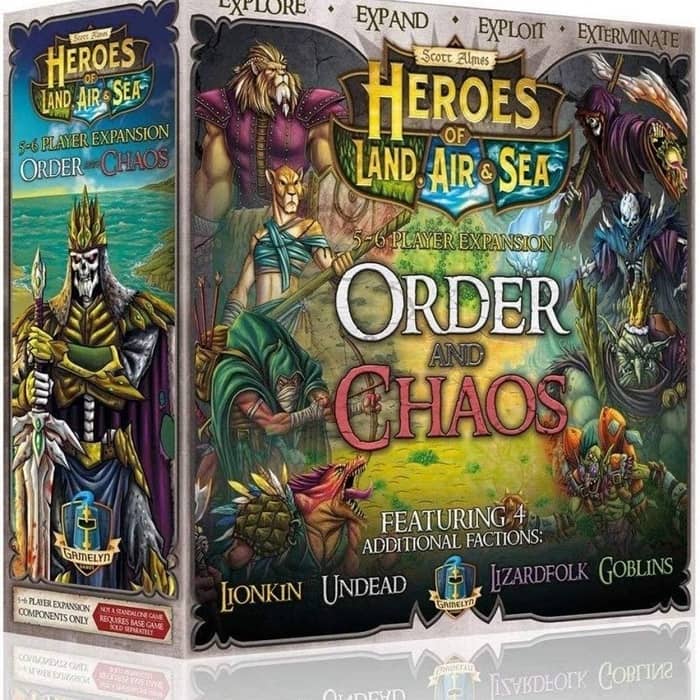 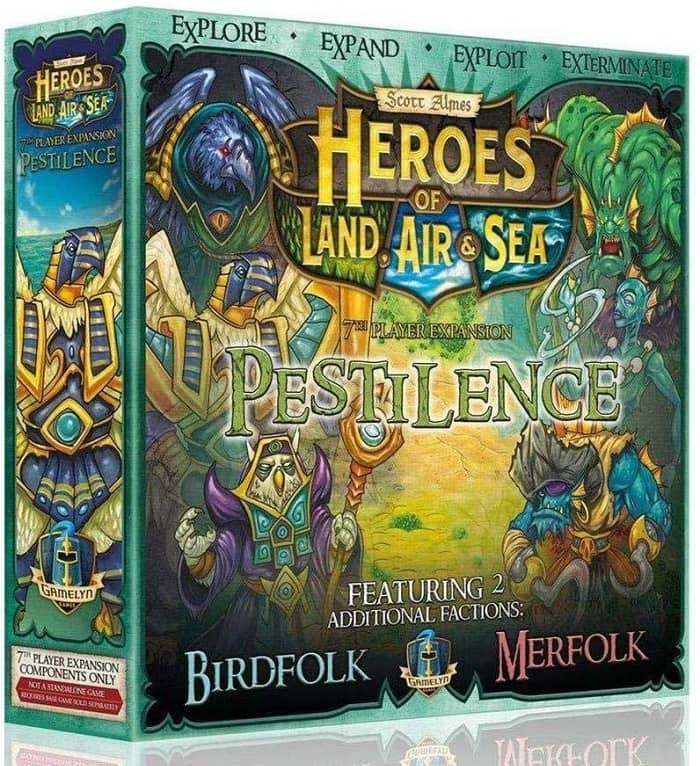 Heroes of Land, Air, & Sea was designed by Scott Almes, with art by Chad Hoverter, Adam P. McIver, Ian Rosenthaler, and Benjamin Shulman. It was published by Gamelyn Games in 2017; get more details and reviews at their website. It is available in a regular ($100) and pre-painted edition ($109.97), the latter of which includes painted miniatures. Download the rules for free here.

The floating continent comes in the Pestilence. (I’ve never played it nor shaken the box.)

It’s the shaking that really brings a level of expertise.

I suspected the floaty part was in an expansion. My finely-tuned ear didn’t detect it when I shook the base game.