The following is an an excerpt from Roy Thomas’ essay for the upcoming book from the Rogue Blades Foundation, Robert E. Howard Changed My Life.

I’ve told this story so many time by now that I figure everybody who would want to know it is tired of it already, but I can’t make up new facts just because I have to write a new article, can I? Well, maybe there’ll be a few twists in my tale this time, because I want to tell it a little bit more from the angle of Robert E. Howard (1906-1936) and Glenn Lord (1931-2011).

I had, to the best of my memory, never heard of Robert E. Howard — or of Conan or any of the other Howard characters — when the Lancer Books paperback Conan the Adventurer appeared on the racks in 1966, some months after I started working for Stan Lee at Marvel Comics. Well, truth to tell, he was mentioned in a couple of paragraphs in my fan/friend Richard A. Lupoff’s 1965 book Edgar Rice Burroughs: Master of Adventures as one of the literary heroes inspired, at least in part, by Tarzan of the Apes… but that part of Dick’s study slipped right past me, leaving no imprint on my mind. When I saw the first Conan paperback, my eyes were drawn — as they were meant to be — by Frank Frazetta’s stunningly savage cover. I bought that book as I’d been buying others of an ERB ilk, pastiches of Burroughs by Otis Adelbert Kline, Gardner Fox, Lin Carter, whomever. I didn’t always actually read those pastiches, but I kept a little collection of them on a shelf in my apartment. One day I might get around to them.

Actually, I did make a stab at reading Adventurer, very soon after I bought it. I’d seen the blurb on the back and, without checking, I believe it made some reference to ‘the sinking of Atlantis.’ Immediately, I figured I knew the genre of this book. It would be something along the lines of a pastiche of another ERB hero, John Carter of Mars — and I liked John Carter of Mars, having had a chance to read many of the original editions of the Barsoomian novels around 1950 or so because the local Jackson, Missouri, library had somehow been given an entire set of just about all the major series Burroughs ever wrote — even if they did lack a copy of his most important book ever, Tarzan of the Apes.

So I started reading “People of the Black Circle,” the first story in Adventurer. (Already I was a bit prejudiced against the book, though, seeing that it wasn’t a novel after all, but a collection of stories. Oh, well, I’d read Jungle Tales of Tarzan and survived the experience.)

But “Black Circle” quickly threw me for a loop. It wasn’t John Carterish at all — or Tarzanic, or Pellucidarian, or any of those things. It seemed like some sort of purple-prose historical novel, except with all the names of the ancient kingdoms changed to protect the guilty. Vendhya? Clearly India, so why not call it by its rightful name? The real problem, though, was that I was expecting Thark-like aliens and beasts, and this story seemed to be about some tribal chieftain who, in order to have something to trade for some of his men who’ve been tossed into a dungeon, kidnaps a snotty princess, slings her over his shoulder, and takes off with her into the night. The writing was okay, but the story wasn’t what I’d been expecting, and failed to grab me.

I put the book on my apartment shelf and probably didn’t take it down again for a couple of years… unless maybe it was to admirerthe Frazetta cover. Frazetta’s work I’d known from comic book features like “White Indian” (a.k.a. “Dan Brand”), as well as occasional well-drawn stories I’d glimpsed when paging through EC comics I never bought… and more recently from the covers of Creepy and the Ace reprints of Edgar Rice Burroughs. 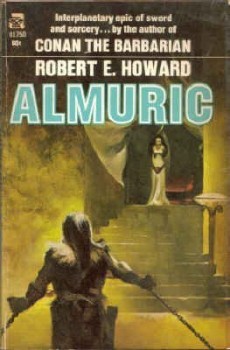 Funny thing is, though I didn’t even think about it till later, Conan the Adventurer wasn’t even the first book by Robert E. Howard that I’d bought. That ‘honor’ had belonged to the paperback printing of his somewhat John Carterish novel Almuric — another book I bought but didn’t bother to read at the time.

Over the next year or so, though, I began to understand what Robert E. Howard was up to with Conan, if only by deflected images. I purchased the other Conan (and Kull) paperbacks as they came out, again mostly for their Frazetta covers. Jim Steranko did covers for a couple of collections of that kind of story — I learned that it was called ‘sword-and-sorcery,’ and was sort of a half-assed quasi-genre. Evidently, Robert E. Howard had been the ‘father’ of that kind of thing, back in the pages of a moldering horror pulp magazine called Weird Tales, and with the ‘Burroughs revival’ and the publication of J.R.R. Tolkien’s Lord of the Rings going great guns on the newsstands, someone had had the idea to re-package the couple of dozen yarns Howard had written about Conan, run them up the flagpole, and see if anybody saluted. And it turned out that somebody did… because every few months, there was another Conan book on the stands, all the early ones with powerful Frazetta covers.

I was gonna have to actually read one of those books, one of these fine days.

Roy Thomas entered the comics field in 1965, writing and editing for Stan Lee. He is especially identified with X-Men, Avengers, Sub-Mariner, Incredible Hulk, and Daredevil. Becoming editor-in-chief from 1972-74, he co-created Wolverine, the Vision, Warlock, Luke Cage, Iron Fist, Morbius, et al. During the ’70s he acquired for Marvel the rights to Robert E. Howard’s Conan and wrote the first decade of his Marvel career (and developed Red Sonja). From 1981-86 he worked for DC on All-Star Squadron, Infinity Inc., et al., before turning to freelancing, mostly for Marvel, writing Conan again in the ’90s. Since then he has freelanced, resuscitated his fanzine Alter Ego as a professional comics-history magazine, ghost-written two decades of Lee’s Spider-Man comic strip, scribed introductions for hardcover collections, and is a prominent guest on the comics convention circuit, with his wife/collaborator Dann.

This is a delightful and slightly ironic story for me.
I read Roy Thomas’s work on the Marvel comic, Conan the Barbarian, from when I was 12 until I was 20 and he left the magazine.
For many of those years it was the only comic book I bought. His version of the Cimmerian was very much a boon companion to me throughout the troubled years of my rustbelt youth.
So it was fascinating to learn that the first Conan story he ever read was also the first one I ever read.

And it was both surprising and amusing to read about his less-than-overwhelmed reaction to The People of the Black Circle, as his response stands in stark, even humorously exaggerated, contrast to the way that story completely blew my mind.

The story of my encounter with REH and The People of the Black Circle will appear between the same covers as Roy’s, in Jason Waltz’s How Robert E. Howard Changed My Life.
There’s an excerpt from it right here on Black Gate…

Roy, I always hoped I could meet you, but if I never do— thanks.
Thanks a lot.

I noticed that difference in your reactions as well! But the ways to REH fandom are many and varied, for certain.

Just one of the reasons I’m very much looking forward to the arrival of ROBERT E. HOWARD CHANGED MY LIFE next month.