Below is an excerpt from author John C. Hocking’s essay for the upcoming book, Robert E. Howard Changed My Life, from publisher Rogue Blades Foundation.

I was a precocious reader.  By the time I was seven years old, guided by the taste of my father, I was reading Jules Verne, H.G. Wells, E.R. Burroughs, E.E. Smith, and Lester Dent’s Doc Savage stories.  Around this time my father, an art and history teacher, a martial artist and collector of swords, became a little frustrated that my mother was less than keen to accompany him to see a new, supposedly pretty hardboiled, Western movie called A Fistful of Dollars, so he took me.

In addition to thrusting upon my youthful eyes an unimagined example of cinematic style, the film presented a powerful vision of a highly qualified good and a frighteningly believable evil in stark conflict beyond anything I’d encountered before.  Every aspect of the movie resonated with me, but the depiction of fearsome, believably dangerous villains being faced down by a hero who was actually dangerous enough to confront and destroy them instantly made most of the reading, TV and movies I’d known seem somehow inadequate, even false.

Then, in the summer of 1967, my Dad brought me a copy of Lancer’s Conan the Adventurer.  The Frazetta cover promised much, but I read the first story in that collection, Robert E. Howard’s “The People of the Black Circle,” on a quiet sunny morning and it blew my little mind.

Here was all the fierce clash of qualified good and nigh unqualified evil I’d glimpsed in Sergio Leone’s film, but featuring a literally unforgettable hero…

The invader was a tall man, at once strong and supple. He was dressed like a hillman, but his dark features and blazing blue eyes did not match his garb. Chunder Shan had never seen a man like him; he was not an Easterner, but some barbarian from the West. But his aspect was as untamed and formidable as any of the hairy tribesmen who haunt the hills of Ghulistan.

Amplified by a genuinely frightening element of the supernatural…

The Master laughed down at him.

“What is that to you, dead man? Have you so quickly forgotten my strength, once lent to you, that you come armed against me, you poor fool? I think I will take your heart, Kerim Shah!”

He held out his hand as if to receive something, and the Turanian cried out sharply like a man in mortal agony. He reeled drunkenly, and then, with a splintering of bones, a rending of flesh and muscle and a snapping of mail- links, his breast burst outward with a shower of blood, and through the ghastly aperture something red and dripping shot through the air into the Master’s outstretched hand, as a bit of steel leaps to the magnet. 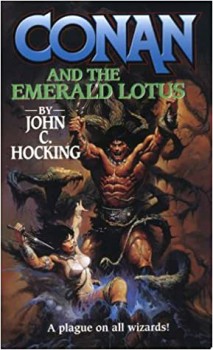 Juxtaposed against a background of almost intolerable vividness…

Utter silence reigned over the towers. Far below them the mountain slopes fell away into a purple haze of distance. The sun glittered on snow-clad peaks on either hand. High above, a vulture hung like a black dot in the cold blue of the sky. But for it, the men before the gold-bound door were the only evidence of life, tiny figures on a green jade gallery poised on the dizzy height, with that fantastic pile of stone towering above them.

And shot through with descriptions of physical combat of unparalleled ferocity…

Conan’s left arm was pinioned among the bone-crushing folds, but his right was free. Bracing his feet to keep upright, he stretched forth his hand, gripped the hilt of the long knife jutting from the serpent’s neck, and tore it free in a shower of blood. As if divining his purpose with more than bestial intelligence, the snake writhed and knotted, seeking to cast its loops about his right arm. But with the speed of light the long knife rose and fell, shearing halfway through the reptile’s giant trunk.  Before he could strike again, the great pliant loops fell from him and the monster dragged itself across the floor, gushing blood from its ghastly wounds.

While there is a good deal more to discuss about REH’s prose in general, and this story in particular, it was these specific aspects that initially seized and enthralled me.  The character of Conan, who at first is so enigmatic and fearsome that an unprepared reader might not see him as the story’s protagonist. The treatment of supernatural horror, which is not spectral but memorably physical, as brutally lethal as the blow of a battleaxe and administered by a pitiless foe of gloating cruelty.  The rich passages of description which, by virtue of their swift slashes of color and detail, manage to compliment the scenes directly driving narrative and action without slowing the tale’s breathless pace. And the jaw-dropping scenes of combat and violence, which convey a superhuman level of conflict in a fashion that feels as real as the book in your hand.

John C. Hocking lives, reads and writes in Michigan in the company of his astonishingly tolerant wife.

A marvelous intro to the Conan series.