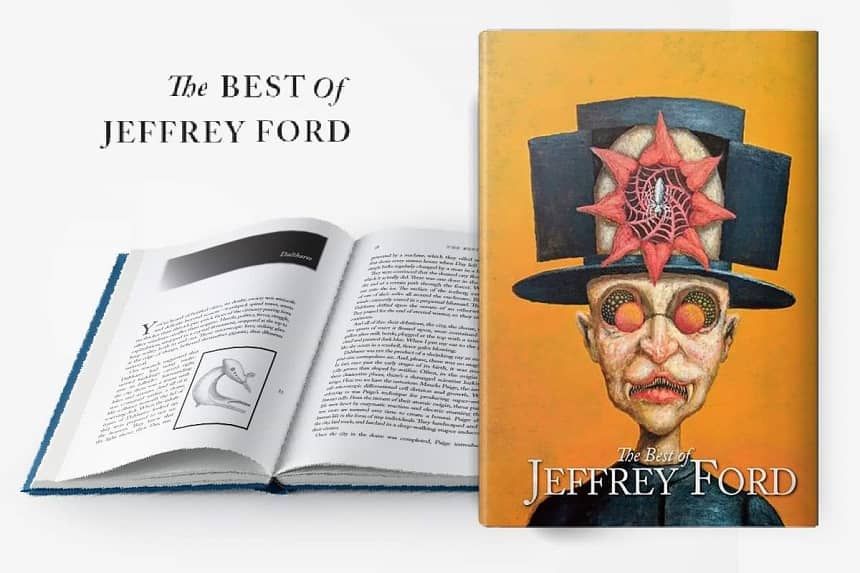 Jeffrey Ford is the author of, wow, a whole bunch of stuff. Including The Portrait of Mrs. Charbuque, The Twilight Pariah, and the upcoming Tor.com novella Out of Body. I’ve lost count of how many times he’s won the World Fantasy Award — for the novels The Physiognomy (1998) and The Shadow Year (2009), the collections The Fantasy Writer’s Assistant (2003) and The Drowned Life (2009), and a few others I’m sure I’ve lost track of. His short fiction has won the Nebula Award, the World Fantasy, and — for his brilliant tale “Exo-Skeleton Town,” originally published the very first issue of Black Gate magazine — the Grand Prix de l’Imaginaire.

Jeff’s has written over 130 short stories, gathered in half a dozen fine collections over the past two decades, but he’s never has a Best of. At least he didn’t, until PS Publishing produced the gorgeous artifact you see above: a massive 554-page career retrospective containing 25 reprints selected by Jeff himself, and a brand new tale, “Mr. Sacrobatus.” It also includes author notes on each story, and original sketches and a cover by Jeff’s son Derek Ford.

Copies of this beautiful book are still available, in a limited-run hardcover, but if you want a copy, I suggest you order quickly. Here’s the book description.

These are Jeffrey Ford s personal selections spanning the decades of his career and representing his many styles genre hybrids, literary approaches to SF/F/H tropes, forays into the New Weird as one of its early practitioners, realist-auto-biographical/fantastic/ horror mash-ups, and straight-on fantasy stories. Ford is at home across the map of speculative fiction but is tied to, and claims allegiance to, no country.

If you are looking for a collection in which every story is a window on a new world, this book is for you. Within these pages, you’ll visit with the mythic jinmenkins of Japan (dogs with human heads), the great poet of Amherst, Emily Dickinson, the Beautiful Gelreesh, a monster of sympathy, a young man who suffers from a rare form of synaesthesia, Stoodtladdle, the enormous flea mayor of Exo-skeleton town, and Charon, the boatman of Hell. You will travel to strange locales a bottled city, under the bottom of the lake, the Hotel Lacrimose, and the Idiot Planet. In the words of Joyce Carol Oates: Jeffrey Ford is a beautifully disorienting writer, a poet in an unclassifiable genre his own.

This volume includes an entirely new tale ( Mr. Sacrobatus ), an eloquent note on each story, and brilliant header sketches by Derek Ford, the noted fantastic artist and son of Jeffrey Ford.

The Blameless
Word Doll, Daltharee
Creation
Daddy Long Legs of the Evening
86 Deathdick Road
The Beautiful Gelreesh
Under the Bottom of the Lake
The Honeyed Knot
Exo-Skeleton Town
The Angel Seems
The Night Whiskey
The Seventh Expression of the Robot General
Blood Drive
The Dismantled Invention of Fate
Bright Morning
At Reparata
The Dreaming Wind
The Boatman’s Holiday
A Man of Light
A Terror
Mount Chary Galore
The Empire of Ice Cream
A Natural History of Autumn
Relic
The Annals of Eelin-Ok
Mr. Sacrobatus

The Best of Jeffrey Ford was published by PS Publishing on January 1, 2020. It is 554 pages, priced at £25 (roughly $33 US) in hardcover. The cover is by Derek Ford. See all the details at the PS website.

I’m reading this fine volume right now. It’s excellent–so many great stories. A big-ass “tome” of brilliant weirdness. I’m dipping in and out of both the Ford and Schweitzer PS “Best Of” collections as I go. PS makes gorgeous books that are serious collectors’ items.

It’s annoying how many recent PS Publishing books I want now. This, Darren Speegle, Darrell Schweitzer, R Chetwynd Hayes, Robert Shearman and most of all: Complete Rynosseros by Terry Dowling, which was necessary because some of that series was near impossible to find.

Snuggly Books, Blackcoat Press, Eibonvale Press and Tartarus Press are creating similar problems for me. Damn them and their fine work! More please.

The name sounded familiar, checking it out, that’s because I have two of their Jack Williamson books.