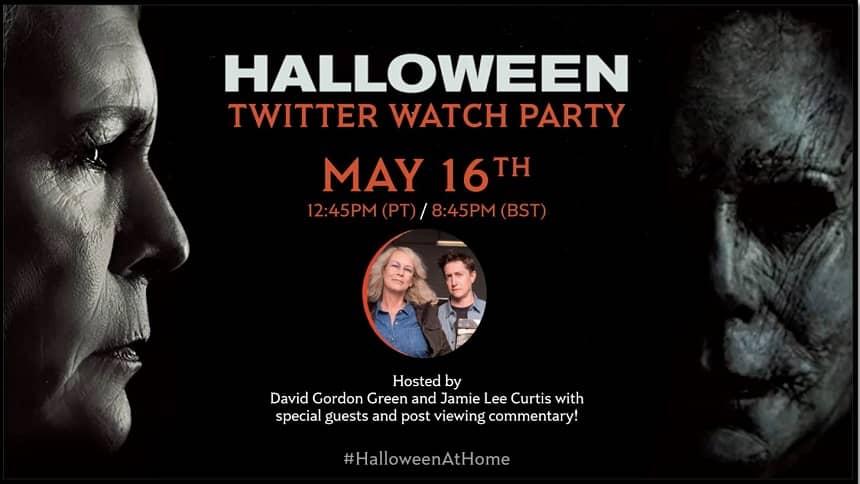 Just when we thought the boredom might overtake us, Universal Pictures comes up with the best idea with the crappiest amount of promotion behind it. When this came to my attention from another industry writer, I actually had a heck of a time finding the details on directly from Universal. Which in a way makes it all the cooler and more exclusive.

The studio has come up with a way to promote existing movies with an added twist, and this Saturday’s offering is about the best news I’ve heard since I found out I can work in sweatpants for two months. Universal Pictures Home Entertainment has announced plans to host interactive watch parties on Twitter each weekend, featuring some of their most iconic films. This Saturday (May 16), Jason Blum of Blumhouse will play host to David Gordon Green, joined by Curtis, John Carpenter, Judy Greer, James Jude Courtney and Nick Castle, to watch the 11th installment of the Halloween franchise, while providing live commentary.

No one does horror quite like Blumhouse and Michael Myers. Join the production company that specializes in horror as they watch the return of Halloween along with the cast. Lee Curtis returns to her iconic role as Laurie Strode, who comes to her final confrontation with Michael Myers, the masked figure who has haunted her since she narrowly escaped his killing spree on Halloween night four decades ago. #HalloweenAtHome

So, how does this magic happen?

David Gordon Green will be commenting using Blumhouse’s Twitter handle, and Green and Curtis will stay online after the movie, which should end around 5:45 p.m. ET, to answer questions from fans.

And when the chance presents itself, don’t forget to ask about the next installment of the franchise, Halloween Kills, tentatively expected to arrive this October 16th, pandemic allowing. In preparation, you can check out that teaser trailer below.

If horror isn’t quite your thing, don’t despair. Universal has announced their watch-party movies for the next couple of Saturdays and they may be more to your liking:

Beyond the hosts, Universal hasn’t announced any special guests who may join these viewings. But if they continue as they have, staying connected to the host’s feed will eventually reveal who else will attend. From the looks of the official site for the watch parties, Universal intends to them at least through the end of June, with the June line up still TBD.