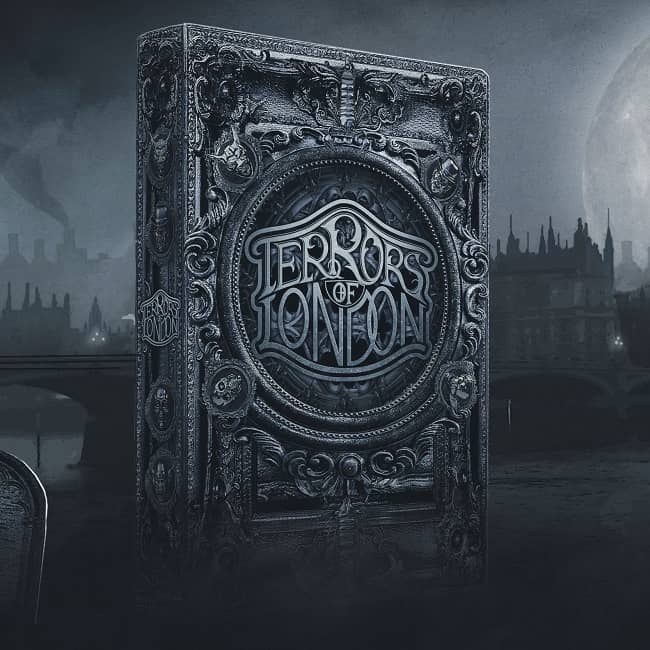 As of today, May 9, Gen Con 2020 is still on. I find it very hard to believe the nation’s situation will change enough in the next 82 days that 60,000 gamers from around the world will feel perfectly relaxed gathering in halls in Indianapolis, packed together like attendees at a rock concert. I’m fairly certain that the powers that be will face reality in the next few weeks, and postpone or cancel the event this year. And if not, I can’t imagine it will be well attended — not nearly enough for it to break even, anyway.

That’s okay, though. I’m still unpacking from last year’s con, sifting through all the great games I picked up, and sorting through the many hundreds of pics I snapped as I wandered the Exhibit Hall. If Gen Con became a once-a-decade event it would still pay off handsomely for me, as I suspect it’ll take at least ten years to track down all the fascinating games I glimpsed during my arduous three-day walk through the giant Hall.

Today I want to take a look at Terrors of London, a competitive fantasy card game from Kolossal Games with a very cool Victorian horror theme. I only got a glance at it during my marathon trek through the Hall, but it stuck out. The component art was fantastic, and the premise — players are arcane Overlords assembling hordes of monsters and undead to secretly tussle for control of the smoke-shrouded city — appealed to me immediately. The whole thing has an Underworld vibe, and I can definitely see a leather-clad Kate Beckinsale fitting right in. 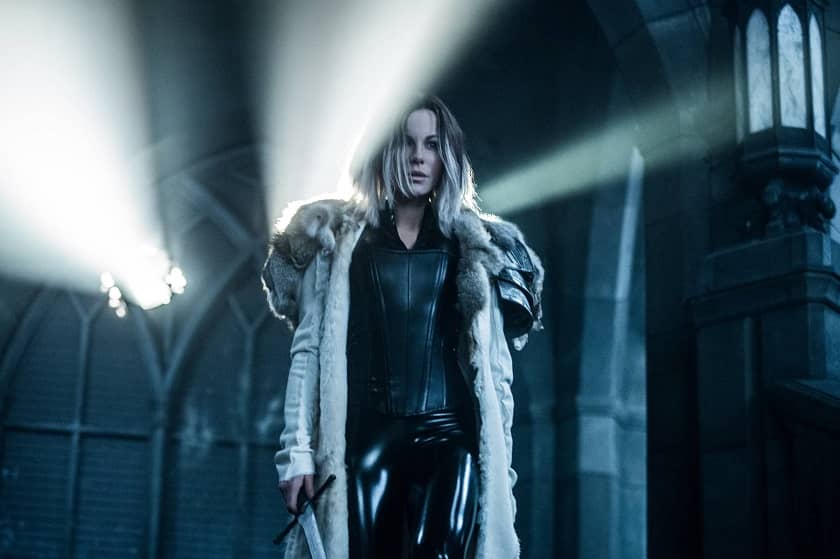 Terrors of London is what they call a competitive deck-builder game, and it plays out on simple but colorful board. Players take the role of one of four overlord factions: Undead, Beast, Mortal, and Spirit.

Each faction, of course, has a custom starting deck with powerful cards they bring to bear during the game, as they battle for supremacy over the greatest city on Earth. 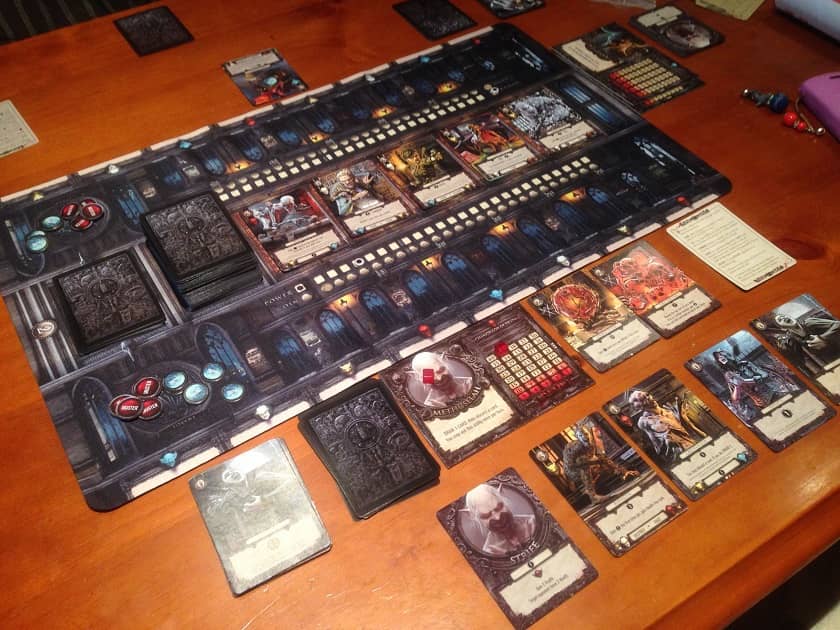 Terrors of London, with optional playmat ($20)

The game is playable by 2-4 players, and rounds are fairly short (20-40 minutes). It’s pretty quick to pick up and learn; like most deck-builder games, all the complexity comes from the cards.

In the shadows of London, terrors stir. Powerful overlords conspire against one another, amassing hordes of monsters to do their bidding. Only one will claim the night and all within it as their prize.

Terrors of London is a competitive deck-builder with a Victorian horror theme. Each player will assume the role of an Overlord, each with a unique ability and influence cards. During the game you will add monsters from any of the four different factions: Beasts, Mortals, Spirits, and Undead to your deck. Use these monsters for their abilities or combine them into powerful Hordes and unlock devastating combos! Each overlord has it’s own special strengths, strategies, and tactics to use as you gather your forces, procure marvelous relics and unleash an assault on your opponent The first player to reduce their opponent’s life to zero wins the game and claims the night.

Anyone who digs Hammer Horror films, or enjoys a good Occult Detective story, will feel a warm sense of vindication just looking at this game. We know the monsters are out there. Plotting. Wake up, man. 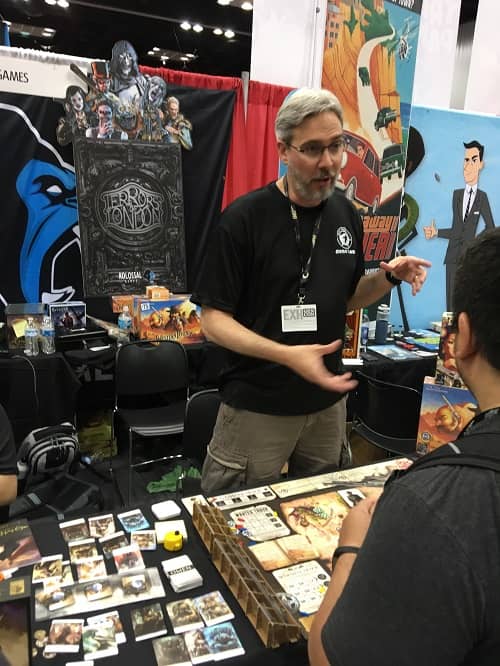 Terrors of London retails for $24.99, and at that price is a pretty good value.

The box comes packed with lots of components, including:

It all repacks nicely back into the box between games. Note the game doesn’t come with the optional playmat, available for an extra 20 bucks. 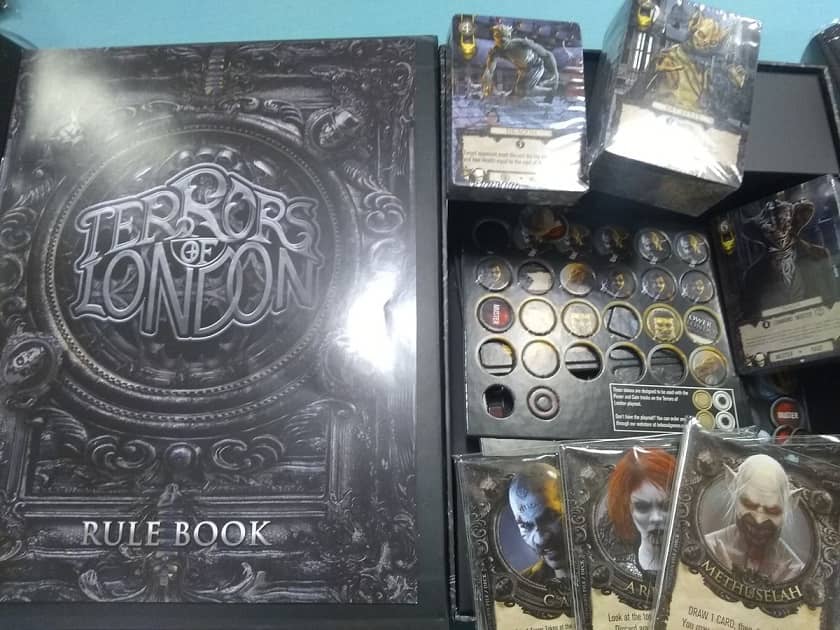 The real draw of the game is the cards, of course. And they don’t disappoint. The artwork, by Ryan Pye, is absolutely top-notch, and draws you into the midnight world of Terrors of London nicely.

Here’s a closer look at a few of the faction decks. 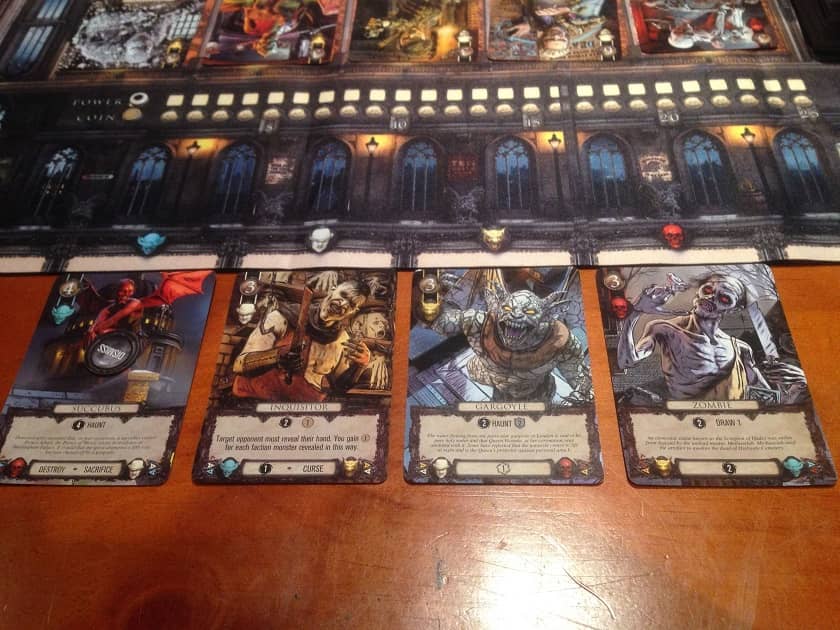 The BoardGameLife blog gave the game a solid thumbs-up in its review last year.

If you like a little Horror in your life and adore beautiful artwork, or if you like a solid deck builder which isn’t overly complex but still has a lot of cool little things going, don’t look any further. This game is going to fire up some of your senses and scare other games in its niche away. A more strategic way of play is possible, but there is a sweet sense of randomness left. which fits the setting very well.

If you don’t like darker subjects and want heroes in your stories, don’t take this path. But do know that on the dark side there can be a beauty too. If you want a highly strategic deck builder with zero luck, that’s also not the case here. This game needs you to do a little of many, and for players who want’s set strategies to explore, they may be lost in the balancing act this game needs.

The Dice Tower included it in its Top 10 Anticipated Games at GenCon 2019, and has several videos devoted to the game, including a First Impressions with Bryan and a Preview with Boardgame Corner. 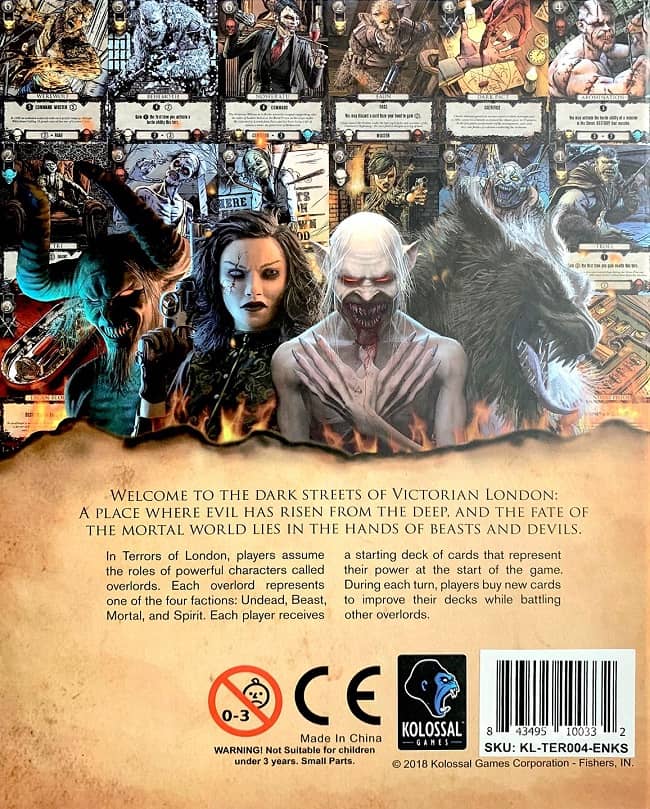 Back cover of Terrors of London

The Reptile Tomb (2019) — $10.  Dozens of new cards, including four new Overlord cards
Servants of the Black Gate (2019) — $15.  Contains all of the stretch goals unlocked during the Kickstarter campaign

Terrors of London was designed by Brad Pye, with art by Ryan Pye. It was published by Kolossal Games in 2019; it’s currently available at their website for just $20.