During confinement and adjusting to a new job (while writing a new novel!), I’ve been feeling like my bandwidth is restricted. To calm my brain at times, I’ve been rereading books I enjoyed. My reread of the X-Men is well underway (here’s post X in the blog series), and I’ve also relistened to R. Scott Bakker’s Prince of Nothing (covered here by Theo), Charles Stross’ Saturn’s Children and the first two books of The Lord of the Rings. They were all good.

I’ve had rocky experiences on rereads before though. Dune aged poorly for me in some important ways (I detailed it here) and Anthony’s Spell for Chameleon had little redeem itself in my mind (the ways that reread fell flat are here).

I was optimistic about rereading my first novel experiences, Edgar Rice Burroughs though. I’d previously talked about Burroughs and the amazing biography written about him here. Princess of Mars, Gods of Mars and Warlord of Mars were all too well remembered so I downloaded Thuvia Maid of Mars at Librivox.org, which does audio recordings of public domain books. This novel was also discussed by Black Gate blogger Ryan Harvey a few years ago, so if you want an alternate view, it’s here. 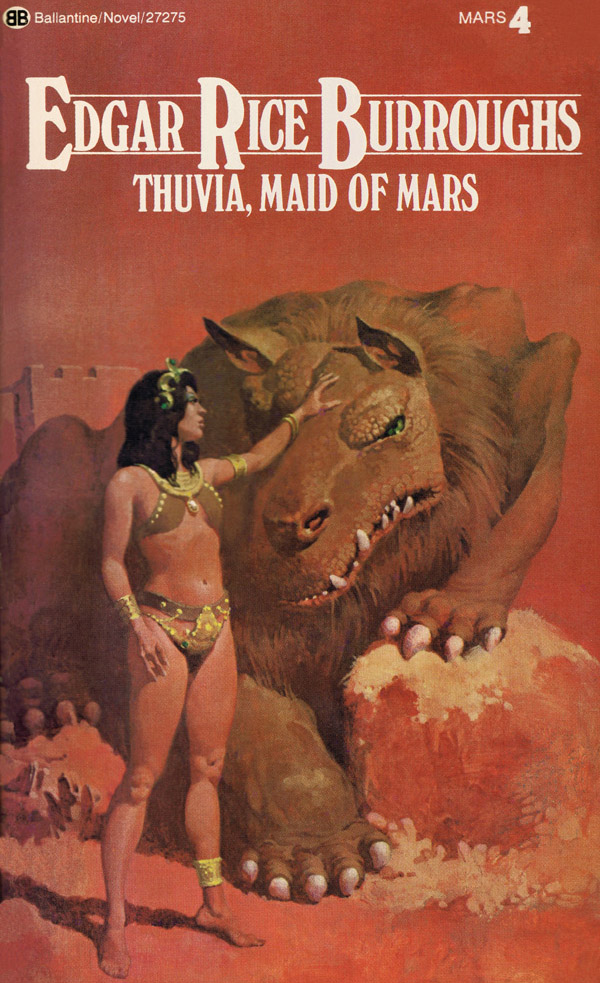 I agree with Ryan on many points. Thuvia and Carthoris and their romance is typical and effective Burroughs. The sword battles and air ships and great Martian cities, both living and dead, are so wrought as to be characters in their own right. And Lothar, the city of psychic etherealists is a gem of a creation, and possibly worth the price of admission.

Where this novel falls down for me is in the basic storytelling. I don’t know how fast Burroughs wrote it, and his biography was pretty clear that he didn’t do structural edits unless he was paid for them, but there are so many lazy choices that feel like he was just phoning them in. (Note: there were phones in 1915, right?).

The number on convenient coincidences in the story really bled away my suspension of disbelief. So did the idiot plot moments. (The idiot plot is defined as a plot that only works when some characters act like idiots.)

For example, Carthoris’ autopilot is sabotaged and his ship coincidentally flies to the very spot that the Dusarian soldiers have brought the kidnapped Thuvia. Two idiot plot moments got us here. First, Thuvia does nothing, absolutely nothing when a strange, unlit ship approaches her all-dark balcony in her palace, thus getting her kidnapped. 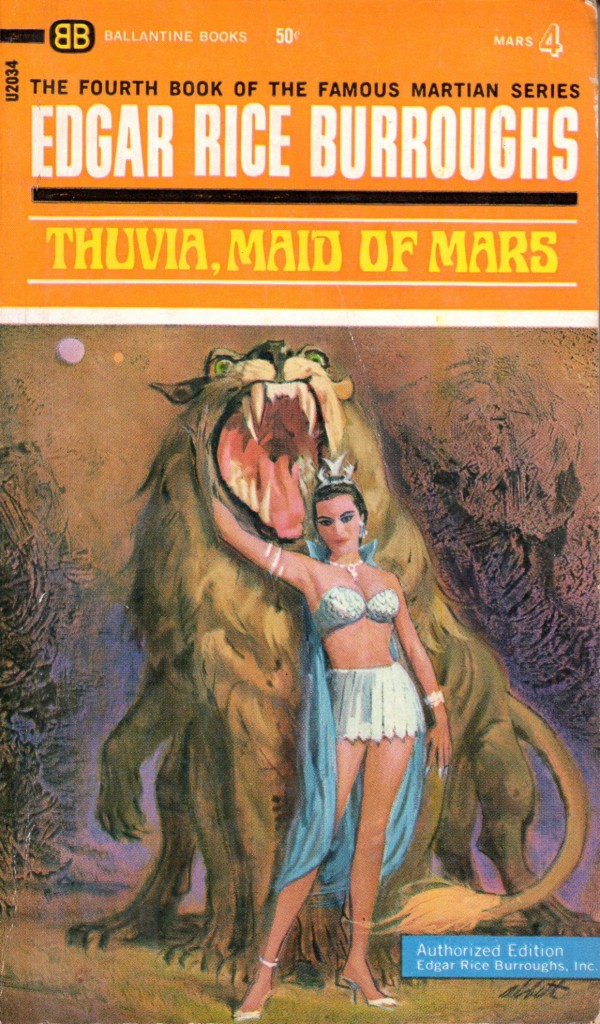 There are many creative and reader-satisfying ways that Burroughs could have gotten her kidnapped; he unfortunately chose none of them. Similarly, in the dead city, her captors leave her alone for some reason that isn’t explained, and doesn’t involve a randomly-passing Thark finding her, nor the prince of Helium stumbling upon her either.

We already knew from previous books that Thuvia had some sort of control over banths (Martian lions), but it was more than coincidental that right when they were in danger, it turned out that the danger was banths, not once, not twice, but on three separate occasions (maybe four, I was losing count of the easy outs Burroughs kept giving himself). The banths of course did give us much of the iconic cover imagery through the years, including my first encounter with Thuvia through Michael Whelan’s wrap-around, double-sized cover below. 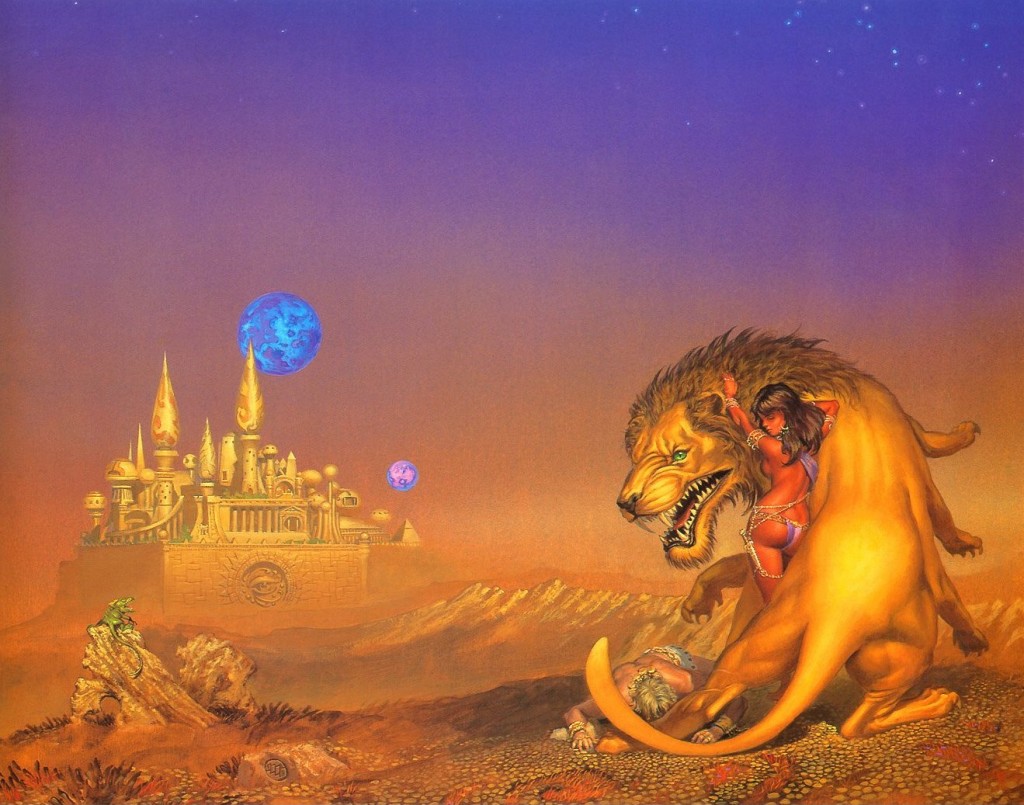 Please note that I didn’t stop listening. I had nothing better to listen to and the novel has some charm, especially Lothar and the bowman who has come to life out of illusion.

But the killer for me was at the end, when four nations were at war and Carthoris and a rescued Thuvia needed to stop it, they ran into the very person who could not only free Thuvia from her betrothal, but stop the war. He’s a Jeddak in a solitary ship, stranded and coincidentally crashed in the middle of their path, with not a single other royal ship or escort. 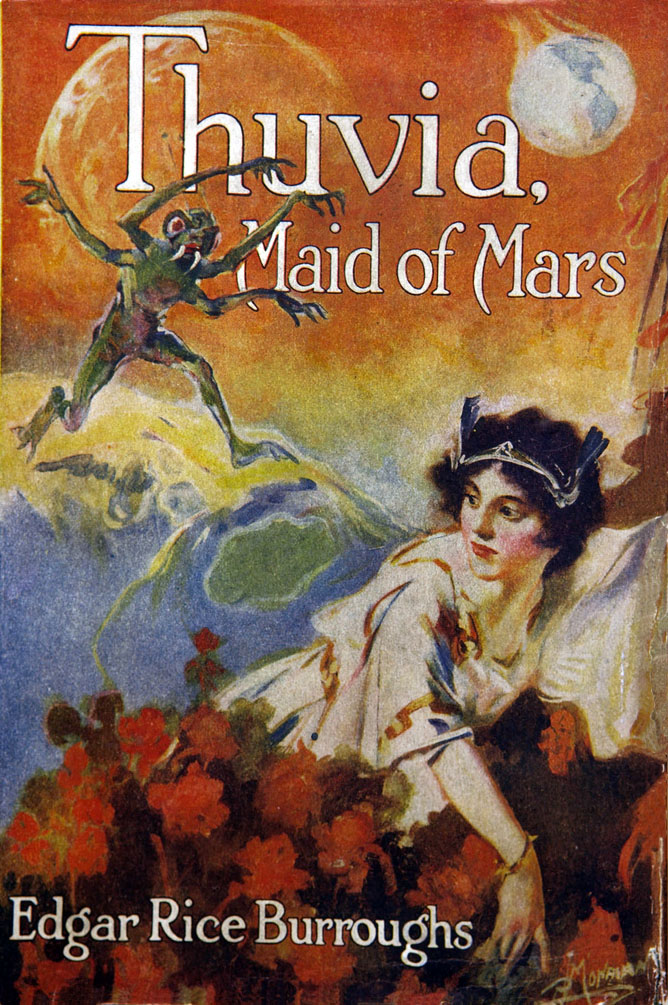 And conveniently for the word count, the Jeddak to whom Thuvia is betrothed is all chill — he just gives them what Burroughs needs to end the book. This is some of the laziest plotting I’ve ever seen and it’s maybe no wonder that I haven’t reread this since I was a teenager. But it was distracting and did help me sleep over the last couple of weeks. 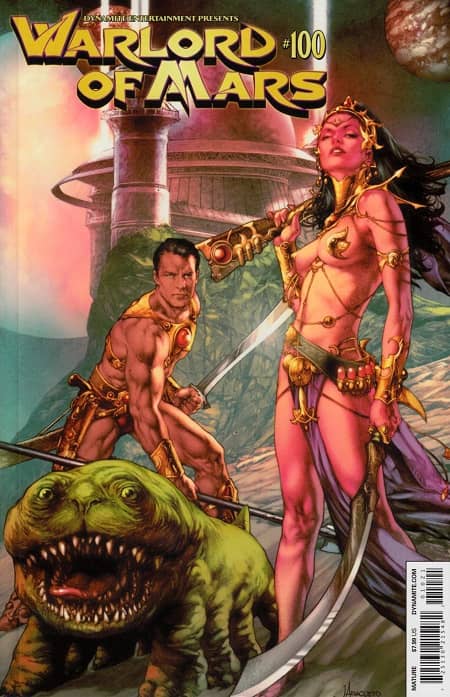 If you don’t care about any of these things, ERB books are of course everywhere. I may try Chessmen of Mars and I may not. I think I want to reread Mastermind of Mars.

Or I should just go back to comics? I did collect the complete Marvel series — it’s not on Marvel Unlimited because of expired licenses, so it would be a paper read. I remember it being great. Dynamite also did amazing work with Barsoom in 2008-2012 with amazing writing and art.

Incidentally, I did toy with the idea of calling this post “Fighting Words of Mars,” but that’s not the right book.

Derek Künsken writes science fiction in Gatineau, Québec. His first novel, The Quantum Magician, a space opera heist, was a finalist for the Locus, Aurora and Chinese Nebula awards. Its sequel, The Quantum Garden was just listed as a nominee for the Aurora Award. His third novel, The House of Styx, has just been announced jointly by Solaris Books and Analog Science Fiction and Fact who will be publishing it in hardcover and serial form, respectively.,nb   []p

It’s been a VERY long time since I read these, but I remember Chessmen as being perhaps the best of the non-John Carter Mars books.

I’ve been thinking of rereading At the Earth’s Core and Pellucidar. I don’t know whether you’ve increased or decreased my desire!

Even back in the day I remember being a bit let down by Thuvia for whatever reason. It’s the first Barsoom novel without a framing device and the first written in third-person and while it does have some good bits, for me it just never really came together as a whole.

Chessmen, I thought, was much better; ditto Master Mind and Fighting Man, although all of them have rather more reliance on coincidence than we might really prefer.

Hey Tom! I did read the Pellucidar series, but don’t remember it being one of my favourites. I love the first 3 Barsoom books, the first 4 Venus books and the first 6 Tarzan books, along with Lost Continent and Moon Maid. I think if you loved it before, nostalgia will carry it over the finish line. I did download the first Pellucidar audiobook to my phone, so I might check it out.

I think the Pellucidar series started as strong as any Burroughs wrote, but it had a sharper falling-off than the others.

If you love ERB, you should read Master of Adventure: The Worlds of Edgar Rice Burroughs by Richard Lupoff. It’s a dynamite overview of his whole body of work. Loving and critical in just the right measure.

It looks cool! I found it on Amazon.ca 🙂

Yes, Michael Whelan’s cover art has aged better than the novel I read back in high school.

I gave the Audible version of Leigh Brackett’s Skaith trilogy (Eric John Stark) a listen a re-read. It was much better than I remember from reading years ago. Maybe you check that out.

I’d like to second Mr. Parker’s recommendation of Master of Adventure by Dick Lupoff. Well worth reading.

MASTER OF ADVENTURE is a good read.