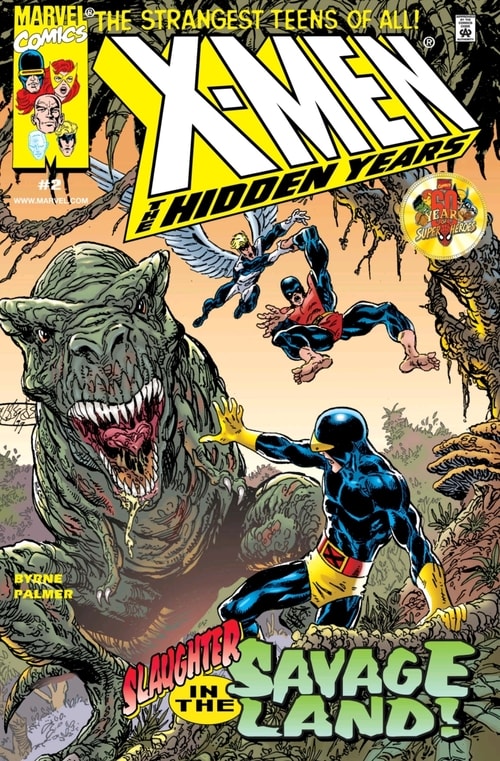 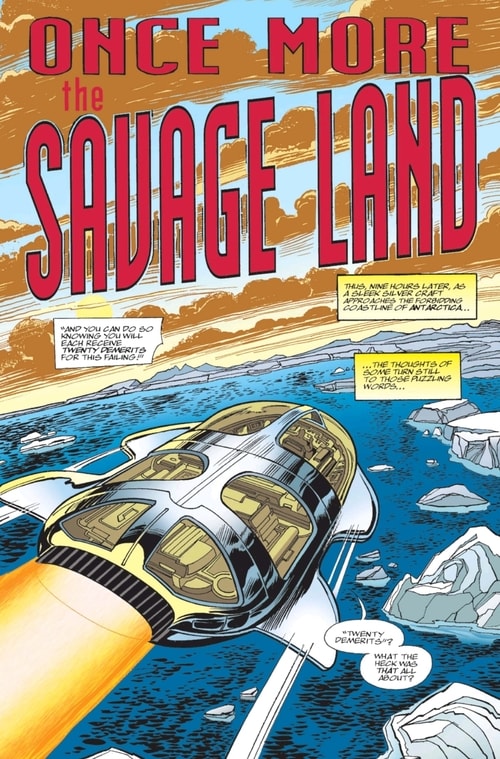 Byrne is of course famous for his enduring work on The Uncanny X-Men (issues #108-143 with only a few gaps) and the Fantastic Four and She-Hulk, as well as Man of Steel at DC. Byrne and Austin were my entry into the X-Men, so that team-up always has a place in my heart. In Hidden Years, Byrne writes and draws, and inks are by Tom Palmer, who also inked some of the end issues of the original X-Men run, so there is a continuity of feel from two eras.

The premise is that this story starts right after the Hulk issue in X-Men #66, like the Savage Hulk storyline did, but ignore that bit of overlap. The first issue is almost entirely something to catch up new fans in the year 1999 to where exactly the story had left off. It’s a good review, beautifully drawn, and gets to an important point: Professor X didn’t trust the X-Men enough to tell them of his plan to fake his death, so Bobby Drake says he’s quitting the X-Men. 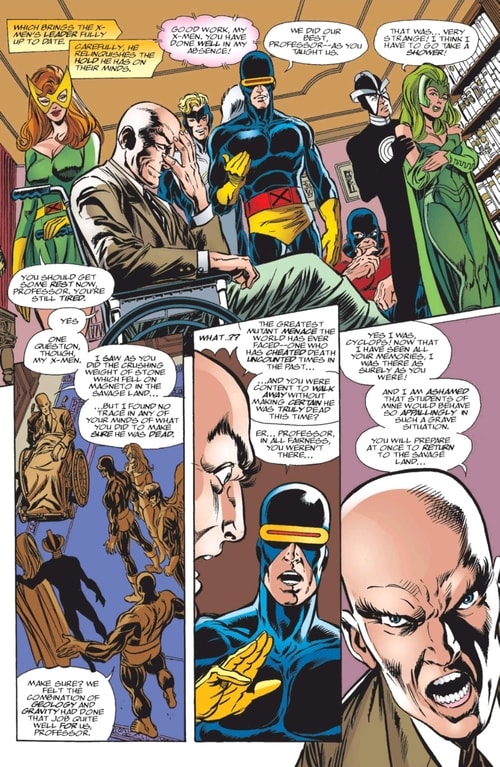 And if you like “Professor Xavier is a jerk” you’ll love him flipping out on the X-Men because the didn’t go back to find Magneto’s corpse after the battle in X-Men #63 – covered in Post VIII. This harshes their buzz, because they’ve been operating as grown-ups and saving the world without him for a bit, but off they go (minus Iceman) to the Savage Land to find a long cold corpse. 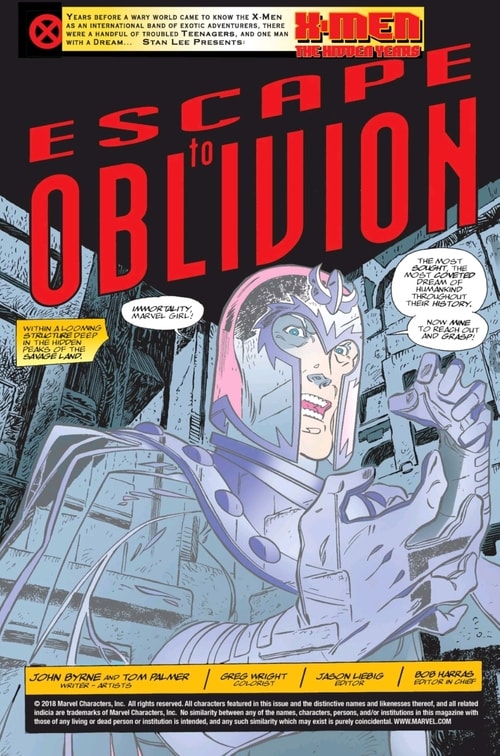 Iceman comes back to try to persuade Lorna to come with him, which is good, because the Bobby-Lorna failed romance had dropped off a cliff with the ending of the original series. It’s nice to see the love triangle with Alex Summers played out. In the Savage Land, the X-Men are ambushed and Jean is apparently dead. When Professor X telepathically calls for Alex and Lorna to go reinforce the X-Men in Antarctica, Bobby “hears” it too and goes to help out too. 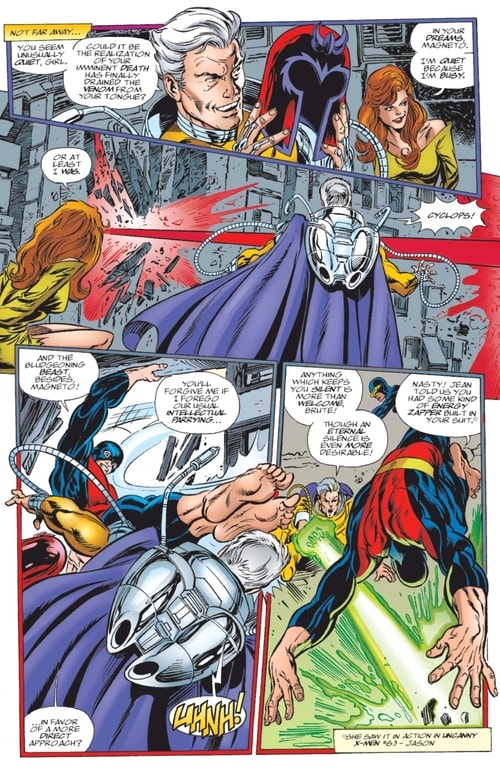 Byrne introduces us to a whole new part of the Savage Land, with weirder yet people and societies, and a ghostly Magneto. Jean is of course alive, and finds herself among some allies of Magneto. Much adventure and fighty goes on. And the X-Men then jump from one frying pan into a different fire (pyrotechnically literally in some places). 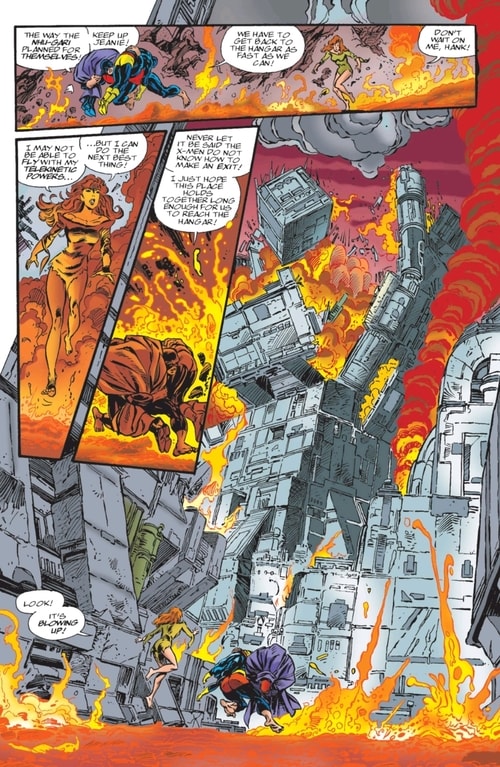 I think Hidden Years is good. I think the quality of the writing and art is good. I don’t think it’s great. Yet. I thought I should have been loving this more, and wondered if I wasn’t stressed about things because I knew that everyone would live. That’s obviously a challenge that creators have to deal with when telling stories fitting into a past, or more generally with company-owned IP, and people have overcome that before. For example, in the X-Men: First Class stories there was sophisticated, emotional storytelling which made every issue a delight. I’m not sure that the emotions landed here for me. 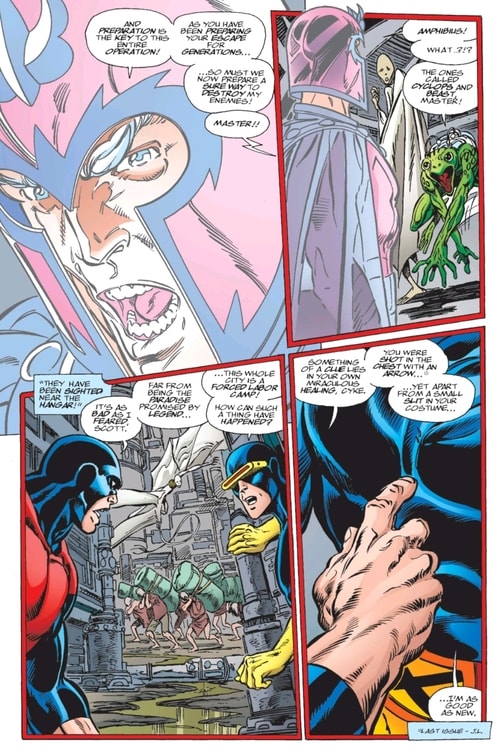 I wonder also if the stakes were a bit low. Magneto was looking for a route to immortality, and of course that’s bad, but at this point, Magneto is still weak. He’ll get a lot more powerful when he is aged back in future issues of the Defenders and Uncanny X-Men. But here he is not the all-conquering Magneto and his minions feel weak too. I wonder if that’s it. I mean, I still would give this run a B-, but it didn’t come into focus for me.

Did anyone else feel this way about the series? I know a friend of mine really disliked it. Maybe I’m not critical enough?

Derek Künsken writes science fiction in Gatineau, Québec. His first novel, The Quantum Magician, a space opera heist, was a finalist for the Locus, Aurora and Chinese Nebula awards. Its sequel, The Quantum Garden is on sale now. His third novel, The House of Styx, has just been announced jointly by Solaris Books and Analog Science Fiction and Fact who will be publishing it in hardcover and serial form, respectively.

I’m up to Uncanny X-Men #154. I figured I would circle back and read this and Classic X-Men once I get to the 90s

I had no idea that this even existed …

Hey Glenn! #154 was the first X-Men I ever bought off the spinner rack. I think it was just before Christmas of 1981 and for the previous 4 months, I think I’d only known of second-hand comics. I can’t wait to get to it. But before I get to the new X-Men, I still want to get through XMHY, a number of guest appearances (’70-’75) and also Hank McCoy’s horror run in Amazing Adventures.

Joe H.: It’s a gem of a series and easy to read digitally. I discovered it existed a little after it was cancelled and managed to get the whole series on ebay relatively inexpensively. I felt that it was a good throwback to more classic comics after the stylistic and marketing excesses of the 90s had driven me from monthly reading.