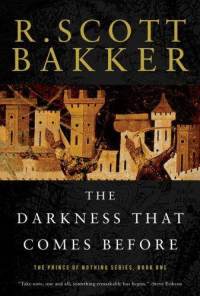 After some back-and-forth discussions pursuant to my opining on the New Nihilism of George R.R. Martin, Joe Abercrombie and others in a post entitled The Decline and Fall of the Fantasy Novel, I found myself interested in the works of my interlocutor, who happened to be the author of The Prince of Nothing series as well as a second series entitled The Aspect Emperor.

It’s too soon to write a review, as I have only finished the first book in the series, The Darkness That Comes Before. However, there are already five things that are readily apparent about Mr. Bakker’s fiction.

1. He has a gift for titles. They not only sound intriguing, but in two out of the first three cases, downright intelligent.

2. He shows an admirable attention to detail with regards to his world-building. There is a real sense of history throughout the book, aided by the fact that Bakker is profitably drawing from a historical well relatively unfamiliar to most Western readers of fantasy, that of the Byzantine empire. It’s less unfamiliar than it was, thanks to Guy Gavriel Kay and Harry Turtledove, but it has still not been strip-mined by genre authors to anywhere nearly the extent that medieval and Roman history has.

3. While Bakker is no more mercifully inclined towards the inhabitants of his fictional world than Abercrombie, he is rather less enamored of graphic bloodshed. He also appears to be much less murderously inclined towards his major characters than Martin.

4. His books offer a sense of philosophical intelligence that is lacking in other nihilist writers. Whether there is actual philosophical depth there or whether it is only a colorful veneer, I cannot yet say. But it is distinct and enjoyable either way.

5. He is offering what may be the most outrageous challenge to Munroe’s Law since Neal Stephenson’s Anathem. I am an inveterate tri-lingual committer of neologisms myself, and yet Bakker still managed to astound me with his extraordinary taste for diacritics, especially umlauts. One tends to suspect he may have been unduly influenced by the pop metal bands of the early 1980s. Consider the awesome case of the following text:

“Anasûrimbor! Now there was a name. The Anasûrimbor Dynasty had been the third and most magnificent dynasty to rule Kûniüri – the bloodline the Mandate had thought snuffed out years before, if not with the death of Celmomas II on the fields of Eleneöt, then certainly with the sack of great Trysë shortly afterward.”

Now that is indeed a fictional punch to the left frontal cortex, in response to which the English-speaking reader can but reel and mutter a heartfelt “Wöw!”

Bakker’s first book has been sitting in my To Be Read pile for a long time. His reputation for excessive cruelty to his characters has, so far, made me reach for something else every time I was about to pick it up.

I do love a well-placed diacritical mark, though. Even for folks who don’t care for them, I’m pretty sure they’re preferable to ornamental apostrophes.