Robert H. Boyer and Kenneth J. Zahorski were quite the dynamic pair in the late 70s and early 80s. They edited five anthologies between 1977-81, all but one paperback originals from Avon, and a sixth a decade later, from Academy Chicago specialty press. All are fine volumes well worth your attention today.

It may be giving them too much credit, but for me at least Boyer and Zahorski defined fantasy and its related genres for a generation. With their popular and highly readable paperback anthologies they helped new readers explore Gothic Fantasy (Dark Imaginings), Mythic Fantasy (The Phoenix Tree), and Christian Fantasy (Visions of Wonder).

And with The Fantastic Imagination volumes in particular, they drew clear boundaries around the particular sub-genre that more or less defined English fantasy until Tolkien upended things in the early 20th Century: the fairy-tale, and the High Fantasy genre that grew out of it, rich with fairies, elves, dwarves, kings, queens, and knights.

Back covers for The Fantastic Imagination

Preface by Robert H. Boyer and Kenneth J. Zahorski
Introduction by Robert H. Boyer and Kenneth J. Zahorski
“The Golden Key” by George MacDonald (Dealings with the Fairies, 1867)
“The Glass of Supreme Moments” by Barry Pain (Stories and Interludes, 1892)
“Old Pipes and the Dryad” by Frank R. Stockton (St. Nicholas Magazine, June 1885)
“The Kith of the Elf-Folk” by Lord Dunsany (The Sword of Welleran and Other Stories, 1908)
“Red-Peach-Blossom Inlet” by Kenneth Morris (1916)
“The Legend of the Christmas Rose” by Selma Lagerlöf (1910)
“Above Ker-Is” by Evangeline Walton (1978)
“The Abominable Imprecation” by Eric Linklater (God Likes Them Plain, 1935)
“Jirel Meets Magic” by C. L. Moore (Weird Tales, July 1935)
“The Thirty and One” by David H. Keller (Marvel Science Stories, November 1938)
“April in Paris” by Ursula K. Le Guin (Fantastic Stories of Imagination, September 1962)
“A Harp of Fishbones” by Joan Aiken (Miscellany 4, 1967)
“The Smith, the Weaver, and the Harper” by Lloyd Alexander (The Foundling and Other Tales of Prydain, 1973)
Excerpt from The Throme of the Erril of Sherill by Patricia A. McKillip (1973)
“Elphenor and Weasel” by Sylvia Townsend Warner (The New Yorker, December 16, 1974)
“Crusader Damosel” by Vera Chapman (1978)

Boyer and Zahorski were both English professors at St. Norbert College in De Pere, Wisconsin. They vanished after 1992, at least in terms of the publishing world. As far as I’ve been able to tell, they’re both still alive.

Here’s an excerpt from Boyer’s bio at Amazon.com.

I retired from full-time teaching in 2005, after forty-four years: four years in high school, three years in universities as a graduate teaching assistant, and the last thirty-six years teaching English at St. Norbert College in Northeastern Wisconsin… The teaching afforded opportunities for travel. I have taught in Canton, Ohio, in Milwaukee, Wisconsin, in Phoenix, Arizona, in Philadelphia, and in Northeastern, Wisconsin. I was fortunate to earn a fellowship to study at Oxford University in England, with my wife and four children along. Later on, courses that I taught, or research that I did, took me to Nicaragua (during their civil war), to El Salvador (just after their civil war), twice to Spain, and six times to the Philippines. I spent two sabbatical semesters in Spain, and I was a Visiting Professor in Manila, the Philippines, on one occasion. Friends have been referring to me of late as “an adventurer.”

The teaching and travel have resulted in the books listed on this site, the most recent of which is Sundays in Manila, the travel memoir based on my experiences in the Philippines. That country and the many friends and acquaintances I have met there keep drawing me back. I also write a monthly column for VIA TIMES Newsmagazine, a Philippine-American publication out of Chicago. You can find me, including a recent picture, on their web site (www.viatimes.com). I am currently working on an All-Ages Fantasy Novel set primarily in medieval Spain during the Arab ascendency there.

You can find Zahorski’s bio in the back of his poetry volumes, such as this one from Where Love Abides (2017).

Kenneth J. Zahorski, Professor Emeritus of English and Ombudsman at St. Norbert College, is the author or co-author of twelve books and five poetry chapbooks. His award-winning poems have appeared in numerous literary magazines and journals. A lifelong nature lover, an avid reader, an extensive traveler, and a collector of memories and sea shells, he is married, has two daughters, and three granddaughters.

We previously discussed the Gothic Fantasy anthology Dark Imaginings, edited by Robert H. Boyer and Kenneth J. Zahorski, back in 2018.

Here’s the complete publishing details for The Fantastic Imagination volumes.

Both volumes have been out of print since they originally appeared over 40 years ago. There are no digital versions. However, copies are readily available for much less than the cost of a new paperback at the usual places. I bought the unread copy of The Fantastic Imagination II I scanned above for less than $1, as part of a set of 19 paperback anthologies on eBay earlier this year.

That looks like a decent series to look out for John! the cover art, especially of Fantastic Imagination (1) and the Phoenix Tree got me wondering. I don’t see an artist attributed on ISFDB – I would guess you also tried a little sleuth work there. BUT, both covers, in my humble laymans opinion, are reminiscent of works by Barbra Remington. Specifically the similarity to the Ballentine version or ER Eddison’s Worm Oruroboros. Sadly she passed away in January this year, so one cannot ask her, but perhaps an expert out there can add some insights.

This article got me wondering on another point. Also tried some mild lookups but didn’t reveal anything. Whether Robert H Boyer is any relation to Elizabeth H Boyer, the author – who has been mentioned here in the past.

I really need to read these one of these days; and now that I’m stuck at home (instead of reading on the go, when my Kindle is so very, very convenient), this would probably be a good time.

They did at least one more book together — an essay collection called Fantasists on Fantasy.

> both covers, in my humble laymans opinion, are reminiscent of works by Barbra Remington.

Interesting theory! The composition of both covers is very similar to Remington’s classic work for the Ballantine Adult Fantasy Series, that’s for sure.

A little online sleuth work turned up nothing, however. Anyone out there have a better idea?

> Whether Robert H Boyer is any relation to Elizabeth H Boyer, the author

Another fair question. They certainly were working around the same timeframe… ELizabeth published her first novel, The Sword and the Satchel, in 1980.

But again, my rudimentary skills with Google got me nowhere. Perhaps someone more in-the-know can comment.

I had no idea about that essay collection — and it sounds right up my alley. Thanks for the link!

I am a stone Boyer and Zahorski fan, having fallen into the dark fantasies of Dark Imaginings and never quite climbed back out again. The Fantastic Imagination volumes I also enjoyed. So, of course, I knew nothing of their 1992 volume, Visions and Imaginings. Some day, I must learn something about this field of literature.

ISFDB has Elizabeth Malczynski credited as the artist for the Fantastic Imagination volumes, as Joe H. has confirmed. She may be best known for her cover of Michael Moorcock’s Gloriana, or the Unfulfill’d Queen.

The Phoenix Tree artist is uncredited, and the same for Visions of Wonder. Visions and Imaginings is credited to Barbara Corey. If I were to offer a guess, I would say that Visions of Wonder is by Michael Mariano, who did the covers for Ursula Le Guin’s The Language of the Night and P.C. Hodgell’s Godstalk.

Did a bit more poking around and it looks like Visons & Imaginings (the 1992 collection) is comprised of selections from their original 1970s anthologies.

Eugene R – ISFDB only accredits the art on Fantastic imaginations II to Elisabeth Malcynski. The style of Vol 1 looks different to me, but i am a bit clueless WRT art and artists can produce work in different styles so maybe? Wither which way love the covers, all of them.

I agree with Tony — the style on FANTASTIC IMAGINATION I looks different from II. Even the medium looks different. FI1 and THE PHOENIX TREE look like oil paintings, and FI2 looks like a watercolor.

But that could easily be due to the reproduction. I’m no expert either.

> If I were to offer a guess, I would say that Visions of Wonder is by Michael Mariano, who
> did the covers for Ursula Le Guin’s The Language of the Night and P.C. Hodgell’s Godstalk.

That’s a good guees! Just looking at the cover of the former, there are definite stylistic similarities. 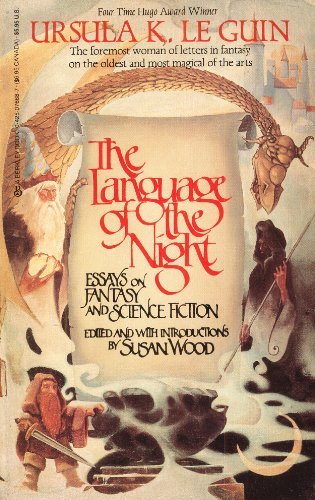