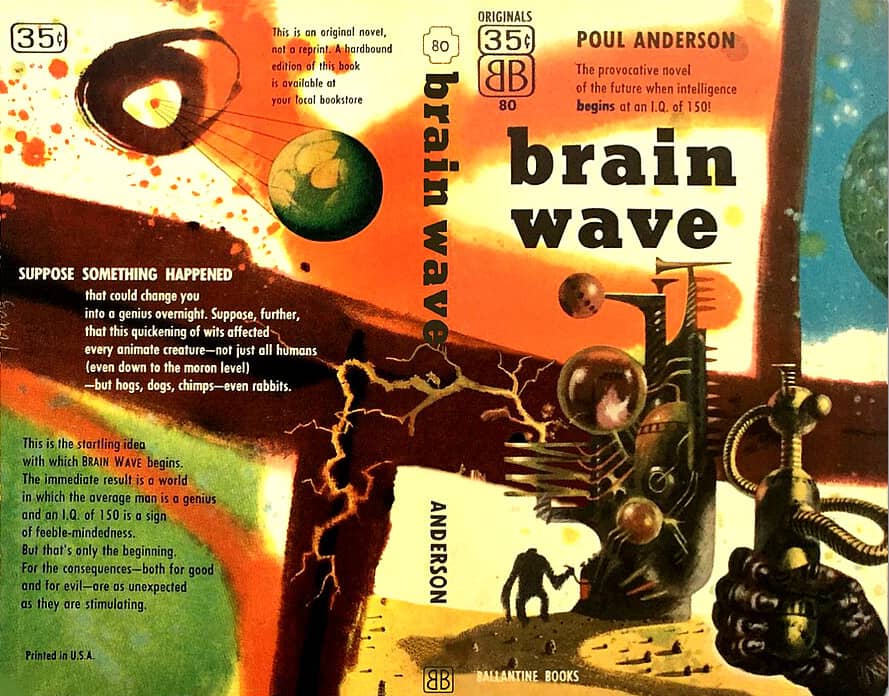 Poul Anderson was one of my favorite science fiction writers when I first discovered the genre. That interest didn’t survive into adulthood. While I still read Vance, Zelazny, Delany, I probably haven’t picked up a Poul Anderson novel in 30 years. It’s mostly neglect, rather than any conscious choice. It’s simply been too long since a Poul Anderson book survived the cut in my to-be-read pile.

I finally read James Davis Nicoll’s Tor.com article Celebrating Five Favourite Works by Poul Anderson, published on the 93rd anniversary of his birth, November 25, and it was a fine reminder of why Anderson’s work used to appeal to me… and why much of it maybe still does. Here’s Nicoll on the the 1953 novel Brain Wave.

The Earth emerges from an intelligence-suppressing field. Every creature that can think suddenly finds itself five times smarter. All humans of normal intelligence wake to find themselves geniuses. Animals discover that they can now think around the barriers used to control them. Human institutions crumble because humans are too bright to believe in them, while the agricultural systems on which we depend are themselves threatened by animals no longer willing to be stock or prey.

This could very easily have been an apocalyptic tale (superhuman humans shrug and carry on eating creatures that now fully understand what’s going on) — but that’s not the direction in which a comparatively young Anderson took his novel. Instead, the various viewpoint characters do their best to find new, better ways to live.

That’s a strongly appealing review, especially for a 66-year old book. But in many ways that matter, Anderson still speaks to modern readers. As Nicoll writes in his review of The Enemy Stars, “Anderson delivered on the promise. He took worldbuilding very seriously. He understood the sheer immensity of the universe… There will never be an end to wonder.” 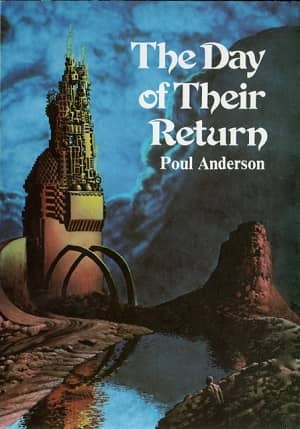 Here’s Nicoll’s brief summary of After Doomsday, which in some ways is even more appealing — if only for its wonky old-school science fiction premise.

In After Doomsday, the USS Benjamin Franklin returns from the galactic core to find Earth murdered…. The culprit is unknown. It is up to the crew of the Benjamin Franklin to find a new homeworld and save the species! Or at least it would be if the U.S., hesitant to expose women to the dangers of space, had not staffed the Franklin with three hundred men.

While I’m on the topic, James Davis Nicoll has written some of my favorite articles at Tor.com recently. They include:

Even if the painting has nothing to do with the contents of the book I love Richard Powers artwork. And I don’t usually like surreal artwork.

It is a gorgeous cover. You can see why Powers swept away much of what came before in SF covers when he arrived on the scene in the early 50s.

Poul Anderson seldom disappoints. I finished “Operation Chaos” not too long ago and thoroughly enjoyed it.

I haven’t read that one, but I’m tempted. But Gabe Dybing wrote a review for us back in 2015:

I would like to second Mr. Lizzi’s recommendation of “Operation Chaos”; it is one of my favorites from an author who was a giant in both SF and Fantasy. Another reason they might be worth looking at is that I think these linked stories lie at the roots of what we now call Urban Fantasy.

Most people don’t realize that Operation Chaos is tied to three other works by Poul Anderson, two of which are mentioned by Gabe Dybing in his review. Those books are:

Together they form a loose cycle of books dealing with parallel worlds, magic, technology, love and war. But it is Operation Chaos that is the heart of it all: the first story in that book is “Operation Afreet”, which was originally published in 1956, years before Three Hearts & Three Lions. All four books are worth a look.

> Most people don’t realize that Operation Chaos is tied to three other works by Poul Anderson, two of which are mentioned by Gabe Dybing in his review.

Count me as one of the people who didn’t realize that!

Thanks for cluing me in.