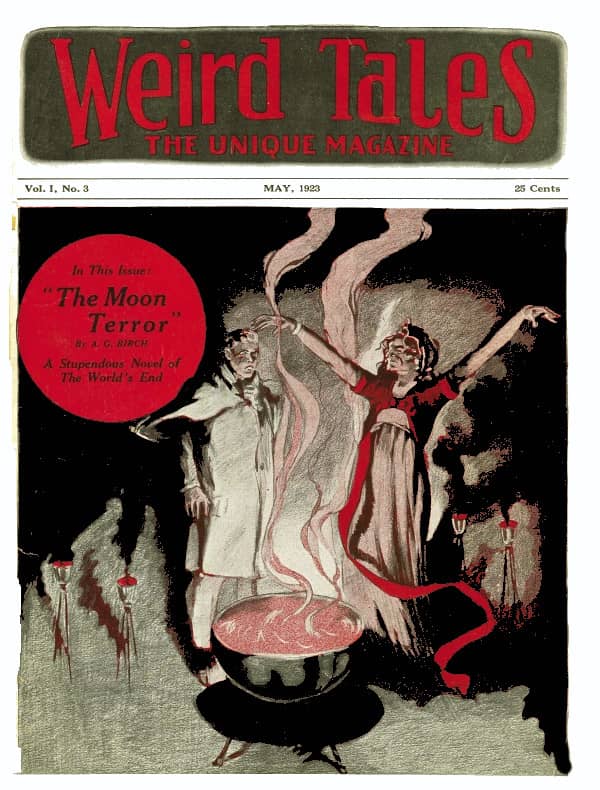 This time we’re considering another early Weird Tales, the third issue, May 1923. This was one of the oversized bed-sheet sized issues and contained 21 stories by 22 authors. Astonishingly, fourteen of these authors were one and done, with no additional published stories in the sf/fan field. Another two have two stories listed at the Internet Speculative Fiction Database.

The two most significant authors in this issue are Vincent Starrett, a long-time newspaper man who produced several out of genre books and a single slim collection of fantasy stories published by Arkham House in 1965. The other is Edward Bulwar-Lytton (yes, of a “dark and stormy night” fame), represented by a reprint that is more of a curiosity than anything else.

The other author worth commenting is Culpeper Chunn (a byline that screams pseudonym), whose real name was Seymour Cunningham Chunn (1889-1927). His two stories in Weird Tales are his only listed genre works, but if you google his name you’ll find repeated offers for his book Plotting the Short Story (it’s in public domain, so naturally it’s currently available in countless editions, even on Amazon) so he must have some kind of track record, somewhere. But that’s not why he gets a mention here. The protagonist of “The Whispering Thing,” co-authored by Laurie McClintock (who otherwise has left no trace in the written record), is Jules Peret, a French-born ex-policeman and current consulting detective, “a small, effeminate man with delicate features, small hands and feet,” given to uttering extravagant oaths. Sound familiar? The first Jules de Granden story appeared in Weird Tales in 1925. I have no explanation for this extraordinary coincidence.

Nineteen of the stories were contemporary (90%); two were set in the past. The preferred setting in this issue was the United States with 76% (16/21) set in the U.S., one in the U.S. and Canada and one in the U.S., the U.K. and Australia. Other settings were the U.K., Canada, and Brazil. Only 15 (71%) had a fantastic element. Only eight rose above mediocrity, giving this issue an over-all low rating of 3.24.

Best story of issue goes to Mollie Ellis Frank’s non-fantasy (not even weird, frankly) “Case #27,” a tip of the hat to forgotten writers, everywhere. 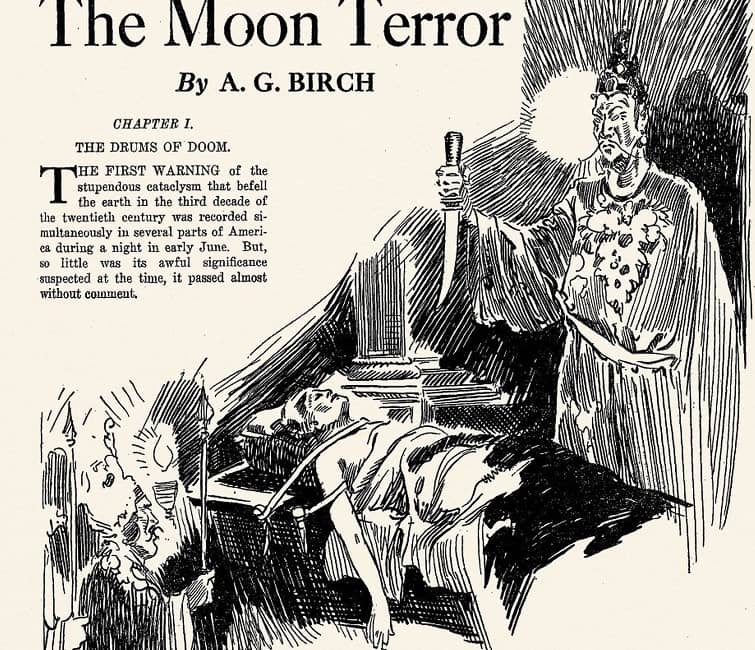 Art for “The Moon Terror”

Birch, A. G. (4) “Moon Terror, The.” [Contemporary US/Canada: West Coast] I/II Wireless calls from unknown source are a prelude to worldwide earthquakes are revealed to be from a fanatical sect of Chinese “sorcerers” (constantly called that though they engage in no magical activity) seeking to bring about the return of the “two moons,” by ejecting part of the Earth into the sky. [False history. Human sacrifice. Gun battles. Earthquake machine, hydro-electrically powered. Yellow Peril racism. Tidal waves. Earthquakes. Scientist, multi-disciplinary.]

Whipple, Kenneth Duane. (-/4) “Secret Fear, The.” [US Urban, Contemporary] A man dies from heart failure after mistaking a simian-looking man for a gorilla that had escaped from a zoo. [Phobia, simians. Death, from fear] 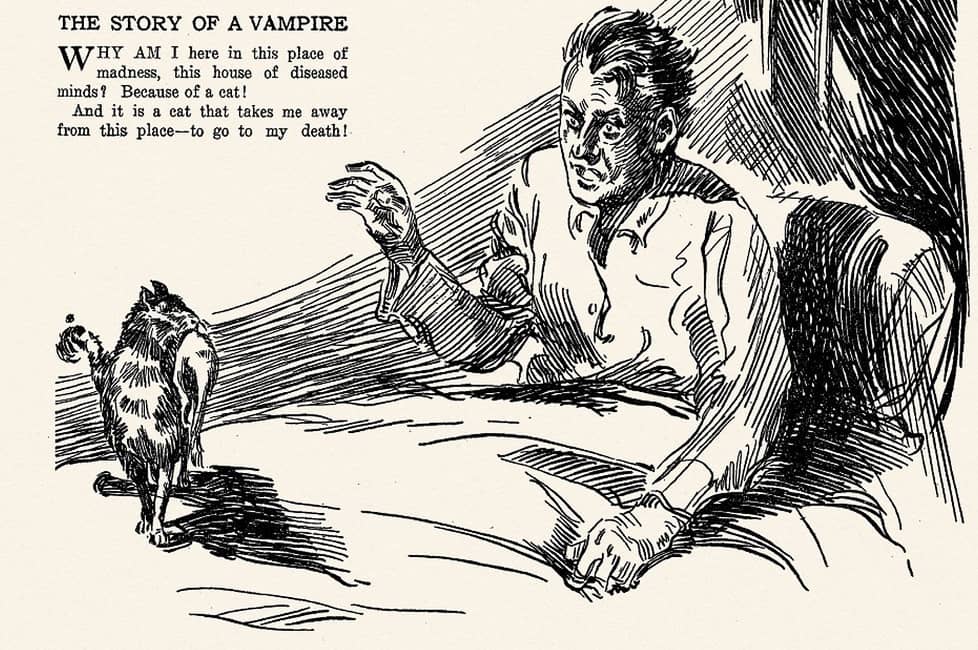 Barron, William P. (5) “Jungle Beasts.” [US, Contemporary] An over-wrought mish-mash. Asylum attendants read a manuscript left by a just-released inmate that relates how he hated his grandmother’s cat because he’d had a “vision” of the past in which he saw the cat (as a sabre-tooth tiger) kill his child, giving them a purported shared history to justify his hatred. He kills the cat’s kitten as revenge, then finally the cat herself. Ultimately, he inherits the house. When he brings home his new wife, he notices her purported resemblance to his grandmother’s cat. He tries to strangle her, but is pulled away by the servants and sent to the asylum, but is cured and released. The attendants go to his home to find him dead, the cat he’d killed years ago standing on his chest. [Narration by ms. Asylum. Animal abuse, cats. Uxorcide, attempted. Vengeance, unrighteous. Vengeance, righteous. Reincarnation. Chinese themes.]

Kilman, Julian. (2) “Golden Caverns, The.” [Brazil, Contemporary] An exploratory expedition turns into a treasure hunt as they discover an underground city of a lost Asian race, fight off a rival expedition, and lose most of the treasure. Aptly described in blurb as a “condensed novel”. [Underground labyrinth. Lost race, Asian. Treasure, gold artifacts and jewels. Death by blowgun, heat from magnifying glass, crocodiles, general privation, gun. Jungle. Desert (in Brazil!).] 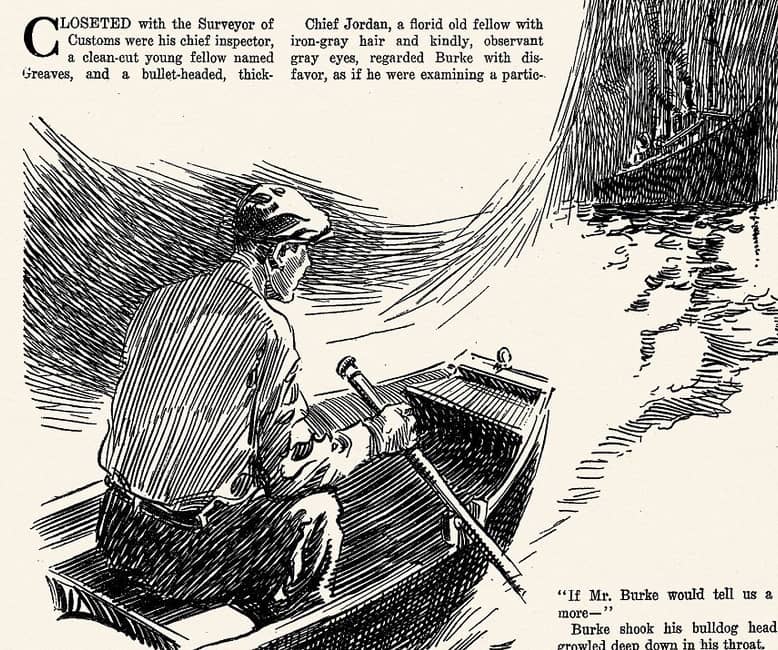 Triem, Paul Ellsworth. (2) “Vials of Insects.” [Oakland, US; Contemporary] A police informant rats out his accomplice, who is ultimately killed by the police, because he wants his girl. The death is revenged by the Chinese protagonist who releases infected mosquitos to bite the informant. [SF. Death by mosquito. Love triangle. Smuggling, opium. Revenge, righteous] 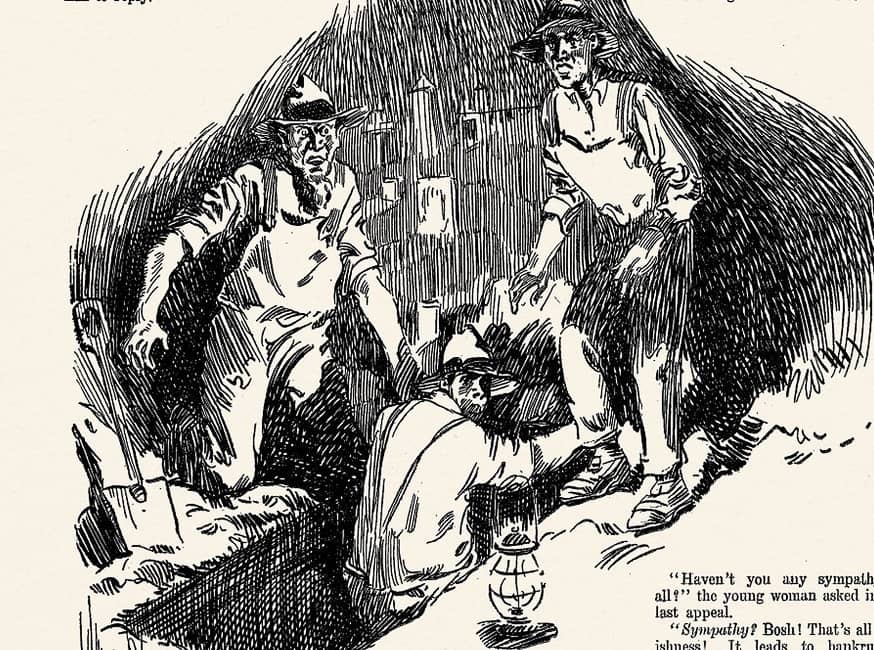 Crane, G. W. (-/5) “Eye for an Eye, An.” [US village, Contemporary] Stereotypical miser forecloses the mortgage of a young teacher and her invalid mother in the most stereotypical way imaginable, resulting in the stereotypical death of the mother. The miser develops slow onset paralysis as well as a fear of being buried alive. He goes to great lengths to avoid this fate, which are all circumvented by the girl. He suffocates. She throws herself into the river and drowns. [Miser. Premature burial. Murder, suffocation. Vengeance, righteous. Suicide, drowning.]

Humphreys, M. (2) “Floor Above.” [US, Baltimore; Contemporary]. A man unexpectedly receives a letter from his best friend who’d disappeared ten years previously, asking him to visit. He finds his friend in an isolated house, looking unhealthy and strangely uncommunicative. The night before he plans to leave, he finds his friend’s body in a room on the floor above sitting at a desk and writing a letter dated ten years previously, asking him to visit. Well written and chilling, if ultimately unexplained. [RFD, ghost. Ghost haunting house]

Starrett, Vincent. (3) “Penelope.” [US, Contemporary] Narrator relates an adventure he has when he “comes under the influence” of his “natal star’ Penelope, which, as it approaches the Earth literally draws him to it so that he “falls” upward. Weird, but rather pointless. [Story by narration.]

Sisk, Herman. (5) “Purple Heart, The.” [US, rural, Contemporary] Utterly pointless story about a man seeking shelter in a cabin haunted by a ghost who lures travelers into the cabin on the anniversary of his murdered father’s death and frightens them with an image of a purple human heart. [RFD, Ghost. Haunted house.]

Emmons, E. Thayles. (4) “Two Hours of Death.” [US Contemporary] A scientist invents a drug that separates the soul from the body and doses his friend with it. Revealing that he actually hates him. He tries to destroy his body before his friend can re-enter it. but fails. [Insanity. Scientist, mad. Drug, fictional. Attempted murder, knife.]

Craigie, Hamilton. (-/2). “Midnight Black” [US, Contemporary] A married woman encourages another man’s man’s advances with her flirtatious manner and when someone breaks into her house at night she thinks it’s him. Her husband kills him in a fight, but it turns out to be a nameless intruder. Not very weird. [Killing, self-defense. Love triangle.]

Bulwer-Lytton, Edward. (4) “Haunted and the Haunters; or, The House and the Brain, The.” [UK, London, Contemporary (1909)] Reprint. Hopelessly convoluted tale about a haunted house which initially seems to concern lovers who murder the woman’s husband to get his fortune then starves his son, but ultimately comes down to a hidden chamber wherein an earlier inhabitant of the house had left a magical device that cursed the house and all who lived there. Once the device is destroyed, the haunting stops. [Magical device. Haunting, by curse. Murder, for inheritance scheme. Child abuse.] 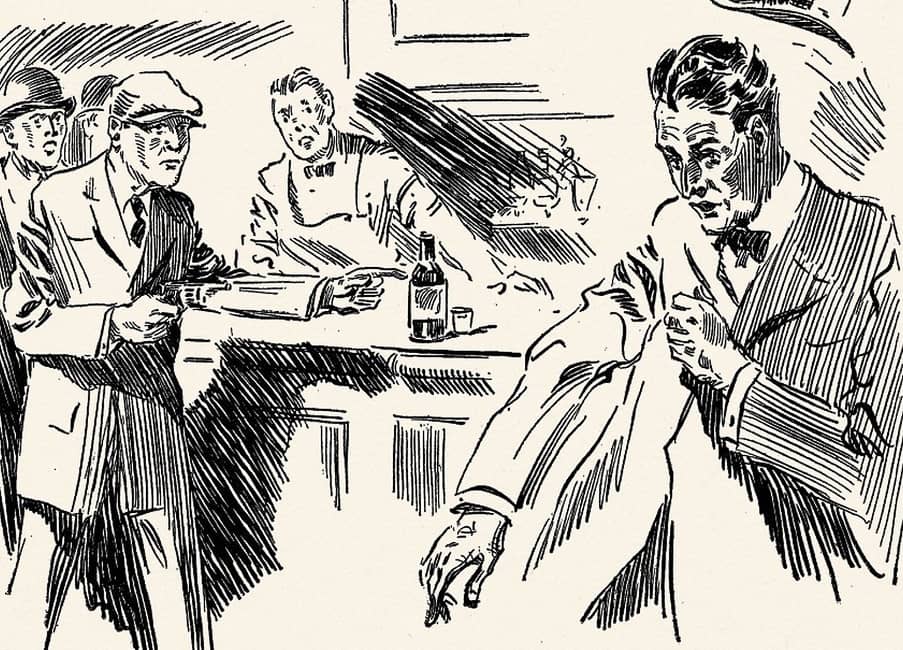 Moss, F. K. (5) “ Death Cell, The.” [US, Denver, Contemporary] A man kills his best friend while mistakenly thinking he’d stolen the woman he loves. His (surviving) friends hatch an improbable scheme to revive him after he’s hung, which, even more improbably works, though, with even greater improbability, the spirit of his murdered friend comes back to inhabit the now vacated body. [Love triangle. Murder, by gun. RFD. Execution, hanging. Transmigration of soul.]

Holden, Lyle Wilson. (3). “Devil Plant, The.” [Contemporary UK, US, Australia] Starting with his school days, a man is bedeviled by a purported friend who constantly frames him for his own wrong-doings. The two share an interest in exotic botany, so the narrator takes his purported friend to view the rare “octopus plant” he’s discovered, which enthralls the friend with it’s drug-like nectar and ultimately sucks him dry. [Revenge, justified. Death by plant. Love triangle.]

Wilson, F. Walter. (5) “Thunder Voice, The.” [Past (1800’s), Canada] An isolated valley is haunted by a mysterious voice and strange doings caused by a feral ape-like child who was born after his pregnant mother viewed a caged gorilla. [Pre-natal influence on fetus. Feral child, ape-like. Kidnaped woman, falls in love with assailant. Exotic animal, gorilla.]

Merrit,Wm. (-/3) “Finale, The.” [US Contemporary] A man kills the rival who’d taken his beloved away mistreated her. Then commits he suicide. [Love triangle. Homicide, justifiable. Vengeance, righteous. Suicide, poison (absinthe).]

Anonymous. (2) “Closed Cabinet, The” [19th/early 20th century, UK] A story curiously unmoored in time, set at an isolated country manor. A young female visitor sleeping in a bedroom with an ancient locked cabinet has haunting dreams. She channels the spirit of the previous occupant, who’d murdered her abusive husband in that same bedroom but resists re-enacting the murder and breaks the curse. [Dreams, disturbing. Haunted house. Christian themes. Family curse. Enchanted furniture, cabinet.]