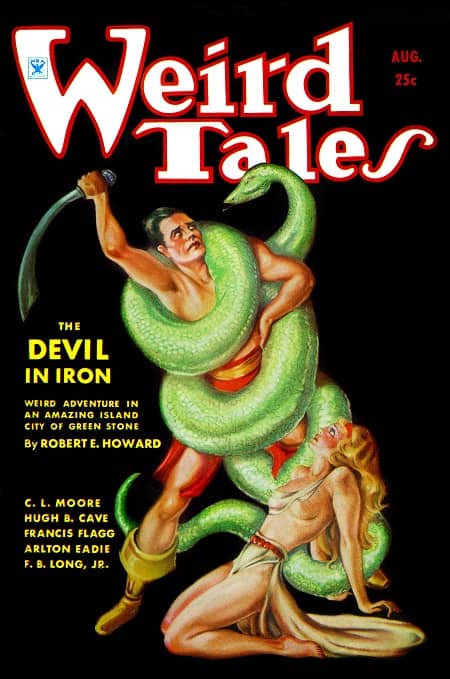 Yet another Brundage cover

We have another nine stories to consider this time around, but what is particularly noteworthy is that all nine of the authors are at least somewhat well known. The most obscure on the list is probably Anthony Rud (here writing under the name of R. Anthony, perhaps best known for his story “Oooze,” arguably the best offering in WT’s initial issue [3-23]), which is partially due to his passing in 1942 at the relatively young age of 49. Also unknown today is Arlton Eadie, who died even earlier (1935) also at 49, but everyone else had long writing careers, although some, of course, have fallen by the wayside due to the relentless march of time.

Of the nine stories, eight (89%) are either fantasy or science fiction, several actually in the gray area between the two genres. Seven stories (78%) have contemporary settings, one (11%) is set in the far past and one (11%) in the future. Four (44%) take place in the United States, and one each in a fictitious realm in the far past, on the planet Mars, in the South Seas (mostly), Great Britain, and a fictional Central European country. Three (33%) are part of a series. 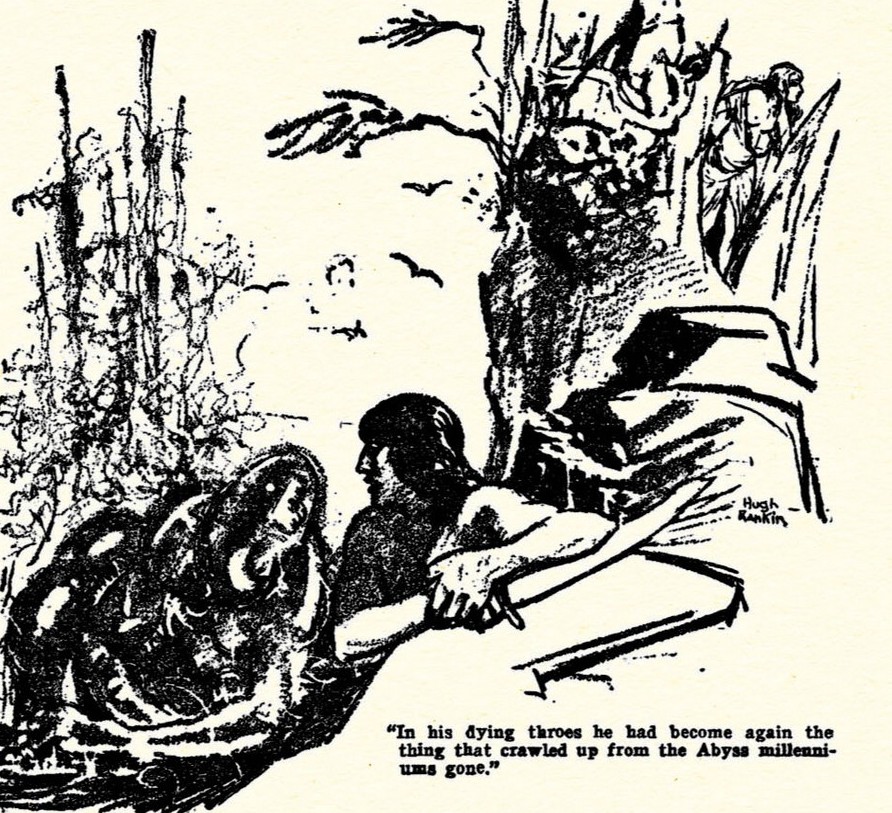 Howard, Robert E. [Conan] (2) “Devil In Iron, The” (Turan, fictitious realm; Hyborian Age, far past, fictitious.) As chief of the upstart kozaki, Conan is a thorn in the side of the Turanian king who hatches a plot wherein a slave girl lures Conan to an island deserted but for the ruined city of Dagon, which has recently been reconstituted by its revived god, much to the consternation of Conan and the Turanian agents sent to slay him. Written with the usual Howard verve, although the plot relies too heavily on coincidence and vague prophetic visions to supply the necessary details. [God, alien. Giant animal, snake. Magic artifact, knife. Ruined city, reconstituted. Deicide, by magic artifact. Sword fight. Death, by sword.] 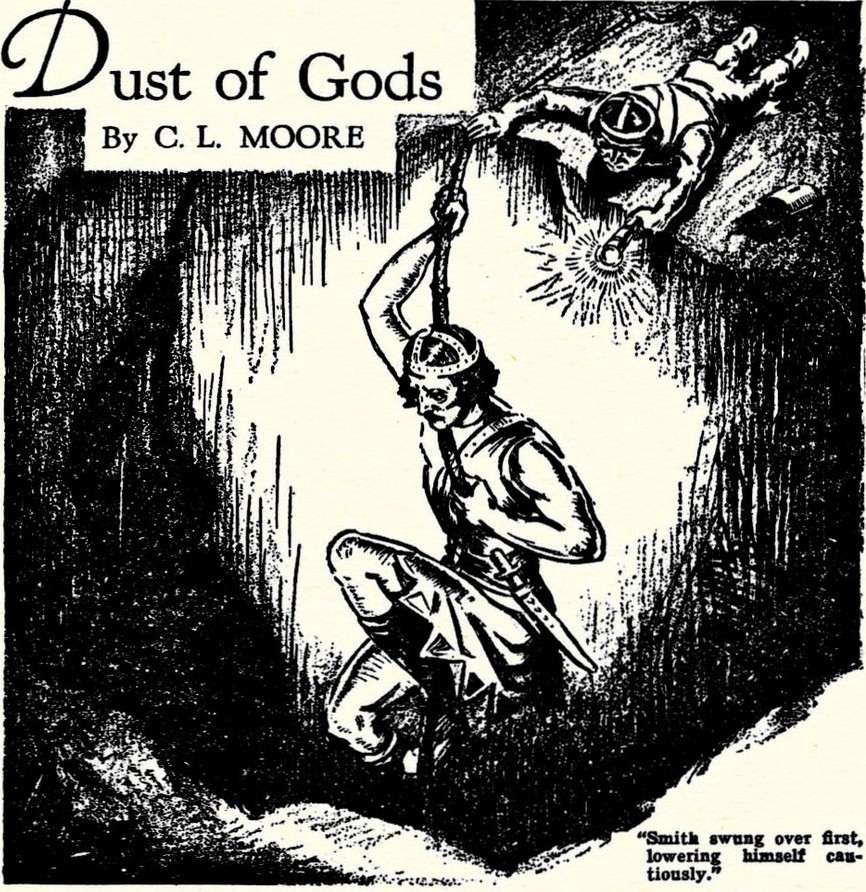 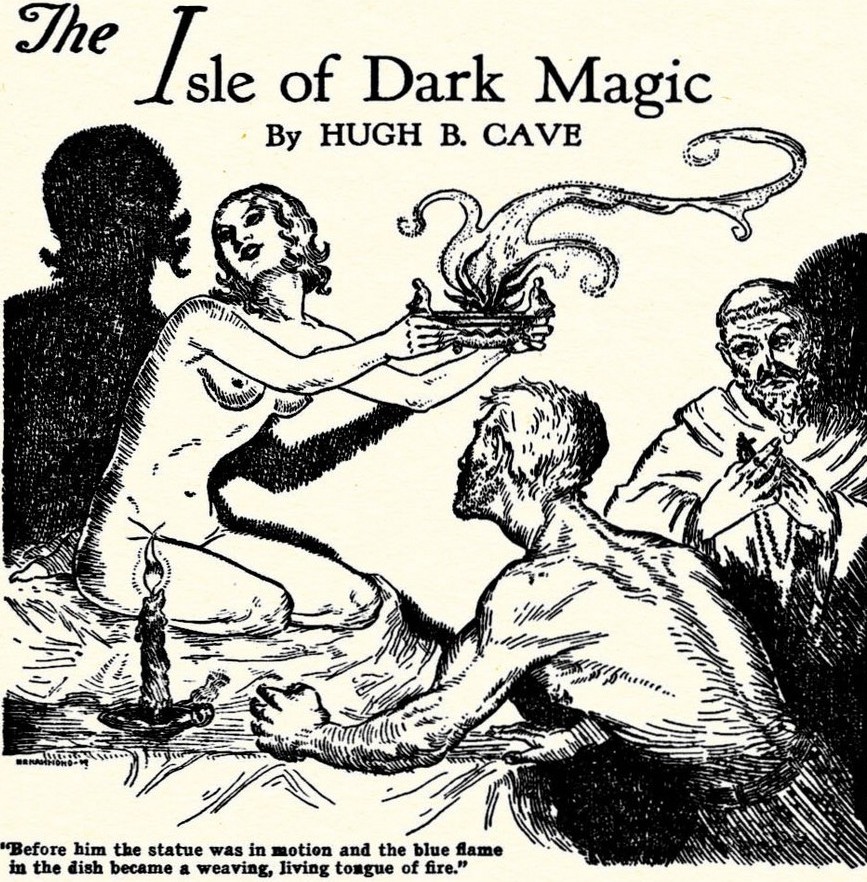 Cave, Hugh. [Cthulhu Mythos.] (2) “Isle of Dark Magic” (South Seas, Contemporary) A rich young guy expelled from med school because of dubious experiments comes to a remote island with the hope of resurrecting his dead lover by animating a statue using a combination of a Black Mass and beseeching Cthulhu Mythos entities, but his incantations also reanimates her corpse. It travels across the world to be with him and kills both him and the statue out of jealousy. Well-written for most part and kind of original, but doesn’t entirely make sense. [Love triangle. Murder. Sorcerer, black. Black Mass. Cthulhu Mythos, Nyarlathotep. RFD, revitalized corpse. Magic object, statue, animated.]

Long, Frank Belknap. (3) “Beast-Helper, The” [Central Europe, Trivania, fictional country; Contemporary] A dictator controls a gorilla with a “brain tube” and sends it to assassinate his rivals. When an American reporter kills the beast, the dictator dies. [Mind control, by technology, animal, gorilla. Death by animal, gorilla.] 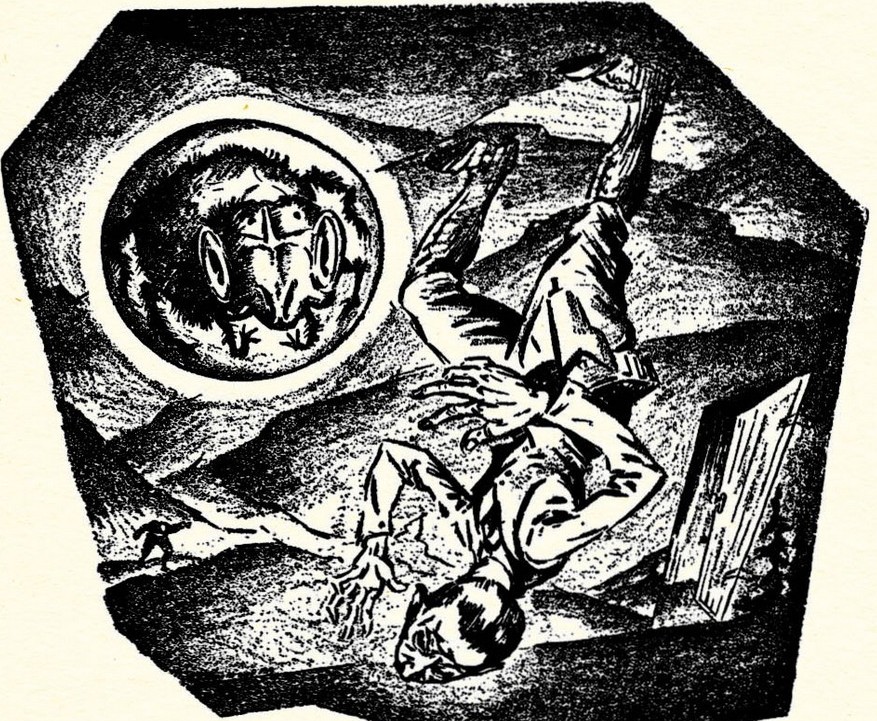 Flagg, Francis [George Henry Weiss] (1) “Distortion Out Of Space, The” [Western US, Contemporary.] A meteor, which is actually an interstellar spaceship, crashes into a house, disrupting the space continuum and exposing alien vistas. The house’s inhabitant accidentally kills the alien and space returns to normal. [SF. Alien. Dimensional disruption. Death, accidental.]

Counselman, M(ary) E(lizabeth). (2) “Three Marked Pennies, The” (Southern US town, fictitious, Contemporary] A bizarre contest in which three marked pennies have been placed in circulation in a small town. After a week, three “prizes” will be awarded to those who have the coins: a hundred thousand dollars, a trip around the world, and death. Original concept with a minor pay off. [Murder, poison, snake venom]

Ernst, Paul (-/1) “Marvelous Knife, The” [US, Contemporary] A murderer sets a madman up to take the rap by telling him that a knife is magic and can do no harm. [Murder, by knife. Insanity.]

This was a very strong issue, with honors for best story going, in my opinion, to C. L. Moore. The supporting stories were stronger than usual, contributing to the high 1.67 rating, making this, so far, the second best issue. But there’s still a long way to go.

Speaking of which – what would you readers out there in internet land like to see covered in future installments? Any particular issue? Any particular writer? I have some very early issues – including the first – almost ready, but I hesitate to post reviews of writers who are largely obscure and stories which are totally forgotten (many for good reason). I like the idea of examining WT’s evolution, but what do you think?

Scott Oden wrote about The Devil in Iron for our ‘Hither Came Conan’ series here at Black Gate.

I also like the examination of Weird Tales’ evolution.

That’s a good post On “Devil,” able to discuss it in greater detail than I can considering it as one of a number of stories to be covered. Pretty much agree with everything said there and in the comments. One in particular stuck out for me — “there are no bad Conan stories, at least by REH.” This is holding up as true for me as well, at least so far as this current re-read goes. I haven’t revisited those stories, at least in any great detail, for some time now, so we’ll see how it eventually goes, but so far, so good.

Also, thanks for the feedback on the WT evolution. It is instructive to measure these “classic” issues against some of the the earlier efforts, so look for some early issues in later installments.

The whole idea behind ‘Hither Came Conan’ was to show that there was good to be found in every Conan story by REH. Sure, there are some you don’t hurry back to read – Several contributors asked me who ‘got stuck’ with Vale of Lost Women’ – but even in the lesser stories, REH’s writing and talent shine through.

I used to think ‘God in the Bowl’ wasn’t much. Then I examined it as a police procedural (before that term existed) and I realized REH was trailblazing.

The guy was simply just a fantastic writer.

Yeah, you can’t hit a home run every time you come to bat, no matter how hard you try, but Howard managed to achieve a very high percentage of success, and not only in his Conan stories. This is particularly true when you compare the originals to the pastiches. Not all of those are bad, some of them are very good, but very few if any compare to the best of Howard. He came out of nowhere and he was sui generis. He died way too young. You have to be satisfied with what he gave us, but I also sit here and think about what might have been.