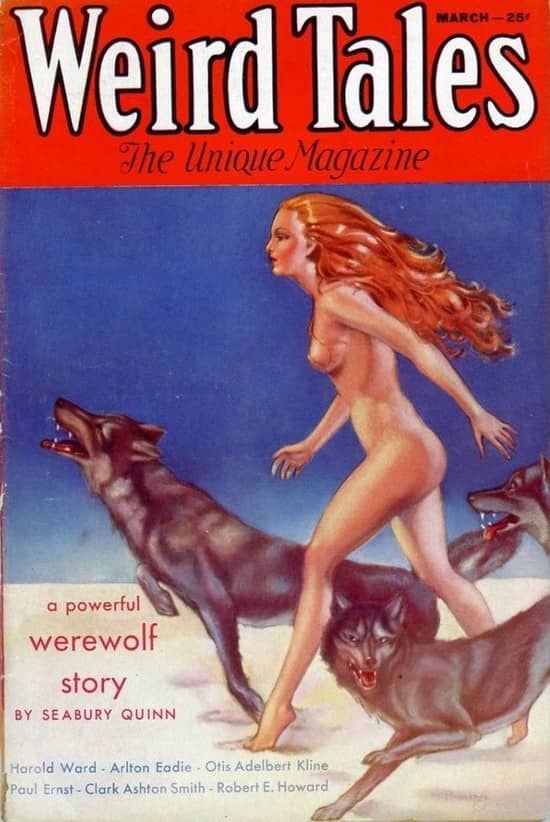 This installment of the deep read of the Unique Magazine examines the nine stories in the March, 1933 issue of Weird Tales. We see some familiar names from the previous column: Seabury Quinn, Robert E. Howard, Clark Ashton Smith, and Harold Ward, as well as a couple who might be familiar to fans of pulp fiction, Otis Aldebert Kline and Paul Ernst. Kline is probably best known for his imitation Edgar Rice Burroughs planetary adventure novels. He was also Robert E. Howard’s literary agent for awhile, which will no doubt come up for discussion at the appropriate time. Paul Ernst was a rather prolific pulpster, possibly remembered mostly today for writing the Avenger hero pulps, but he was also a frequent contributor to Weird Tales.

Seabury Quinn [Jules de Grandin] (2) “Thing in the Fog, The” [US, PA, Harrisonville, fictional town; Contemporary] Occultist de Grandin and Dr. Trowbridge literally run into a man on the street being attacked by a werewolf. He’s only injured but his companion is killed by the creature. They soon learn that his future wife was once the werewolf’s fiancee and that he’d initiated into his clan. After the wedding, the bride is again transformed into a wolf by a potion given her anonymously by her werewolf ex, but she attacks him while both are in their canid forms, giving de Grandin the opportunity to deliver a fatal shot. De Grandin then releases her from her curse by using an incantation in the form of a prayer. [Medical doctor. Occultist. Occult being, werewolf. Death by occult being, werewolf. Love triangle. Magic potion. Werewolf transformation by magic potion. Magic incantation, prayer] 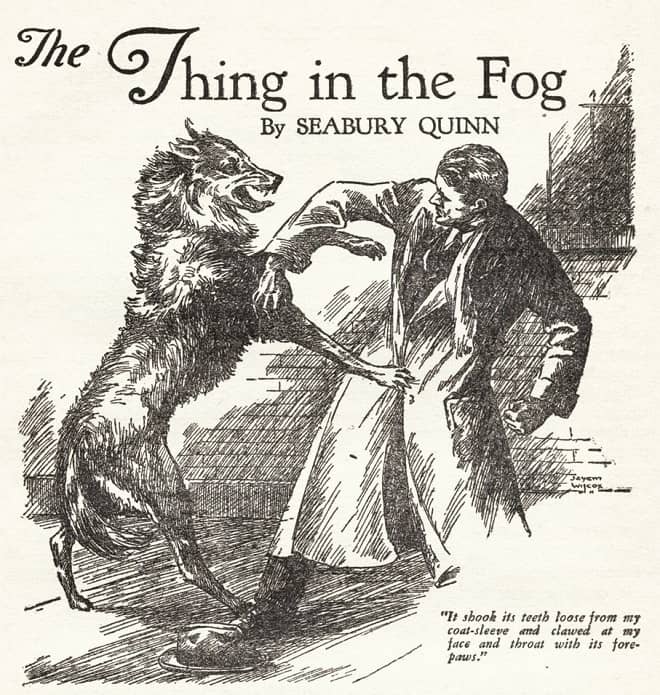 Robert E. Howard. [Conan] (1) “Tower of the Elephant, The” [Zamora, fictional realm; Hyborean Age, fictional distant past] Conan impulsively decides to burgle a sorcerer’s tower when he learns that the fabulous jewel called the “Elephant’s Heart” is among its treasures. He meets a fellow thief on the grounds and they join forces. After eluding the watch lions they climb the tower’s sheer walls to enter from the roof, but the upper floor is not without it’s perils, which Conan’s new acquaintance does not survive. When Conan explores the lower rooms he comes across an enslaved alien of vast age and wisdom who’s the sorcerer’s captive. Acceding to his wishes, Conan puts him out of his misery, effectuating a last great magic that works its just vengeance. [Sword fight. Deaths by sword, strangulation. Death by animal, giant spider. Magic concoction, poison mist. Magic items, rope and jewel. Alien being. Sorcerer, evil. Revenge, just.] 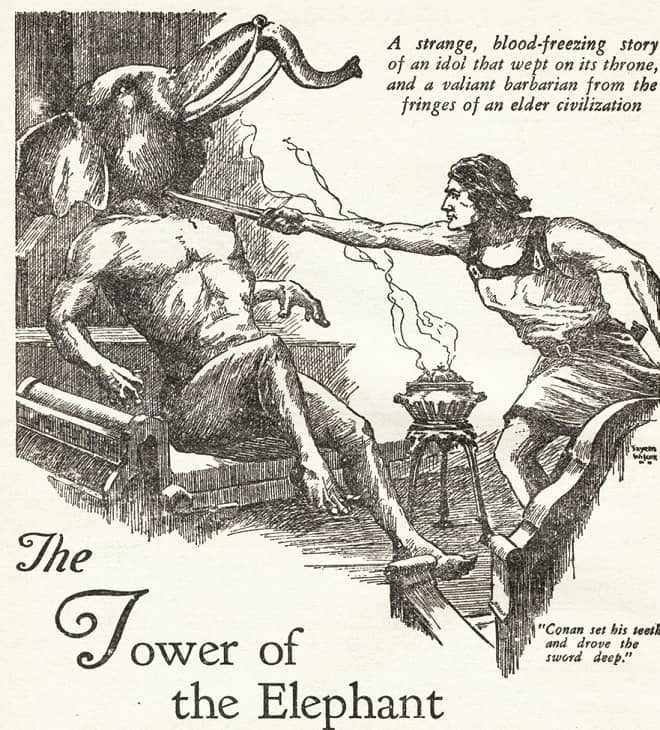 Harold Ward, (5) “Germs of Death.” [US, NY, NYC; Tibet, Contemporary] A Chinese “scientist,” who fears death attempts to remove “the germs of death” from his body. Using his superior will-power he hypnotizes an eminent bacteriologist from afar, ordering him to kill himself. He brings his spirit to Tibet and puts it into the body of a servant. The bacteriologist isolates the “death germ”and creates “viruses” which he injects into other people (also somehow involving guinea pigs) to create a vaccine against death. He succeeds, injects himself and then smashes the vial before his captor can take a dose before he conveniently dies of a stroke. The bacteriologist snaps back into the body of the servitor who then convinces him to commit suicide, so he can return to his body. The bacteriologist’s spirit is “drawn” to his own body which has been in a crypt for ten years. This last part is revealed in a manuscript written by the servant, who has been in an asylum all this time. What? Confused in concept and execution. [Scientist, bacteriologist. Mad scientist. Immortality, achieved. Astral projection. Mind control, hypnosis. Medical experiments, on the dead. Suicides, by wrist-slitting and defenestration. Narration by manuscript. Asylum. Narration by manuscript.] 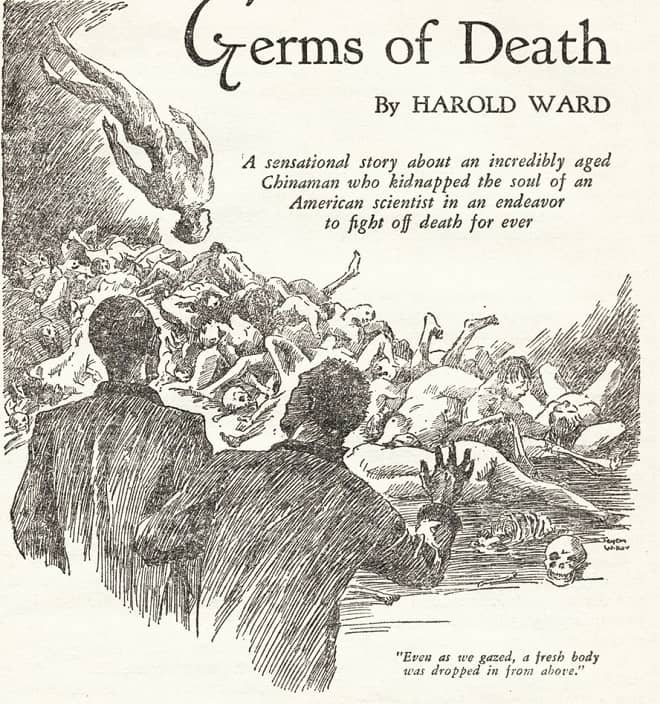 Kline, Otis Adlebert. (5) [Venus series} “Buccaneers of Venus” [Venus, Contemporary?] (v/vi) Interplanetary adventure. Robert Grandon of Earth works his way up, as usual, from tourist to king and husband of the most beautiful girl in the world. This third book of the series starts when Grandon (already a king) decides to go fishing after his glossed-over wedding night, and gets lost after an attack by the “yellow men” (not actually H. sapiens) which sets off a seemingly endless series of captures and escapes with them criss-crossing various ecological zones on a daily basis and encountering various wild animals and unsavory natives whom Grandon overcomes to recover his bride. (Oddly, when they meet after this endless to-ing and fro-ing, they don’t exchange a hug or kiss or even a, “Hi Bob, how you been?”). Characters are all lesser versions of Edgar Rice Burroughs tropes, the world-building is slipshod at best and undeniably racist at worst, the writing is clunky to the extent that nothing is exciting, especially the action scenes, and the love scenes are embarrassingly inept. [Racist, Asian. Aliens lusting for human women. Secret rebel cabal against tyrannical government. Deity, giant snake. Human sacrifice. Battles.]

Arlton Eadie. (2) “The Devil’s Tower.” [UK, London, Past (1917)]. A soldier confined in the Tower of London for excessive drunkenness is killed by ghosts of ancient torturers. [Return from dead, ghosts. Haunted building. Death by torture.]

Clark Ashton Smith (1) [Zothique] “Isle of the Torturers, The” [Zothique (Earth), Far Future] A long-predicted plague strikes the realm of Yoros. Through the agency of a magic ring, only the young king and a few slaves escape the Silver Death. They attempt to flee to an isle that’s part of the realm, but are thrown off course by a magically raised storm and shipwrecked on the Isle of the Torturers, who, true to their name, proceed to ply their sadistic trade. At first the king remains hopeful, for a women promises to save him, but her promises are only a ruse to enhance the exotic tortures. The king tricks them into removing his ring, and the Silver Death, held in abeyance by the ring’s magic, devastates the isle. [Plague, mystic. Magic item, ring. Sorcerers, good and evil. Torture, exotic. Return from dead, animated corpses. Love, pretended for malevolent reasons. Revenge, just. Storm, magic.] 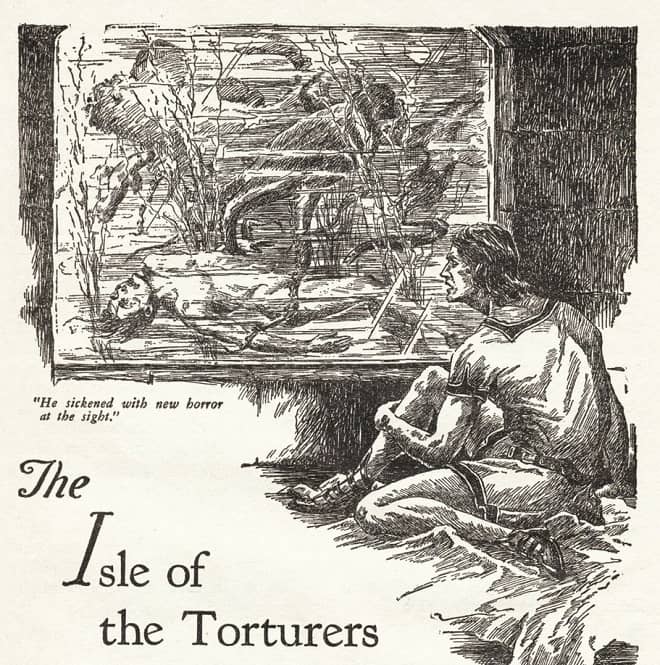 Paul Ernst. (1) “Akkar’s Moth” [US, Contemporary] Black magician uses his power on a lawyer representing his foe to put the lawyer’s spirit into that of a moth. The moth dies, the lawyer’s body, inhabited by the moth, is put into a sanitarium. [Sorcerer, evil. Transmigration of souls, human to animal (moth). Asylum.]

S. Gordon Gurwit. (3) “The Letter.” [US, Contemporary] A fight in a boarding house results in a medical student’s death at the hands of his friend, who’s convicted of murder. The student sends the DA a letter from jail detailing the night’s actual events. His friend was experimenting on a shrunken head by soaking it in a nutrient bath which brought it back to life. Moved by both pity and fear, he sought to destroy the head, but accidentally killed his friend. When the DA calls the jail to talk to the prisoner, he discovers that the prisoner had a seizure and died. [Scientist, mad. Shrunken head. Return from dead, medical treatment. Death, accidental. Narration through missive]

Maurice Level. (-/2) “The Look.” (France, Contemporary) A doctor can save his mistress’s husband from death by a gunshot wound, but, perhaps accidentally, lets him bleed to death, thereby ultimately ruining their love for each other. [Love triangle. Unfaithful friend. Unfaithful wife. Loss of love. Death, possible accidental]

All and all a number of fine stories in this issue, but the Ward and the Kline drag the rating down to a 2.44, which is just this side of good. Hard to say why those two tales passed editorial muster. In regard to the Kline, interplanetary adventure was always somewhat controversial among Weird Tales readers, but Kline, although he had his fans, was never one of the better examples of that sub-genre. The Ward story is poorly written, lacks even a rudimentary grasp of science, and literally makes no sense if you try to puzzle out all the body switching. Quinn deserve some props this time for adding some refinements to werewolf lore, particularly the notion that not all werewolves are of necessity evil (though this concept was not original with him). Again, Harrisonville seems a mighty unlucky place to live…or maybe it’s de Grandin who’s a magnet for occult forces, calling them forth like blood to a school of piranha.

Thank you, Mr. Miller, for giving us a glimpse of Weird Tales in its prime.

I must say that I have to agree with you about Harrisonville, NJ although the image of Jules de Grandin as an occult magnet is amusing since Quinn wrote more than ninety de Grandin stories (although not all of them were based in the Garden State.

Yeah, the first handful of de Grandin’s had international settings. I can see that it was easier on Quinn to have him settle down in one place, but even he probably didn’t realize at the time that he would write 93 stories in the series. Longest running occult detective series of all time? Off-hand, I can’t think of another with more stories.