I’ve lamented before (more than a few times, as some regular readers have wearily noted) about the death of the mass market SF anthology.  They were a fixture on bookstore shelves a generation ago, and were a great way to discover new writers. In fact, I discovered virtually all of my favorite writers — Roger Zelazny, Clifford D. Simak, Isaac Asimov, James Tiptree, Jr. — in paperback anthologies in the 70s and 80s.

Well, if I can’t celebrate new ones, I can still tell you about the old ones, and encourage you to hunt down a few. At least as long as vintage SF paperbacks remain cheap, plentiful, and easy to find — which looks like forever, if AbeBooks and eBay are any indication. Today’s subject is a neat little one-off anthology by Robert Silverberg from 1969, with an unusual theme: dark science fiction. Here’s Silverberg from the introduction.

In the Soviet Union, I understand, science fiction is supposed to be a positive literature full of positive ideals. Its function is to dramatize the coming triumph of the socialist philosophy and the extension of that philosophy into the universe…. In the United States, too, there are those who prefer their science fiction to be a literature of ideals, demonstrating the heroic fortitude of mankind under stress and depicting the glories of the future… The purpose of the writer of fiction, I think, is neither to glorify not to abuse, but to set down his vision of the universe as he sees it. He should not be a propagandist for the space program, at least not as his basic item of concern….

Once upon a time the bulk of science fiction was written by cheerful Rotarians eager to leap into the lovely future. That was in the 1930’s, when the future still looked pretty good (especially in contrast with the present) and in the 1940’s, when the defeat of the bestial Axis foe was supposed to open the gateway to Utopia. But a good chunk of that future has already unveiled itself since those days of s-f’s innocence, and what has appeared has not been so inspiring. The stories in the present collection reflect that look into the future that is now our present. By measuring the fictional “1963” of 1938 against the real 1963, s-f writers have of necessity suffered a darkening of vision. Hymns to the miracle that is color television become less meaningful when that screen is so often reddened by the blood of those who were our best.

Here, then, is a book of dark dreams for a dark time.

If you don’t mind reading yellowing pages from high-res photos, you can see Bob’s complete 3-page intro to Dark Stars using the pics I took with my new iPhone here and here. 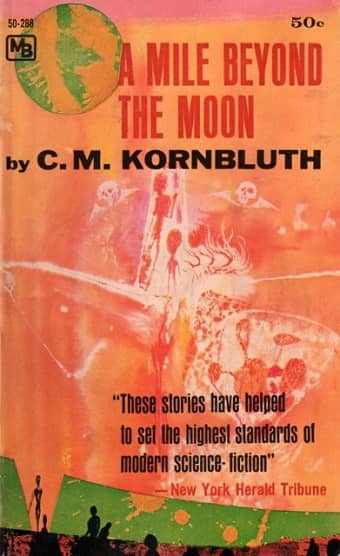 One of the reasons I enjoy Silverberg’s anthologies was that he was widely read among the magazines and original anthologies of the day, and he knew short fiction. Dark Stars draws from a wide range of sources, including the usual suspects — H.L. Gold’s Galaxy, Campbell’s Astounding, F&SF — as well as the British New Worlds, Science Fantasy, Worlds of Tomorrow, Fantastic Universe, Playboy, and even C. M. Kornbluth third collection, A Mile Beyond the Moon, from 1958.

Dark Stars was published by Ballantine Books in December 1969. It is 310 pages, priced at 95 cents. The cover is by Ronald Walotsky.

I didn’t know much about the magazine scene when I started buying my own SF books with paper route money in 1962. I was a senior in high school 6 years later when I even realized my local newsstand carried a few mags, like “Fantastic.” I had to rely on anthologies to get the best of the best, and I grabbed up every one I could find — like “Dark Stars.” The bulk of my SF reading came from those great collections, and from Ace Doubles — and I’ve still got ’em all! “Dark Stars” was one of the best; your post, John, has me eager to dig this out of my basement and revisit it.

Smitty — if you do, tell me which stories really stuck out. This is going to be my reward if I get all my work done this weekend, and I hope to dig into it tonight.

I never wrote in my books when I was younger; after seeing classmates get swatted by the nuns, when I was in grade school, for writing in their textbooks, I guess I figured it was sacrilegious. Years later, as a teacher myself, I wrote, underlined, and highlighted all over my assigned readings, especially when I wanted to emphasize something in the next class meeting. But I see I placed a little penciled asterisk next to a few of the titles that I liked in “Dark Stars”: the ones by Kornbluth, Brunner, Dick, Silverberg, Ellison, Ballard, and Anderson — not necessarily in that order. When I consulted my list of Books Read, I found I’d read this in 1974, too long ago to remember specifics, but I do recall the Dick and Ellison stories stood out — as almost everything by both did for me in those days. I’m in the middle of 3 other books right now, but I’m anxious to give this one another go.

John, I found out why I went against my own principles and marked in one of my books: I’d gone to the world con in D.C. in’74, and had taken several books with me. I got Harlan Ellison to sign a Book Club edition of “Dangerous Visions,” and Robert Silverberg to autograph “Born with the Dead.” And I found a file card note to myself in back of “Dark Stars” that I’d put an asterisk by those titles because another fan attending the con that I befriended had seen me with a copy of that and had found one for himself in the Hucksters’ Room, and we’d promised to write each other with our impressions of what we’d read. I’d completely forgotten the whole incident — probably because that fan never responded to the letter I’d mailed him, as a note to myself on the back of the file card indicated.

This is one of the first anthologies I read. It was followed by his “Alpha” series for several years. Fun fact: the Poul Anderson story here is misspelled, as it frequently is; the correct title is “Journeys End,” as in all journeys end, not a particular journey’s end.