The Coming Storm (March 2016) and The Eleven Lights (April 2018), published by Chaosium

We live in a Golden Age of board gaming, and if you’re in the market for a fantasy game, you literally have thousands to choose from. Mind you, that wasn’t the case 40 years ago. In fact, if you were looking for a serious fantasy-based pastime in those days, there were literally only a few games in town: SPI’s War of the Ring (1977), TSR’s Divine Right (1979), and Chaosium’s Dragon Pass (1981).

In terms of gaming history, there’s little question that by far the most important of those was Dragon Pass. It was originally developed in 1975 by Greg Stafford, and published under the name White Bear and Red Moon. Stafford decided to form a company to produce and market it; inspired by the nearby Oakland Coliseum, he called his new enterprise ‘Chaosium.’ Stafford sold White Bear and Red Moon, and its sequel Nomad Gods, in ziplock bags out of his house in Oakland. Chaosium grew rapidly, and in less than ten years was one of the most important publishers in the industry. If it weren’t for the early success of White Bear and Red Moon and its sequels, we wouldn’t have  RuneQuest, Thieves World, and Call of Cthulhu, just to name a few.

The setting for White Bear and Red Moon, a Bronze Age world rich with human and nonhuman gods, cults, clans and mythology, was Glorantha. Today Glorantha is one of the most important settings in modern fantasy, home of numerous role playing campaigns, board games, novels and stories, and even a popular computer game, King of Dragon Pass. There are many reasons for its popularity and longevity, of course, but personally I believe Dragon Pass — the game that introduced Glorantha to the world — deserves much of the credit. If you’ve spent hours staring at the colorful map of Glorantha, moving your outnumbered clans across the rugged terrain of Sartar, through the Skull Ruins and towards a desperate battle in Snakepipe Hollow, the chance to visit those iconic settings in a role playing environment is just too irresistible.

A few years ago Chaosium released an epic two-part campaign set in Glorantha that explores much of the history and rising tensions that eventually exploded into the Hero Wars: The Coming Storm and The Eleven Lights, which together comprise the Red Cow Campaign. I recently purchased both books, and have really been enjoying this chance to revisit the colorful and dynamic setting where I spent so much time in my youth. 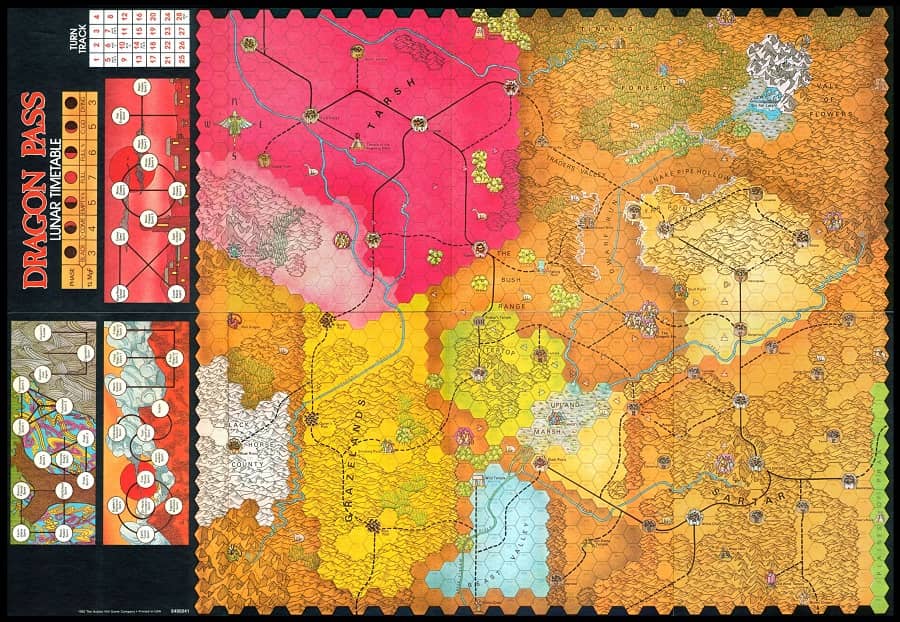 If you’re not familiar with the 45-year history of Glorantha, it can be a little intimidating to wade right in. But if you’re looking for a terrific — and very different — campaign to try with your players, or even if you’re just interested in learning what all the fuss is about, this is a great place to start.

What is the Red Cow Campaign, and why is it different from the RPG campaigns you’re probably used to?

There are lots of things I could highlight, but I think the most important one is tone. The focus of the Red Cow Campaign isn’t on the usual loot-and-scoot mechanics, steadily leveling up until your characters are powerful enough to delve into deeper dungeons and enrich themselves. Far from it.

Players take the roles of members of the Red Cow clan in Sartar, surrounded by their enemies. Their lands are occupied by the oppressive Lunar Empire. To the south the hostile Culbrea tribe prepare for invasion; to the north the treacherous Dinacoli sharpen their knives for vengeance. To the east is the greatest threat: a tribe of werewolves led by a new and terrifying leader who calls for slaughter. The clan desperately needs salvation, and it’s up to you to deliver it.

Dragon Pass boxed editions: Chaosium (1981), and front and back cover of the 1983 Avalon Hill edition

White Bear and Red Moon was renamed Dragon Pass and re-released by Chaosium in a boxed edition in 1981, and reprinted by Avalon Hill in 1983. RuneQuest, created by Steve Perrin and others and set in Stafford’s world of Glorantha, was released by Chaosium in 1978 and gradually became one of the most successful role playing games of the 20th Century. In the process it helped popularize and promote Glorantha to hundreds of thousands of gamers and readers around the globe.

When Chaosium entered the overcrowded card game market in 1998, they essentially bet the future of their company on a make-or-break game: Mythos. When it failed it nearly destroyed the company, and Chaosium was broken up. Greg Stafford left to found Issaries, Inc., to produce products set in Glorantha; one of the first was the HeroQuest RPG, written with Robin D. Laws. Since 2015 Chaosium has been supporting the game with ambitious and well written HeroQuest Glorantha products, such as this one.

That’s all well and good, but I don’t generally shell out for a pair of $30 hardcovers, just because I’m fond of its four decades-old setting. There’s a lot I find compelling about the Red Cow Campaign all on its own. 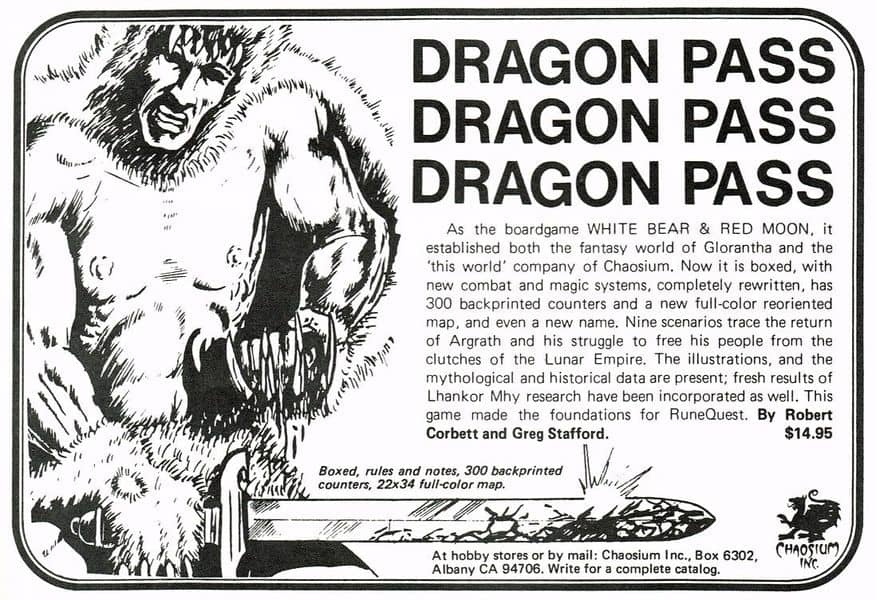 Let’s start with this description of the campaign, taken from Chapter One of The Coming Storm.

A HeroQuest Glorantha game follows the logic of the narrative source it emulates. The first genre The Coming Source emulates is that of the Icelandic Sagas such as Njals Saga and Laxdaela Saga where heroism happens in the ordinary toil of daily life, feuds last for generations, and life is short and uncertain…

The second genre The Coming Storm emulates is Sword and Sorcery. This is a tale of swashbuckling PCs risking all in the face of danger. There are proud barbarians and a decadent and decaying empire. There are primitive savages and sinister remnants of fallen civilizations. There are dark ruins and fabulous treasures to be won by the bold. Magic is common, but often individual. However, the stakes in the stories are personal triumph or loss not the world-spanning threats of epic fantasy. If the PCs fail, their families, kin. and loved ones may suffer, but the failure will not change the world.

While the Red Cow Campaign has a vastly different focus from most RPG campaigns I’m familiar with, it still punches most of the same buttons that first got me interested in role playing — including an imaginative setting with danger lurking around every corner.

Back covers for The Coming Storm and The Eleven Lights

The Coming Storm is the setting guide for the epic campaign laid out in The Eleven Lights. It provides all the details players and the Game Master need to develop exciting adventures with the Red Cow clan in Sartar, including:

The Coming Storm is a great resource for players and GMs alike.

Unlike the first volume, The Eleven Lights is intended for use by Game Masters only, as it contains the details of the Red Cow adventures, including:

Taken together, these volumes create an exciting and uniquely crafted adventure that will keep players (and GMs) talking and excitedly sharing stories for years.

Pavis – Gateway to Adventure: The Classic RPG City is Back! (Part One) by Sarah Newton
Pavis – Gateway to Adventure: The Classic RPG City is Back! (Part Two) by Sarah Newton
The Guide to Glorantha Kickstarter by Sarah Newton
Monster Island by Pete Nash & Friends
The Other Appendix N by James Maliszewski
Monster Island by Howard Andrew Jones
Appendix N: Carrying on the Flame by Pete Nash
Choice of the Petal Throne by James Maliszewski
RuneQuest 6 by Pete Nash and Lawrence Whitaker
RuneQuest: Korantia and Mythic Britain by Howard Andrew Jones
Chaosium’s Borderlands: Can Playing RPGs Really Make You a Billionaire?
Chaosium Announces New Version of RuneQuest
The Complete Borderlands Campaign now Available in PDF from Chaosium
Resurrecting RuneQuest: An Investigation by the Tales of the Reaching Moon Editorial Staff by Michael O’Brien
Numenera, Nyarlathotep, and Runequest Glorantha: Some Recent Slipcase Sets
Cults of Prax: Then and Now by Michael O’Brien

These books make great additions to my growing Chaosium collection. In fact, my only real complaint about them (like the recent Pavis reissue from Moon Design, and others), is that they make me yearn for the days when these kinds of adventures would be packaged as box sets. The Red Cow campaign would have made a worthy addition to my Chaosium box library. 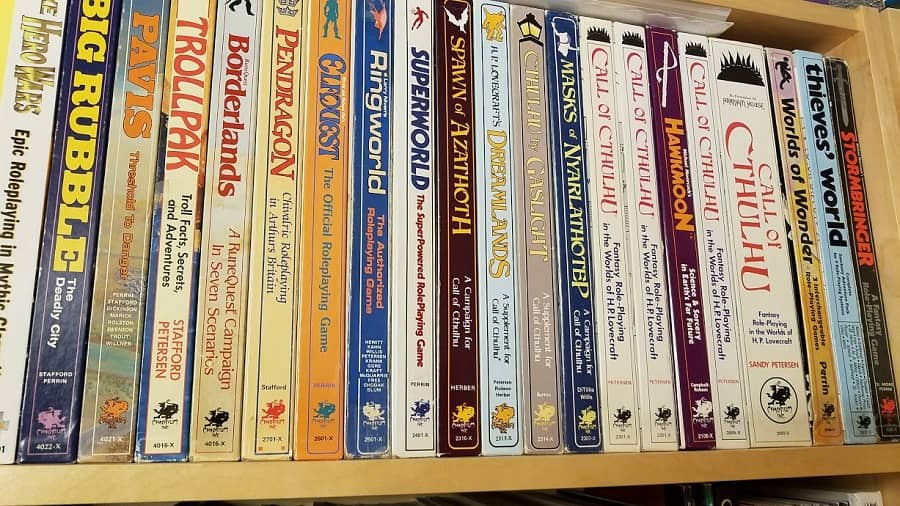 An assortment of Chaosium boxed sets from the 80s

Great news for those with a little spare change — both The Coming Storm and The Eleven Lights are part of the big ‘Stay at Home’ sale Chaosium has at the moment, and the hardcover editions are dramatically reduced:

See their complete line of HeroQuest products (many discounted) here, and see the complete Spring Cleaning Sale — some three dozen titles, including board games like Khan of Khans, classic Call of Cthulhu adventures and supplements like The Stars Are Right, Secrets of Morocco, Arkham Now, and Alone Against the Flames, and Basic Roleplaying Supplements like Devils Gulch and Blood Tide — here. 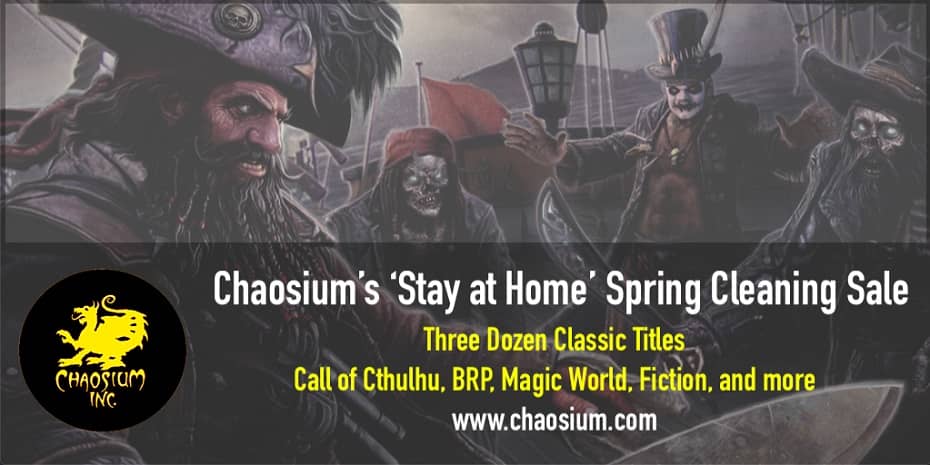 Thanks. The joy/trouble is that the old Dragon Pass map is so much cooler than any of the newer products. Which is not to say that the new work is poor; merely that the work of the original Chaosium was so charismatic.

I know exactly what you mean. That original map for Dragon Pass is packed with detail, and place names that are evocative of adventure: The Temple of the Reaching Moon, Smoking Ruin, Tarsh, Traders Valley, Stinking Forest, Vale of Flowers, Stagwood, Wasp Nest, The Dragon’s Eye. It fired the imagination of everyone who played it.

I don’t think that map gets the credit it deserves for igniting a deep interest in the world of Glorantha among thousands of gamers in the 80s.

It exerted a pull even in the black and white form; I first visited Dragon Pass in 01/76 when I received a copy of White Bear & Red Moon as a birthday present. It has had a grip on my imagination ever since.

Agree with your opinion of The Coming Storm and The Eleven Lights; very fine and I would love to see that material available in a traditional box set.

I went to pull out my copy of WHITE BEAR AND RED MOON to photograph for this article…. and it’s missing! NOMAD GODS, LORDS OF THE MIDDLE SEA, KING ARTHUR’S KNIGHTS, and RAIDERS AND TRADERS are all right there on the shelf where they should be with mid-70s Chaosium releases, but that one’s missing.

I’m sure it’ll turn up eventually. I hope so… I’d hate to have to buy a replacement copy these days!

Missing? Sheesh, I don’t even want to think about how much a replacement would cost!

Hope you find that lost treasure undamaged and soon.

WHITE BEAR AND RED MOON was one of the first things I tracked down when I started using eBay in 1998. If I recall correctly, it cost me about $120 for a mint condition, unplayed copy,

The cheapest copy I can find on eBay today in that shape is $995, for an unplayed coopy autographed by Greg Stafford. Punched copies for for around $225. So yeah, I hope I can find my copy too. 🙂

One piece of advice I got early was to find copies of the French edition of both WHITE EEAR and NOMAD GODS, since they were inexpensive and you could use the gorgeous maps if you had an English copy of the rules. So I did, and it was great advice. Those editions are harder to get today as well.

[…] The Black Gate, a long running online fantasy magazine, has an article about the excellent HeroQuest campaign books The Coming Storm and The Eleven Lights. […]