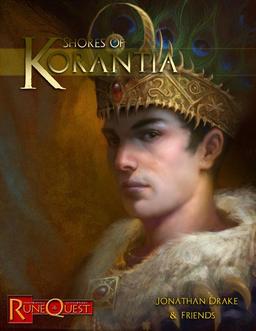 In 2013 I wandered over to Monster Island, one of the first journeys I’d ever made to a RuneQuest destination. I found it excellent. And recently, after I returned from GenCon2015, I  travelled once more into RuneQuest realms and learned that excellence is a standard practice in their products.

Shores of Korantia is a setting book for a bronze-age land rich in intrigue and adventure. It covers the regions of the empire in detail that’s thorough but not dry — not so much an encyclopedia entry, but a travel guide with adventure hooks, so that every page you turn sets your mind ablaze with ideas to spin adventures from. Like Monster Island before it, one doesn’t have to be at all familiar with RuneQuest in order to utilize the setting, or even a gamer to enjoy reading it. If you like reading about imaginary worlds, any of the RuneQuest Design Mechanism books I’ve read are a great time.

Korantia is a tottering empire propped up by a noble young ruler that you just can’t help but find yourself rooting for, which is pretty typical of what writer Jonathan Drake manages throughout the book — the people detailed are engaging, their situations interesting. In short, it’s chock full of the potential for story. There are fascinating places to go, engaging people to meet, and mysteries to unravel. 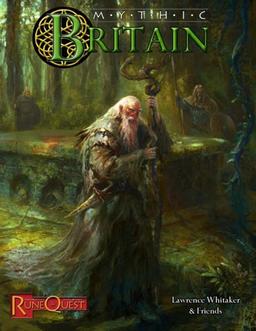 In addition to the compelling setting, Shores of Korantia has three adventures — a mini-campaign, actually, with the potential for even more, for one of the scenarios is presented in a sandbox style setting. The book’s rounded out with some expanded rules for naval combat, encounter tables, character creation and other cool and necessary tidbits.

Like Shores of Korantia, Mythic Britain is a gorgeous book, with outstanding production values. I’m not an old enough hand at RuneQuest to know if this is standard or not, but well organized layout, logical flow, and great exterior and interior art is standard in every RuneQuest product I’ve seen from Design Mechanism.

Mythic Britain describes the England of the Arthurian era, when the Romans have but recently departed and different regions of the island fight both to rule it and to repel invaders. I’m by no means an Arthurian expert, but I’ve read my fair share of Arthurian settings. The typical problem with them is that the famous characters are so fascinating that it’s easy to lose sight that there needs to be room for player characters to adventure and make a difference.

Writer Lawrence Whitaker understands that, and has carefully crafted a series of interlinked scenarios that gives characters the opportunity to interact with heroes from myth and legend, to affect the course of history, and to participate in grand events. In this setting Arthur is just a young leader, England fragmented, Guenevere unmarried, the round table not even a dream. Honestly, I’ve thought about running an Arthurian campaign in the past but I’ve never understood how I could go about it successfully before. 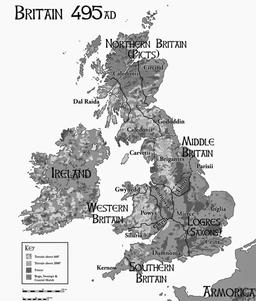 Those who want to run adventures in ye olde lands can find setting information laying it all out in thorough detail that’s never dull — something that, like the high quality art, must be a standard feature of Design Mechanism products, because I’ve found the same true in Monster Island, Shores of Korantia, and Mythic Britain.

History buff that I am, until I read Mythic Britain I’d still never had a good understanding of how 5th and 6th century England was divided. Whitaker either did a great deal of research or did a little research and brilliantly faked a lot. Either way, it’s just a blast to read.

This being a game book, it’s naturally loaded with character creation rules and other tidbits, like how magic and religion differ in this setting, mass combat rules, and the like.

Shores of Korantia is 233 pages and Mythic Britain comes in at 366 pages. Both products are available as both stunning hardbacks and PDFs, which are easy to find at sites like RPGNow. If you’re curious about hardbacks, though, they can be ordered through Paizo or Amazon.

Ah, Runequest. I played some in the late 80s and early 90s. It was so… British. The whole bronze-age thing was kind of lost on us. Ironic, considering how much energy I’ve spent researching and writing bronze-age fantasy stories. I also remember that it was very easy to be utterly incompetent with whatever weapons you we retrying to use (not as bad as Star Frontiers, but still).

I hung up the spurs on gaming long ago, but sometimes it is tempting to delve back in. So very tempting! Especially if I my character can have a stone ax carved with faux casting-seams so that it looks like a bronze ax.

Can we perhaps tempt you again, with a free to download demo version of the latest version of RQ? Pop over to http://www.thedesignmechanism.com/downloads.php and grab a copy of Essentials for a bit of nostalgic fun!

Its strange to hear you say RuneQuest in the eighties felt so British, written as it was by a group of Americans – Steve Perrin, Ray Turney, Warren James, Steve Henderson and of course Greg Stafford who added the setting of pseudo-bronze age world of Glorantha to the rules.