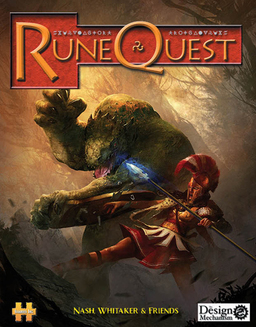 As recently posted here at Black Gate by James Maliszewski in his article “The Other Appendix N,” the very first Appendix N bibliography of inspirational reading ever printed in a roleplaying game was actually in the 1978 edition of Chaosium’s RuneQuest; a year before Gygax released his own homage in the AD&D Dungeon Masters Guide. Whilst it merely followed the time honored convention of academic publications, few remember nowadays that it was RuneQuest which started an institution in roleplaying that still continues to this day.

Surprisingly, the differences between the two bibliographies are quite stark. RuneQuest’s list, rather scholarly, incorporated a lot of ancient history texts, books of military warfare, and Nordic sagas; whereas AD&D’s was more devoted to fantastical fiction, especially the less well-known authors of the genre. Central to both bibliographies, however, are some familiar names: Robert E. Howard, Fritz Leiber, Michael Moorcock, Clark Ashton Smith, and JRR Tolkien. Other than that, there was little overlap between the two.

Whilst these recommended reading lists reveal each game’s designers’ interests and objectives, it also highlighted that every writer is heavily influenced by the literature they read, and by implication, those stories available to them at the time.

For Gary Gygax, a man turned forty by the time he wrote the Dungeon Masters Guide, the early works of fantasy authors such as Poul Anderson, Leigh Brackett, Fox Gardner, Andre Norton, Jack Vance, and Roger Zelazny were readily available in bookshops, hot off the press. Indeed, almost all of the books on his inspirational reading list would have been as easy to pick up as purchasing a copy of A Game of Thrones is today.

Although the combined authors of RuneQuest were less than a decade younger, their drier bibliography somehow never matched the mystique of Gygax’s subsequent list, despite the fact that the game itself gripped my imagination with a far tighter hold. This fascination was more due to the Classical style of its illustrations combined with Greg Stafford’s wondrously magical world of Glorantha, with its roots firmly grounded in diverse mythologies – alas, unlisted in the first Appendix N.

When Lawrence Whitaker and I set about refining and re-launching RuneQuest as a quality roleplaying game, we too were influenced by our own youthful reading.