The RuneQuest supplement Cults of Prax was published by Chaosium forty years ago this year.

RPGNet describes Cults of Prax as the first-ever roleplaying game ‘splatbook’ (a ‘splatbook’ being a non-core sourcebook for an RPG that provides additional rules and material that can be used with the main system) — but its importance and influence goes far beyond that distinction. In a 2010 retrospective review Grognardia said Cults of Prax is

A true classic of the early days of the [tabletop roleplaying] hobby. …quite rightly considered one of the best treatments of religion in a fantasy RPG ever written and it’s certainly one of the most inspirational.

Written by gaming legends Steve Perrin, co-author of the RuneQuest RPG rules, and the late Greg Stafford, creator of the fantasy setting Glorantha, Cults of Prax’s ground-breaking presentation of gods and how they interact with the world through those who worship them still makes it one of the most influential and important works ever released for the RuneQuest RPG, and indeed for tabletop roleplaying games in general.

In Glorantha, the setting world for RuneQuest, the gods are real, and magic works because relations between the spiritual and physical plane are immediate and concrete. Cults of Prax describes fifteen Gloranthan gods and their cults. RuneQuest player characters can interact with these cults or even join them, progressing through the ranks of lay member, initiate, rune priest/priestess, and eventually, with luck and their god’s blessing, rune lord/lady. The cults depicted range from primitive ancestor worship, to tribal deities worshipped by nomad barbarians, through to intricate civilized religions with specialised gods of war, trade, knowledge, and healing. The book also includes three non-human religions, and a guidelines chapter for designing new RuneQuest cults of your own.

Another innovative feature of Cults of Prax is the excerpts from The Travels of Biturian Varosh running through the text. This narrative, featuring a wandering merchant trader encountering worshippers of each of the fifteen cults in the book, helps bring the Gloranthan setting alive, and offers readers imaginative springboards for RuneQuest roleplaying encounters and adventures. 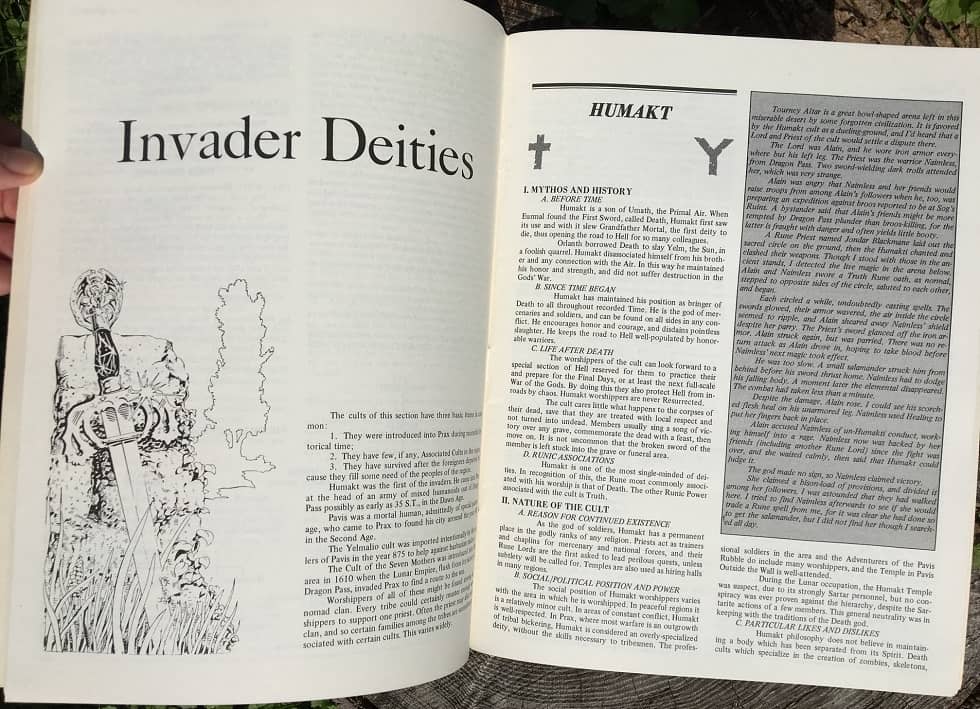 The Invader Deities chapter of Cults of Prax (1979), with The Travels of Biturian Varosh sidebar

By contrast, Grognardia notes that the Dungeons & Dragons supplement Deities and Demigods, which was released about the same time,

managed to reduce real world religious/mythological figures to mere game constructs; Cults of Prax does the opposite, elevating game constructs to something approaching credible, if clearly fantastical, belief systems.

Cults of Prax was re-released in PDF as part of the RuneQuest Classics line in early 2017. Reviewers and RuneQuest fans continue to mark its importance to the roleplaying genre.

Arguably the most important supplement ever for both Glorantha and RuneQuest (because it) brought both function and form to faith, and in doing so, it made faith both playable and something that you wanted to play. 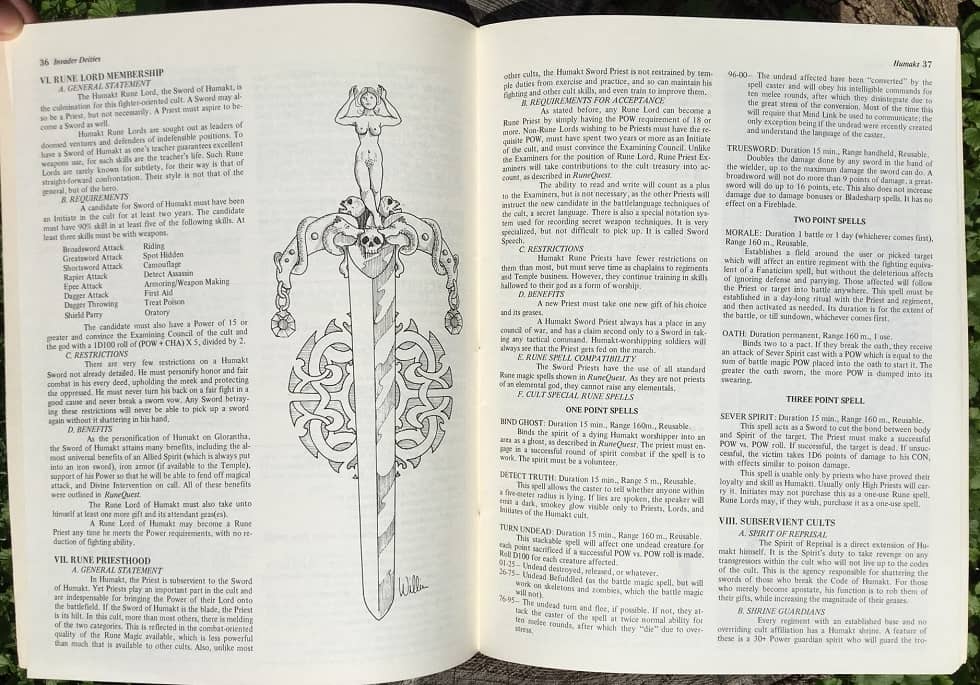 Reviews from R’lyeh also notes what reviewers at the time of Cults of Prax’s original release (1979) thought of it:

“I cannot rate this book too highly, it makes an already excellent, imaginative, and highly playable FRP system into a masterpiece that richly deserves a place at the forefront of the hobby. 10/10.”—White Dwarf #23

“The best extant cosmology designed for use with any FRP that has been published.”—Different Worlds #7

“If you play RuneQuest, you want this book. If you are a serious Game Master in any fantasy system, you would do well to look it over… And remember: gods don’t have to be effective to be important. Belief is the thing, and the interactions of social groups and differing beliefs in Cults of Prax is good fantasy reading if you don’t game at all.”— Steve Jackson, Space Gamer #27.

Such opinions have withstood the test of time and an evolving generation of RPGs and their players. 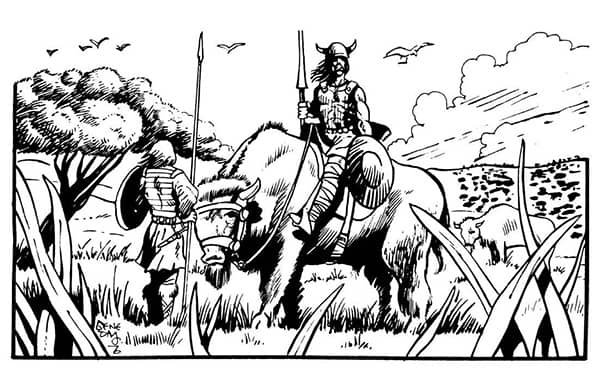 The RPG historian Shannon Appelcline (Designers and Dragons) recently agreed that Cults of Prax was “a vastly innovative product, one of the best looks at religion ever in an RPG (still)”.

On the Glorantha Fans Facebook page, Cults of Prax was literally game-changing for one commenter, who said ““I read it for the first time, only having played AD&D, and had an ‘I didn’t think you could do that’ moment.” Andrew Logan Montgomery of the Exploring the Otherworlds of Fiction, Magic, and Gaming blog concurs, stating

Cults of Prax was extraordinary. It not only defined what Glorantha was, it demonstrated what was possible in gaming. It moved the bar from moving miniatures around a table and rolling dice to a shared novel. The depth. The erudition. Just stunning. 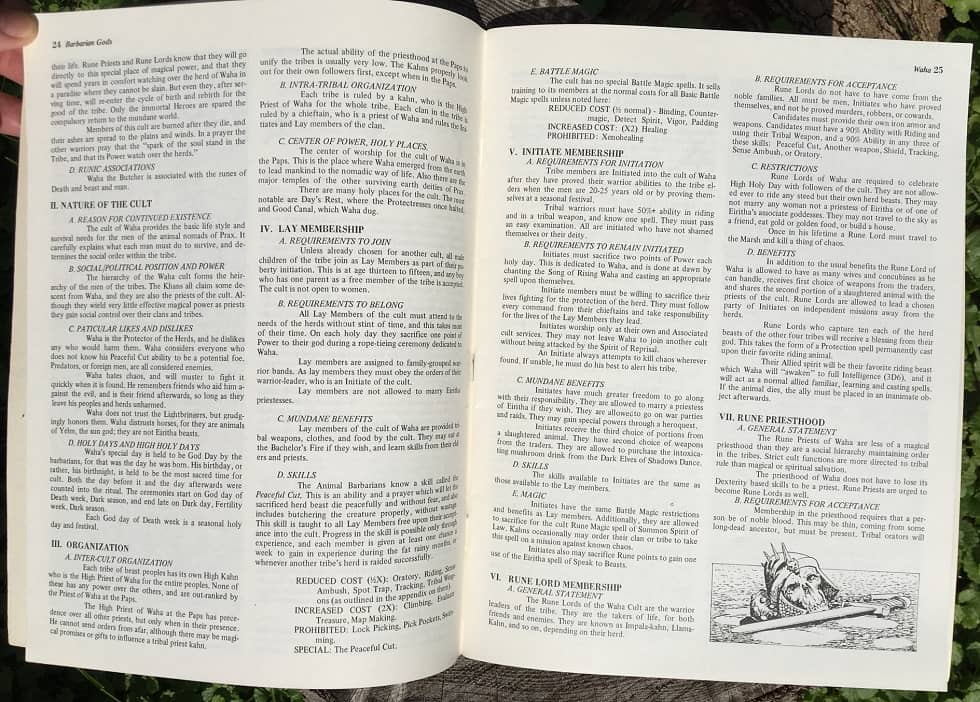 One look at the cover of the book [first printing] told me this game was different. This was game of negotiating cultures, communicating with strange strangers and contending with the unknown… The cover alone was enough to get me to agree to give RuneQuest a chance. Digging into the contents of Cults of Prax I knew I had made the right choice.

In a comprehensive video review (so comprehensive it’s in two parts: part one, part two) Bud’s RPG Review succinctly concludes “This is a book that should simply be treasured by gamers.”

Cults of Prax is available in PDF from Chaosium and from DriveThruRPG. It is easily compatible with the latest edition of RuneQuest: RuneQuest: Roleplaying in Glorantha (RQG). Chaosium is currently working on a new release for RQG entitled Gods of Glorantha, building from Greg Stafford’s original manuscripts compiled over forty years. This work will feature over 100 cults for RuneQuest presented in the time-honored Cults of Prax format.

[Also check out Cults of Prax’s companion volume Cults of Terror (1981), which Ron Edwards of The Forge and Adept Play has said, “is a not merely a landmark in role-playing history, it’s a giant.” It too was rereleased in PDF for RuneQuest Classics and is available from Chaosium and DriveThruRPG.] 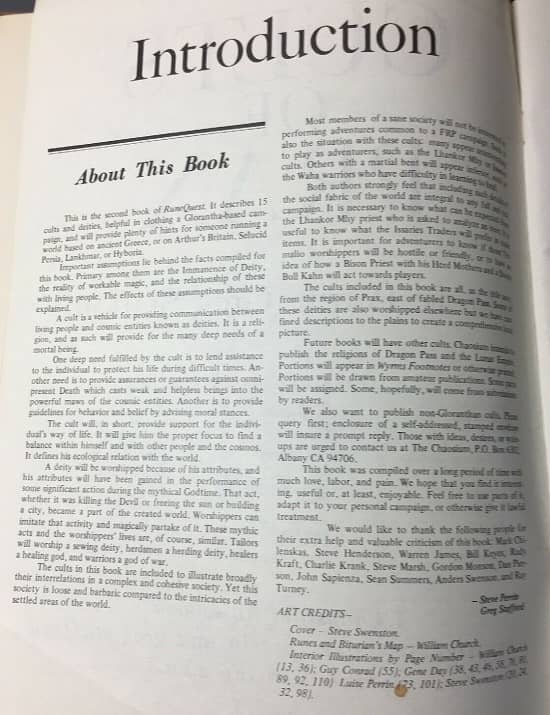 Michael O’Brien became vice president of Chaosium in August 2015. The 1992 RuneQuest-Glorantha release Sun County, which he wrote for Avalon Hill working with editor Ken “The Rune Czar” Rolston, kicked off the relatively brief but creatively fertile period which later became known as the “RQ Renaissance.” Although based in Australia, at the time O’Brien was associate editor of Tales of the Reaching Moon, the influential British fanzine that helped sustain Gloranthan fandom through the 1990s and early 2000s. His last article for Black Gate was Resurrecting RuneQuest: An Investigation by the Tales of the Reaching Moon Editorial Staff.

A seminal work which I have yet to lay hands on in hard copy. Closest I have is Gods of Glorantha and Lords of Terror from Avalon Hill RQ3, both interesting enough children, but not as groundbreaking as what I have read about Culta of Prax over the years. Thanks for the write up Michael.

I started playing RuneQuest in late 1978 after reading an article in The Space Gamer that told of a RPG set in the world of Glorantha. I owned a copy of White Bear/Red Moon, Greg Stafford’s ground breaking board game that introduced Glorantha in 1975, and I wanted to see what Steve Perrin and his friends had come up with.

I liked the game and was able to get more than half a dozen people into a campaign, but it wasn’t until Cults of Prax came out the following year that everything came together and everyone really started enjoying themselves. This book was the turning point.

It wasn’t just that it was a “presentation of gods and how they interact with the world through those who worship them”. It wasn’t just that this book gave color and life to a fascinating world of magic and adventure, it was because it told me and my players WHY.

Why did this world exist? Why did these deities exist and why did their followers react to each other they way they did? Why did they have the powers that their magic manifested in this world?

The possibilities this book opened up grabbed me and my players and dragged us into a roleplaying experience that has yet to be exceeded by any game I have played in any medium in more than 40 years.

To Steve Perrin and the late Greg Stafford: Thanks, Guys.