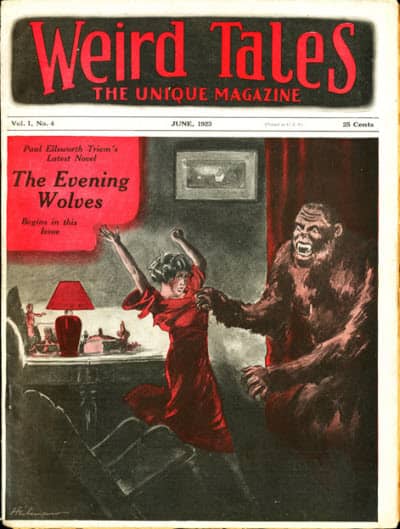 Cover by Heitman for “Murders in the Rue Morgue”

June 1923 was the magazine’s fourth issue, and it was still clearly a magazine in search of itself.

There are very few authors who had a major impact on the magazine appeared in this issue. The most notable name, of course, is Edgar Allen Poe with a reprint of one of his most famous tales (“The Murders in the Rue Morgue”) and, secondarily, Otis Adelbert Kline, with a story largely forgotten today, but which I found to be a cut above many of his others, though ultimately somewhat slight. That’s about it. Two of the best stories were by authors totally forgotten today, Paul Ellsworth Triem and Loual B. Sugarman, with only the later tale having fantastic elements. In fact, only seven of the 18 stories in this issue had fantastic elements (39%), all were set in contemporaneous times (of course, the Poe story was written in the 1840s), and most (13 or 72%) were set in the United States.

On the whole, many of the stories were no better than mediocre, but really poor efforts were largely avoided (four 4’s and one 5). Also largely avoided were the overtly racist tropes too readily present in many early WT’s, with the Birch effort going all in on the Yellow Peril theme.  Overall, this issue rated out to 3.00, which notably lags behind the classic early 1930s issues previously covered. 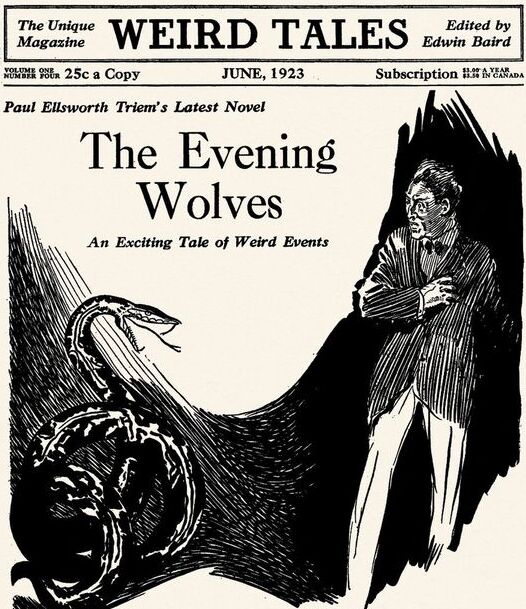 Paul Ellsworth Triem. (-/1) “ The Evening Wolves.” [US, San Francisco; Contemporary] (i/ii) Unusual and well-written story for the time period with a detail of characterization not normally seen. The leader of a gang of thieves called “The Evening Wolves,” makes off with the proceeds of their last caper and seeks the help of the Chinese-American protagonist when the rest of the gang tracks him down. [Private inquiry agent. Chinatown. Chinese-American protagonist. Jewel theft, diamond. Death by exotic animal, python. Death by drowning. Gun fight. Death by gun. Death by trap. Vengeance, righteous.]

Harold Freeman Miners. (-/3) “Desert Madness.” [US, western state; Contemporary] A prospector comes across a young woman chained to a canyon wall and rescues her, only to clash with her insane uncle who is forcing her to marry against her will. [Western tropes. Insanity. Love triangle. Gun battle. Kite flying. Animals, menaced by, rattlesnakes. Death by gun, self defense. Chinese, heroic henchman.] 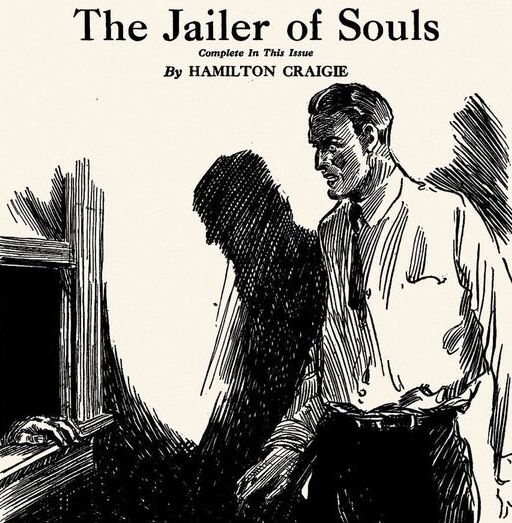 Edwin MacLaren. (-/4) “Jack O’ Mystery.” [US, Chicago suburb, Contemporary] Unconvincing faux haunted house story wherein a woman hires a PI to investigate the house she and her husband just moved into which is purportedly haunted by the ghost of a previous owner who’d murdered his wife. Turns out it’s her husband in a theatrical costume. Why? Who knows? [Haunted house, faux. PI]

Adam Hull Shirk. (4) “Osiris.” [UK, London; Contemporary] An Egyptologist who excavated Osiris’s tomb (and wrongly claims Osiris is often represented as a man with the head of a bull), dies of a heart attack as a bovine-headed apparition appears in his room. [Death, by fright. Egyptologist. Ancient Egyptian themes.]

Julian Kilman. (-/3) “The Well.” [US, rural; Contemporary] A man beats another man to death over a boundary dispute and tosses his body into an abandoned well. He slowly goes mad and ultimately leaps into the well killing himself. [Death, by beating. Murder, beating. Insanity. Suicide, drowning.] 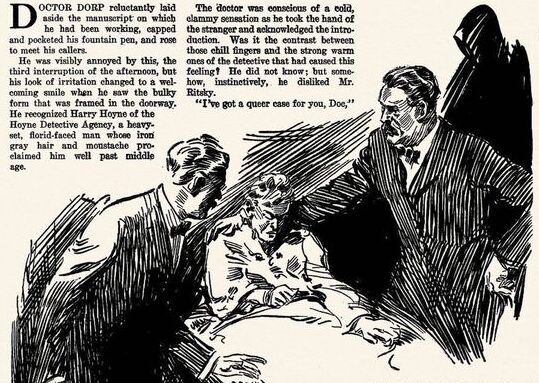 Otis Adelbert Kline. (2) “The Phantom Wolfhound.” [US, Chicago; Contemporary] A man kills the beloved dog of his ward, and is haunted by the dog’s ghost, which turns out to be an ectoplasmic (called “psychoplasm” in story) emanation coming from the girl, whom he is slowly poisoning so he can cop her fortune. [Private investigator. Psychic detective. Scientist, psychologist. Murder, attempted, poison. Inheritance scheme. Death, by fright. Ectoplasm.]

A. G. Birch. (4) “The Moon Terror.” [ US/Canada west coast; Contemporary] (ii/ii) Wireless messages from an unknown source are a prelude to worldwide earthquakes threatening to tear apart the Earth are revealed to be from a fanatical sect of Chinese “sorcerers” (constantly called that though they never employ magic) which seeks to bring about the return of the “two moons,” (stated to have at one time actually existed) by shooting off part of the Earth into the sky. [SF. History, faux. Human sacrifice. Gun battles. Death, multiple, from gunfire. Earthquake machine, hydro-electrically powered. Yellow Peril racism. Tidal waves. Earthquakes. Scientist, multi-disciplinary.]

Walter Noble Burns. (4) “The Man the Law Forgot.” [US urban, Contemporary] A man is executed for killing a man during a robbery, but doctors somehow bring him back to life after he’s legally declared dead. He shoots the man who led him into a life of crime, but the judge refuses to try him as he’s legally dead. Interesting set-up thrown away as for the rest of the story everyone acts like an idiot and ultimately the “legally dead man” is shot by the new boyfriend of the girl he loves who no longer loves him because, well, he’s dead. [RFD, by medical means. Revenge, righteous if excessive. Love triangle. Death, by gun.] 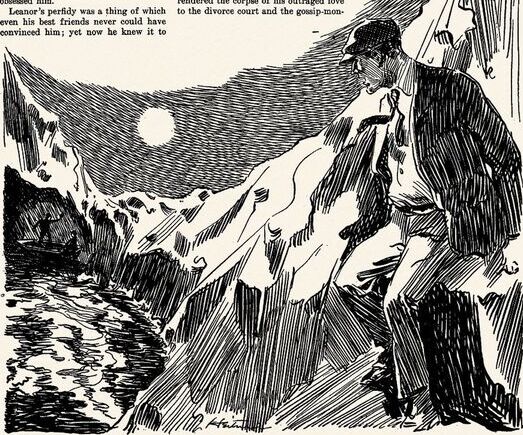 Warburton, George Lewis. (-/5) “The Blade of Vengeance.” [Panama, Contemporary] Incredibly prolix tale about a man getting revenge on his “adventuress” wife who’d taken him to the cleaners when he divorced her. It not only strains credulity, it hangs it from the neck until it’s dead. [Battle of the sexes. Vengeance, righteous if excessive. Murder, by knife] 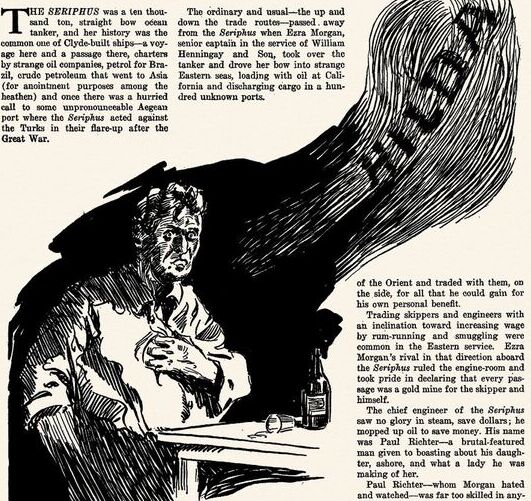 Henry Leverage. (-/3) “The Voice in the Fog.” [Pacific Ocean, Contemporary] A ship’s officer on a tanker cold-cocks his daughter’s lover and sticks him in an auxiliary boiler in an attempts to kill him. He escapes off-stage and in a very unlikely turn of events is later picked up by the ship when another vessel he’s on sinks. When he’s recognized by his potential father-in-law, he asks to marry his daughter and in another unlikely turn of events, the father agrees. [Nautical themes. Murder, attempted, parboiling]

Hugh Thomason.(3) “The Invisible Terror.” [US western state, Contemporary] A cowboy comes upon a mangled body surrounded by dog-like tracks. It’s an invisible beast that the sheriff sprays with whitewash and then shotguns. Not a bad idea, indifferently handled. [Death, by animal, invisible. Western tropes]

Tarleton Collier. (2) “The Siren.” [US wilderness, Contemporary,] A “siren,” (actually, more like a nymph) seduces a man into drinking typhus-infested water, making him ill unto death. [Nymph, malignant. Disease, killer]

Herbert Hipwell. (-/3) “The Madman.” [US?, Contemporary] A man kills his wife, possibly accidentally, then is so afraid he’ll blab about it that he refuses to have a needed operation, fearful that he’ll confess while under anesthesia. Ultimately forced into the operation, then kills himself because he thinks that he talked. [Insanity, Suicide, strangulation]

Dr. Harry E. Mereness. (-/3) “The Chair.” [US, Contemporary] Purportedly a detailed description of an execution by electric chair from the doctor assigned to supervise it. [Death by execution, electrocution.] [This doctor supposedly oversaw more electrocutions at Sing Sing than any other man, but I googled the name and he didn’t exist – though a prominent obstetrician named Henry E. Mereness passed away in Albany, NY, in 1920.]