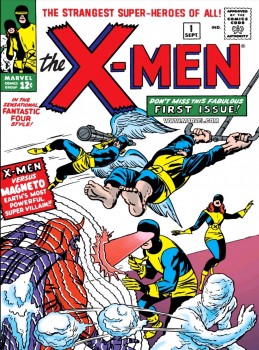 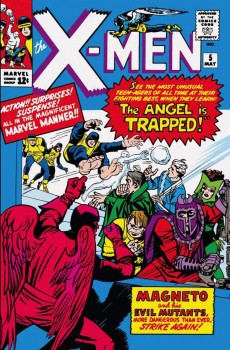 Maybe this reread can go all the way to now? I don’t know. There’s a lot of X-Men. A. Lot. Of. X-Men. And it’s twisted up worse than 50 years of Days of Our Lives. So convoluted that Marvel let Ed Piskor write and draw X-Men The Grand Design, which is a non-canonical reconciliation of all the contradictions in their history. I blogged about it here.

NOTE: Other posts in this series are:

YouTuber ComicBookGirl19 did an absolutely amazing 3-part, 4-hour series on the X-Men history. The one on the 60s era is here. Check it out. She has a robot sidekick. 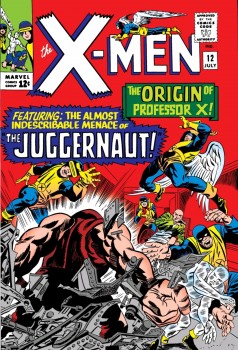 What’s my entry point to the X-Men? One of my first comic books was Uncanny X-Men #128. I collected forward and back from that issue. I was able to get a lot of Bronze Age issues or reprints, but the Silver Age X-Men were a mysterious, lost-in-the-mists of time thing for me.

I could sometimes get them in reprints, but other than that, I could only imagine those stories alluded to in the Uncanny X-Men, a bit like what the First Age felt like to hobbits — something talked about, but perhaps not exactly real. 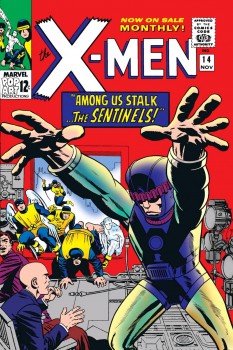 What did I think of this last reread? It’s neat and a bit disorienting seeing Stan Lee and Jack Kirby getting their feet under them on this idea. In the first few issues, Beast speaks like a bar room brawler, and everyone has feelings for Jean Grey (which I guess is kind of a series constant), and Magneto hasn’t yet come into focus. He fights the X-Men to a draw in the first issue by pushing a trailer of fuel at them. 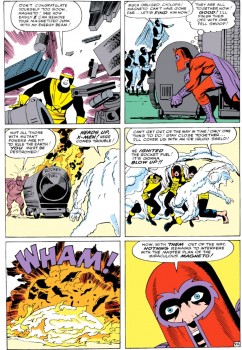 Kirby is also experimenting with the visual voice of the series, like seeing different depictions of Cyclops’ optic blasts, toying with Magneto’s physique and costume, and the Beast’s appearance.

They’re all little points compared to the conception of the series though. The Homo Superior and Homo Sapiens debate occurs in the earliest parts of the narrative, and the structure of the school, the training are there. Other evil villains, Blob and Vanisher, start to fill in the world of Marvel’s mutants. 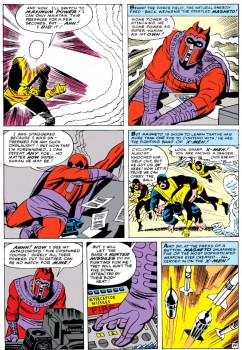 Magneto is one of the early and constant reasons for the X-Men’s longevity. In issues 4-8, he assembles the Brotherhood of Evil Mutants and considers new members, all of whom challenge the X-Men in Magneto’s goals of asserting Homo Superior supremacy over humanity. 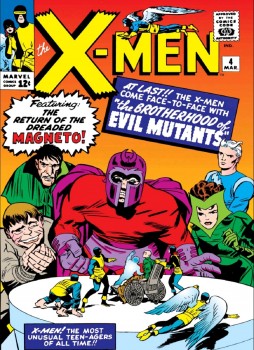 The introduction of the Scarlet Witch and Quicksilver as villains is probably one of the most important developments. They would go on to lead the way for a bunch of villains to redeem themselves as heroes in the Avengers, like Black Widow, Hawkeye. The Brotherhood is a lot of fun and is an overt foil for the competing philosophies of Professor X and Magneto, and of course the teenage melodrama. 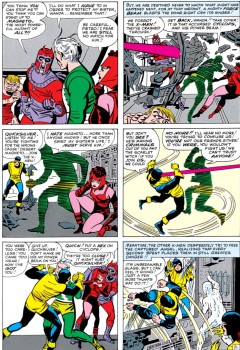 I was only recently reminded that the oldest character in the Marvel Universe is Ka-Zar, who appeared in Martin Goodman’s prose pulps in 1934, five years before his Timely Comics introduced its superheroes to the world. Ka-Zar also appears in the early X-Men, and the introduction of the Savage Land draws on old pulp traditions featured in Burroughs’ Pellicudar and Verne’s Journey to the Center of the Earth. The Savage Land is very Kirby though. 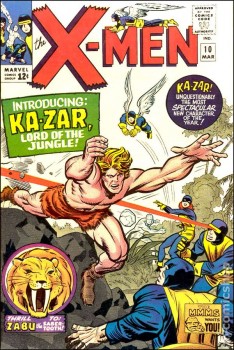 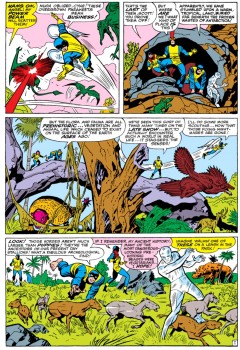 Two more major parts of the X-Men cast get introduced next: Charles Xavier’s step-brother Marco Cain, the Juggernaut, and the mutant-hunting Sentinels, invented by Bolivar Trask. 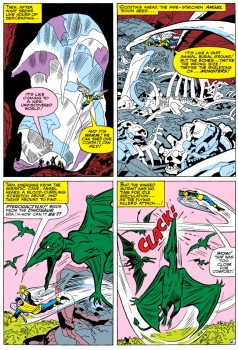 Juggernaut will be a powerful family conflict for the rest of the series, and the Sentinels will be a terrifying, mechanical expression of bigotry, persecution and attempted genocide. 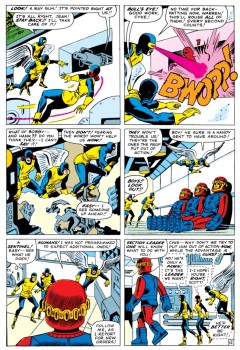 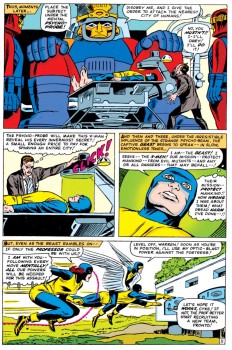 Issues 15-20 felt less consequential to me. Magneto reappears, but seemed to be phoning in a moustache-twirling super-villainous plot rather than playing to what makes him such a compelling antagonist. Likewise, we meet Lucifer and the Mimic, neither of whom score any serious dramatic hits.

Part of this is the experimentation of the Silver Age. I doubt many people yet knew what the secret to Marvel’s success was outside of Spider-Man and Fantastic Four. The rest of the line was constant trial and error with some big important stories (Magneto, Brotherhood, Sentinels) and some that were forgettable. 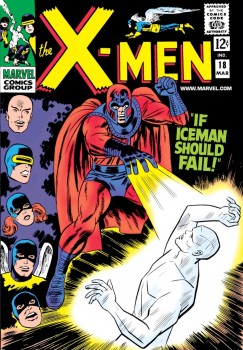 I don’t get the sense that the dip in story excitement was because of the new creative team. Stan Lee co-plotted and dialogued the first 19 issues before handing off the baton to Roy Thomas in issue #20, in what is some of Thomas’ earliest work. Kirby is listed as penciller for issues 1-17, but Alex Toth is credited for issue 12 and Werner Roth for 13-29, so I’m assuming that this was one of the situations where Kirby did the layouts.

This was one of the ways that Marvel trained artists to the house style. The change of artists is in most respects an improvement to my mind. I know Kirby is an impressionist, but I don’t often enjoy his draftsmanship. That being said, the artists who followed Kirby were a bit too clean, a bit too safe, a lot like how I feel where I look at Curt Swan’s work from DC. And of course, the pointy end of the art is often the inker, and how they interact with the penciller’s style, and five different inkers worked on the first 20 issues, so the art varies within the house style. 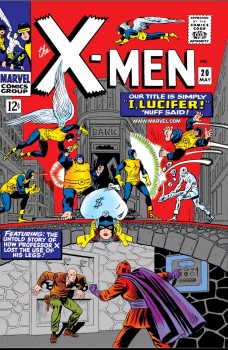 I own the 750-page X-Men Omnibus, which collects issues 1-31. It’s a stunning, keep-it-forever book, but I read these first 20 issues on my Marvel Unlimited account because I was travelling and old comic books are great in airports and on runways. Would I recommend reading this series from the beginning?

I think so, although your mileage may vary. I think there’s a lot of charm and the genesis of many of the key ideas of the X-Men world. It is very 1960s though, with Mad Men levels of sexism in the narrative. If you’re good at compartmentalizing that in your reading of older works, then the early X-Men has a lot to offer. It’s of course corny in many ways, but there’s also a sense that the creators were swinging for the fences, and they hit more than a few home runs.

If you liked this post, stay tuned. In two weeks, I’ll cover X-Men 21-40. If you’d like to join me, let’s nostalgia nerd out together! If you want to catch up on any of my other posts about the X-Men, they’re below:

Derek Künsken writes science fiction in Gatineau, Québec. His second novel, The Quantum Garden, is in bookstores and for sale online everywhere. It is a sequel to The Quantum Magician, which was nominated for the Locus, Aurora and Chinese Nebula Awards. He also writes a webcomic for webtoons.com, called Briarworld. You can find it here.

I love your comics posts Derek.

I’ve spent the past several years going through a Marvel reading order and read most of the silver age.

X-Men was one of those series that i had to skip certain issues. It was just too rough.

In one of those issues even Prof. X has a thing for Jean, thankfully it only shows up that one time.

The first appearance of Juggernaut works the best in these issues. They really pull off the whole build up scene.

Hopefully this lasts long enough to get to the Neal Adams issues. Only by reading what came before can you fully understand how big of a splash his art and panel design made.

I just started reading the Claremont issues for the first time. Maybe they’ll make an X-Men fan out of me.

Thanks Glenn! Yeah, I’m up to issue 30 right now, and am sort of dreading the next post, just because so many from issues 21-42 are miss and hit. I’m looking forward to the Claremont issues (all 18 years of them, maybe?) because those were my adolescence and youth. But I’ve got a ways to go before getting to them 🙂