The Astounding-Analog Reader (Sphere 1972 and 1973). Covers by unknown (left) and Chris Foss (right)

I used to scoff at the idea of online bookstores. How will you browse for books?, I demanded to know. You’ll never replace that wonderful moment of discovery, of serendipity, finding a treasure you weren’t looking for, which happens all the time in great bookstores.

Of course, these days I find books online all the time. I’m a huge fan of Harry Harrison and Brian W. Aldiss’s top-notch science fiction anthologies, like the long-running The Year’s Best SF series and Farewell Fantastic Venus! But I had no idea they’d collaborated on a two-volume collection of Golden Age pulp SF, The Astounding-Analog Reader, until I stumbled on a copy of the second volume on eBay a few weeks ago. I tracked down the first one, ordered both, and have been dipping into them ever since they arrived.

The editors completed the series a year later with The Astounding-Analog Reader, Volume 2 (Doubleday, 1973), which contained stories from 1947-1965. That volume has never had a paperback edition, which makes me sad.

Now, there’s probably no magazine on the planet that’s been read, picked over, and anthologized as much as the Golden Age Astounding. But one thing I appreciate here is that the editors focus on longer stories which haven’t been reprinted as often.

Yes, they include stone cold classics like “Nightfall” by Isaac Asimov, and “City” by Clifford D. Simak. But there’s also five long novellas that you see much more rarely: Ross Rocklynne’s “Time Wants A Skeleton,” (1941), “By His Bootstraps” by Robert A. Heinlein writing as Anson MacDonald (also 1941), “The Push of a Finger” by Alfred Bester (1942), “Clash by Night” by Henry Kuttner and C. L. Moore (1943), and “Giant Killer” by A. Bertram Chandler (1945).

I also enjoy the nostalgic introductions by Aldiss and Harrison, and the lengthy story notes, both of which vividly convey the importance of Astounding to the development of science fiction, and the seemingly never-ending parade of talented newcomers editor John W. Campbell discovered during the Golden Age. Here’s a selection from their intro to the third section.

In each section now, more young giants spring out of the ground!

They are three very different kinds of writer. Like Asimov, Heinlein will always be regarded as an author moulded by ASF, and it is at least arguable that once he was free of the Campbellian mould he tended to sprawl and lose that first fine-honed precision of his. (Asimov’s best novels, on the other hand, appear beyond the pages of ASF — Caves of Steel and The Naked Sun.)

By general consent, “By His Bootstraps'” is the most effective story of time travel after H.G. Wells’s The Time Machine. It is as inward-turned as The Time Machine is outward-looking…. what a piece of ingenuity “Bootstraps” is!

Like Asimov’s, Heinlein’s was a cool fiction. For Kuttner, glamor and excitement came first, and science second or third. His ability to tell a story seem much more natural than theirs. By this date, he was prolific and well known, writing under many names; in “Clash by Night” we can watch the great, the ingenious Kuttner, diving and darting in and out of the mythological seas of his imagination in yet another disguise….

And then there is Alfred Bester’s “The Push of a Finger”! The authors represented so far have been old-timers. the Men who dwell in the Mountains. Bester is one of the modern masters, and it is a surprise to find him appearing so early in the science fictional day… But “Push of a Finger” is a miracle: very Campellian in many ways, and yet entirely Besterish, with all his love of the towering and the just plain damned unlikely (which is nevertheless expertly justified). It is Besterish in its tale of obsessional love, in its gallant battle against the statistics of chance, in its rich humour, and even in its love of a jingle…. And it is Campbellian in the theme of something being hunted down, in the detail of a vast organization, in the secrecy, and the pace being stepped up towards an awful and unexpected revelation.

Here’s the complete intro to the third section of the book, for you completests in the audience. 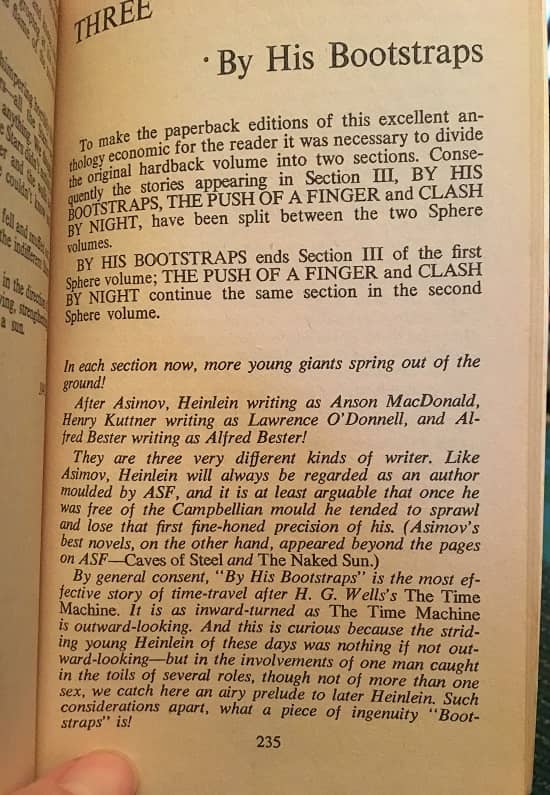 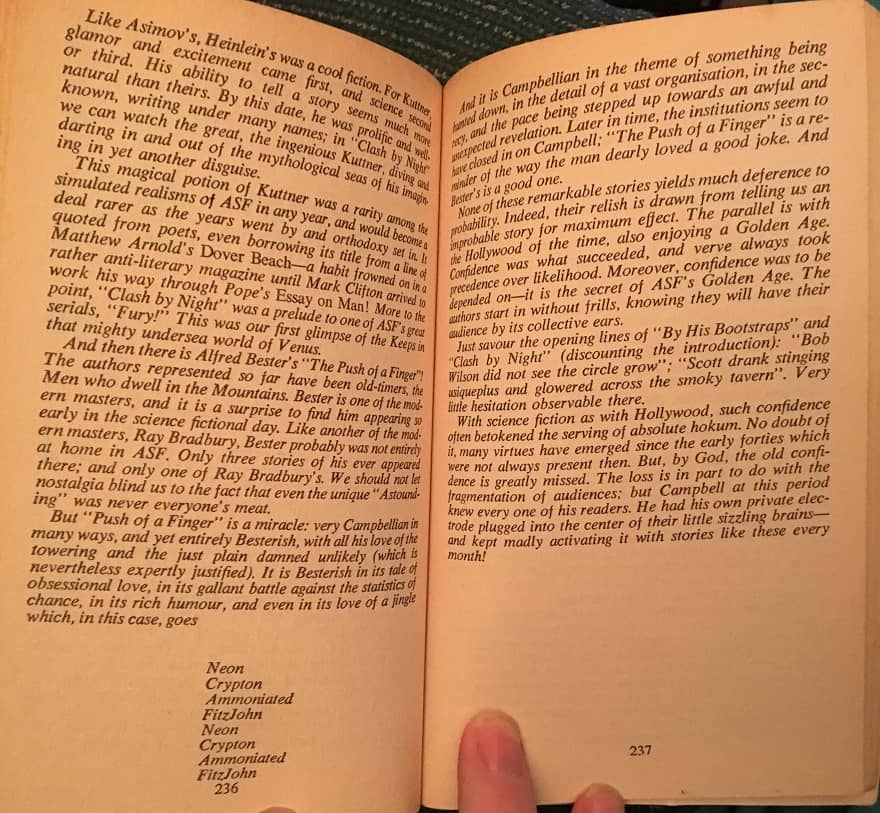 The Sphere editions broke Volume One into two parts, containing seven and eight stories each. Both contained the 9-page introduction and story notes.

Here’s the original magazine covers for two of my favorite tales from the book (click for bigger versions.)

Here’s the complete Table of Contents for The Astounding-Analog Reader, Volume 1, published in hardcover by Doubleday in 1972.

The Doubleday hardcover editions may be a little harder to find than the paperbacks; I don’t have a copy of them, anyway. 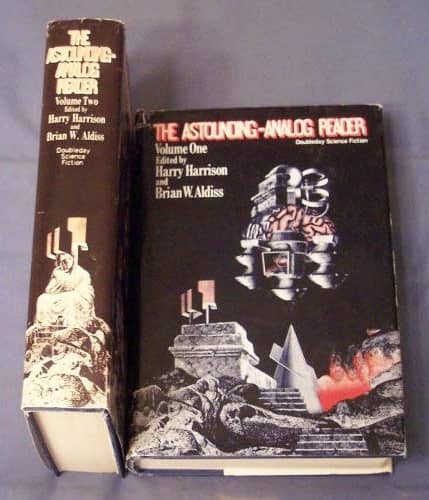 Although they were both sizeable books, Volume One and Volume Two both rather look like low-budget productions. They use the same exact same cover art and design, for example, which I’m sure wasn’t confusing at all. 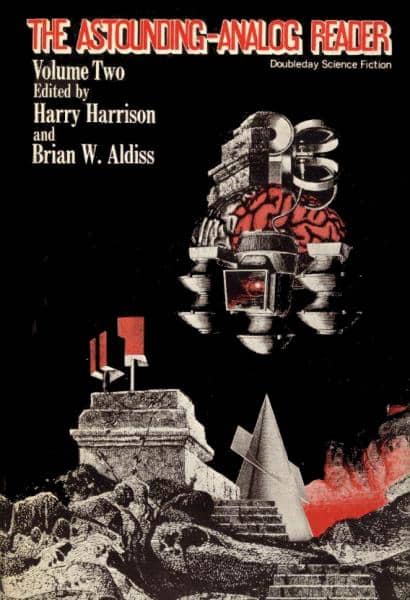 Here’s the Table of Contents for Volume Two. If you’re in the market for this one, pay close attention to the cover text so you don’t end up with two copies of Volume One or something. I’m just saying.

Here’s the back covers for the Sphere paperbacks.

Back covers for The Astounding-Analog Reader, Book One and Book Two

Here’s the complete publishing details for the Doubleday hardcovers.

And for the Sphere paperbacks, which reprinted Volume One in two books.

Volume Two has never been reprinted. All the books have been out of print since 1973, and there are no digital editions.

Aldiss and Harrison produced some excellent anthologies, separately and together. Some of the ones we’ve covered include:

Some really good stories there. I ought to find these.

Great tribute to a great anthology! I really enjoy the giant cover images you add to these Vintage Treasures posts.

Re the ridiculous cover situation for volume two: I could have sworn that the library copy of this that I read as a kid had a predominately white cover, to contrast with the black cover of volume 1. But when I set out to get a copy of volume two a couple of years ago, I couldn’t find any evidence of this. I have to assume someone has been meddling with the timeline. Either that or I’m misremembering. BUT THAT NEVER HAPPENS. As far as I can recall.

Because these books are pretty fair samples of the magazine through its Golden-through-Iron Ages, volume 1 is a better value than volume 2. Both are worth reading, though.

Knowing what I know now, I’d’ve preferred another Simak story to “City”, one of the weaker stories in that series. (No ants or mutants. No dogs. Not even a robot, unless you count the demented lawn-sprinkler.)

“Time Wants a Skeleton” (though corny in some ways) made me the confirmed fan of Ross Rocklynne that I remain to this day. He’s one of these guys who never made it big, but never stopped doing weird and interesting stuff, e.g. “The Men and the Mirror”, The Sun Destroyers , “Ching, Witch!”, etc. I’d love to see a “Best of RR” or even “The Complete SF of RR”.

I wish Kuttner and Moore had returned more often to the setting of “Clash by Night”. I liked Fury, the Kuttner novel set in the same world, but it seems like there could have been a lot more.

> Some really good stories there. I ought to find these.

eBay is the only place I could find them. I bought the paperback copies I scanned above for $6.84 (Book 1) and $7.19 (Book 2), with free shipping. Copies are definitely out there.

The hardcovers might be a bit trickier? Complicated by the fact that you’ll have to compete with me for a copy of Volume Two! 🙂

> I could have sworn that the library copy of this that I read as a kid had a
> predominately white cover, to contrast with the black cover of volume 1.

You sure you’re not thinking of Anthony Boucher’s A TREASURY OF GREAT SCIENCE FICTION, with its contrasting black and white volumes? 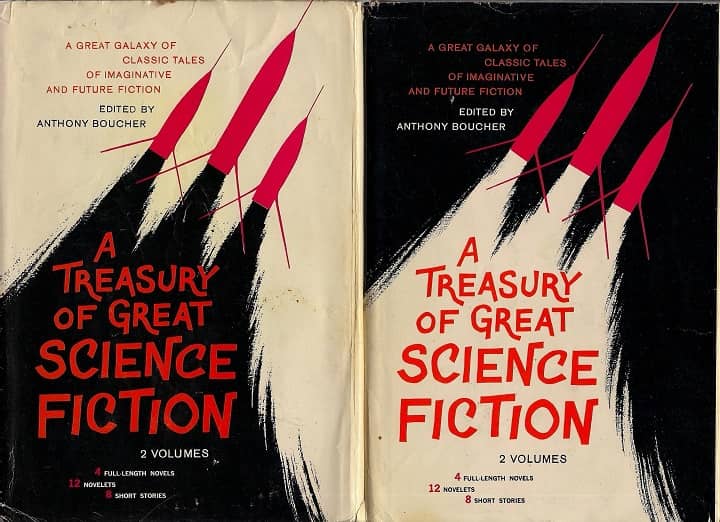 > “Time Wants a Skeleton” (though corny in some ways) made me the confirmed
> fan of Ross Rocklynne that I remain to this day. He’s one of these guys who
> never made it big, but never stopped doing weird and interesting stuff

I confess I can’t remember anything by Ross Rocklynne… so your endorsement makes me very curious! His “The Men and the Mirror” was included in BEFORE THE GOLDEN AGE, which reminds me I need to finish reading the last third of that book…

I picked up the hardcover editions of these about 18 years ago or so. I haven’t read them mainly because I have read most of the stories before. I need to dig them out.