I’ve been collecting Year’s Best Science Fiction volumes for years. Many fine editors have tried their hand at them, starting with The Best Science Fiction Stories: 1949 from Everett F. Bleiler and T. E. Dikty, and carried on for the next seven decades, almost without interruption, by Judith Merril, Donald Wollheim, Lester del Rey, Terry Carr, Arthur W. Saha, Gardner Dozois, David Hartwell, and all the way up to the current crop of annual Best of volumes from Neil Clarke, Rich Horton, Jonathan Strahan, John Joseph Adams, and Paula Guran.

I haven’t paid as much attention to the British editors however, and that’s an oversight. In particular, I only recently (like, six days ago) discovered that there were nine volumes in The Year’s Best SF series edited by Brian Aldiss and Harrison, which began in 1967. That’s because I rather foolishly based my count on the US reprint editions, published in paperback by Berkley Medallion with gorgeous covers by Paul Lehr.

But you know what? Turns out Berkley only reprinted the first seven volumes in the series. Who knew?? That meant there was a two-book hole in my proudly spotless Year’s Best collection that needed to be fixed, stat.

Fortunately. there’s really no such thing as an expensive science fiction paperback — not if you hunt long enough. Rare, sure. Overpriced, certainly. But I have tens of thousands of vintage SF paperbacks in my house, and I don’t think I’ve paid than ten bucks for more than a handful of them. And I sure didn’t in this case. 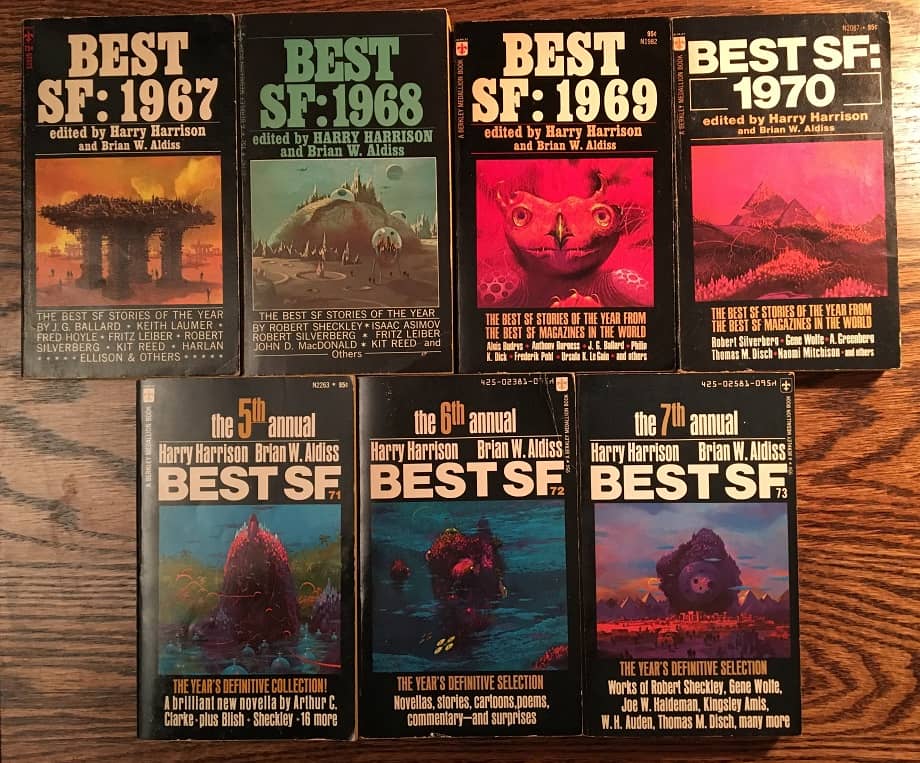 This sure looks like a complete set of Harry Harrison and Brian Aldiss Best SF volumes, doesn’t it? Sneaky bastards.

So I set out to track down the UK editions of The Year’s Best SF 8 (1975) and Year’s Best SF 9 (1976), and found a copy of the latter online for under $3 (see pic above). It’s the last one in the set and, like the previous volume, was never reprinted in paperback in the US.

Let’s back up a bit. The Aldiss/Harrison Year’s Best SF series began in 967, and was published in the UK by Sphere (and eventually Orbit/Futura), and in the US under the title Best SF: 1967 (then Best SF: 1969, 1970, etc.) by Berkley Medallion. A total of nine were produced but — ha! — for some goofy reason Berkley only reprinted the first seven. Go figure.

When I finally got a copy of volume 9 in my hot little hands I dipped into it immediately, and found that Harry Harrison’s introduction looked back at how the whole series started — by picking up the baton from Judith Merrill, whose The Year’s Best S-F series ran to a dozen volumes from 1956-1968. Here’s the relevant section.

So one day I suggested to Brian Aldiss that what this world really needed was a good annual anthology of the best SF of the year. Judy Merrill had done an admirable job with her best, but she was out of business and the libraries would be crying for their annual fix of a hardbound volume of this category prose. A fine idea, Brian said, and agreed that we were just the chaps to do it.

Here is the Ninth Annual and where *has* the time gone? It has been hard and interesting work putting together these volumes, and productive in unexpected ways. By reading everything written, every year, I have had a continuing perspective of the development of science fiction, something I would ever have had by remaining inside my ivory rocket ship and writing in solitude. It has been a very interesting decade to watch.

I would not say that SF was in disarray nine years ago. It was just not as booming, nor did it smell as good as it does now. The SF films were all about glop monsters pouncing on screaming girls. 2001 A Space Odyssey changed all that, and now Newsweek is proud to announce that, “The recent wave of disaster films will be succeeded by a spate of science fiction movies.” And they casually mention $20 million budgets. Well good – they are *are* good SF, but we have been fooled before.

If you read more than a few Year’s Best anthologies from the 60s and 70s, you’ll immediately notice how editors spent a lot of energy complaining about how science fiction didn’t get enough mainstream attention and respect. Like, a lot. All that changed after Star Wars, of course, and The Sword of Shannara (which kicked off the era of the modern SF bestseller), both of which were released in 1977. 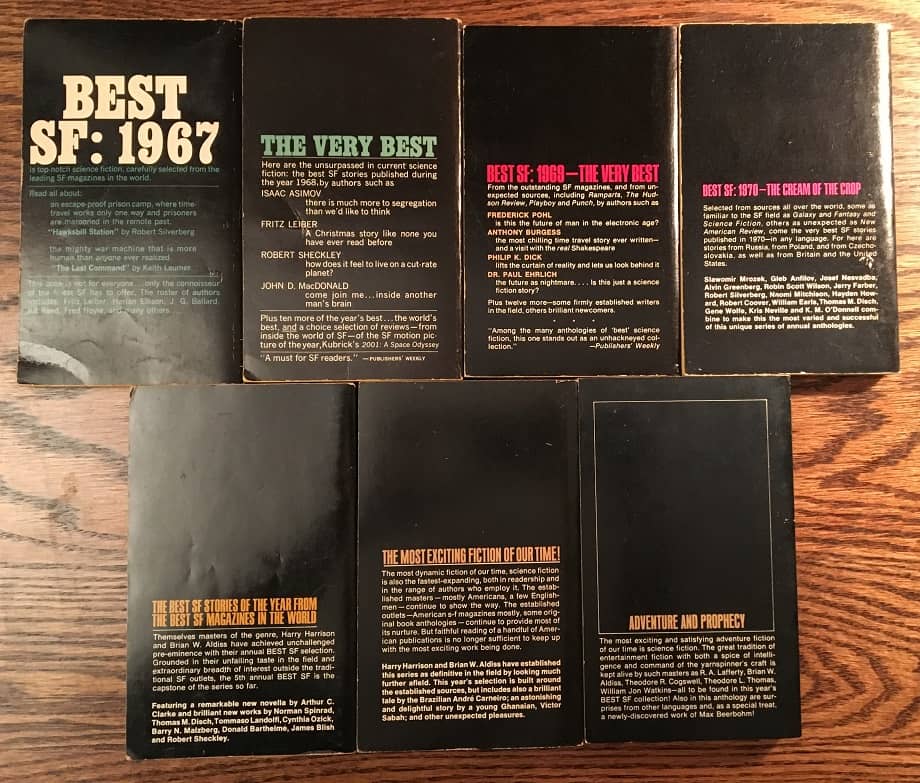 Here’s all that hyperbolic 70s back cover text for your enjoyment. You’re welcome. (Click for legible version)

Aldiss and Harrison had a proud history of excellent anthologies, edited together and separately. Some of the ones we’ve covered include:

Congrats on filling at least one of the 2 holes in your “Year’s Best” library!

And what ever happened to that Updike kid? Clearly, not important enough of a writer to feature his name on the back cover. No Joe Haldeman, he. Though I did notice that an English publication (no less) got M. John Harrison’s name wrong.

Do you have the Orbit Science Fiction Yearbook? Also a UK series. There were three volumes, published 1988 – 1990. They pick up right after the end of Terry Carr’s series, but unfortunately didn’t continue very long.

> Though I did notice that an English publication (no less) got M. John Harrison’s name wrong.

I didn’t even notice that until you pointed it out. It reminds me how much a a shoe-string operation many paperback publishers were in the 60s and 70s. No one was proofing the back cover copy.

This is one thing I noticed when I was publishing a print version of Black Gate years ago. The more staff you have involved, the more embarrassing mistakes you spot before going to press!

I was aware of the Orbit Science Fiction Yearbook…. but I had no idea there were three! In fact, the only one I have is #2. However, you’re quite right — they look excellent, with a stellar list of contributors. Do they read as well as they look?