We lost Gardner Dozois, one of the greatest editors the SF field has ever seen, in May of last year. As devastating as that was, many of us took some solace in the fact that he had a handful of very exciting books still in the pipeline, and we’d have the opportunity to celebrate and remember him a few times yet.

The first of those, the 35th and final volume in his legendary Year’s Best anthology series, was published last July, and the monumental The Book of Magic (companion to The Book of Swords) arrived in October. The third and final book from Gardner, The Very Best of the Best, was published by St. Martins’ in February. It’s a massive tome, with a Hwarhath novella by Eleanor Arnason, an India 2047 novella by Ian McDonald, a Mars novella from Kage Baker, a novella by Robert Reed, a Quiet War novelette by Paul J. McAuley, and stories by Yoon Ha Lee, Peter Watts, Nancy Kress, Rich Larson, Maureen F. McHugh, Charles Stross, Eleanor Arnason, Michael Swanwick, Carrie Vaughn, Lavie Tidhar, James S. A. Corey, Stephen Baxter, Alastair Reynolds, Greg Egan, and many others.

While the subtitle is 35 Years of The Year’s Best Science Fiction, implying that the stories are selected from all 35 years of Gardner’s Year’s Best, that’s not true. The earliest tale is from 2002, and the most recent from 2017, meaning it’s really a retrospective looking back at the fifteen years between 2002-2017. It’s a rather idiosyncratic book, neglecting many of the most acclaimed stories from those years in favor of the authors and tales that Gardner loved best. Nonetheless, it is one final gift from Gardner, and if this truly is his final book, it’s a magnificent capstone to his career.

I owe a pretty big debt to Gardner — and not just because (for reasons unknown to me) he included me in the acknowledgments of his Year’s Best anthologies for over a decade. He edited some of the best science fiction I’ve ever read, and discovered, promoted and championed many of my favorite writers — and helped me discover many, many more.

Here’s the complete Table of Contents for The Very Best of the Best.

Why does The Very Best of the Best cover only the last 15 years? Because in truth this volume is a companion book to the two previous compilations Gardner produced last decade, covering those early years.

The first gathered short stories, and the second novellas. Both are still in print and make fine reading.

Is The Very Best of the Best Gardner’s final book? I expect there will be additional collections of his own work assembled in future years by other editors, but this is almost certainly his final anthology. Gardner was working on at least one additional book before his death that will never see the light of day. Matthew Hughes posted this intriguing tidbit on Facebook yesterday:

Got up this morning and was surprised to find a Paypal payment from The Magazine of Fantasy & Science Fiction for “The Last Legend.” That was relatively quick.

The story was originally written for the anthology, The Book of Legends, that Gardner Dozois was assembling when he died. 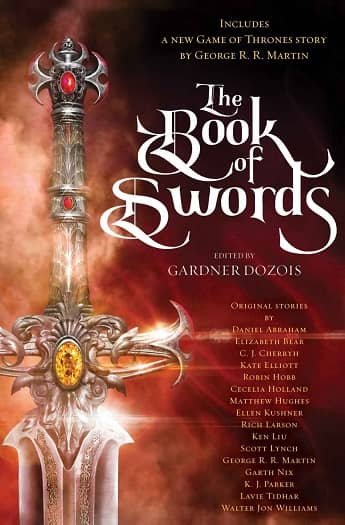 Our previous coverage of Gardner’s many books and articles includes:

The Book of Magic
Jack Dann & Gardner Dozois’ 40-Volume Reprint Library
The Book of Swords
A Book That Makes You Yearn to be Stranded on a Desert Island: Modern Classics of Fantasy
The End of an Era: The Year’s Best Science Fiction: Thirty-Fifth Annual Collection
Gardner Dozois on the New Sword & Sorcery
Worldmakers and Supermen
Explorers and The Furthest Horizon
The Good Stuff
Multiverse: Exploring the Worlds of Poul Anderson, edited by Greg Bear and Gardner Dozois
Gardner Dozois on the 2013 Hugo Nominations

Gardner also produced a number of massive best-selling anthologies co-edited with George R.R. Martin. They include:

The Very Best of the Best: 35 Years of The Year’s Best Science Fiction was published by St. Martin’s Griffin on February 26, 2019. It is 686 pages, priced at $39.99 in hardcover, $23.99 in trade paperback, and $11.99 for the digital edition. The cover, a montage of ten previous cover images in his Best of the Year volumes, was designed by Jim Burns.

See all our recent coverage of Gardner’s work here.

Amen. Blessings and peace. Gardner, you are fondly missed and eternally remembered.

Here’s a pic I found that I meant to include in the article. It shows all 35 volumes of Gardner’s Year’s Best, published from 1984-2018. It may be the single most comprehensive library of the best in modern science fiction. 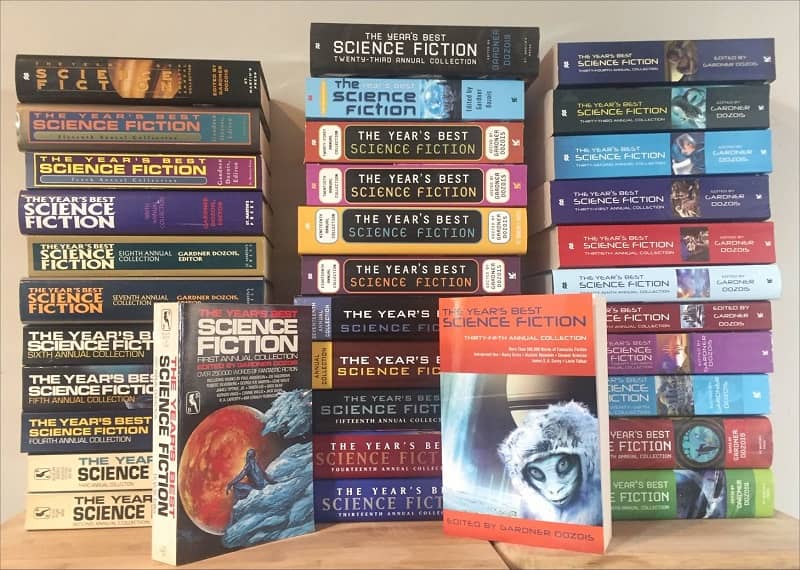 Except for the early volumes, all these books are easy to find. You can find the most recent half-dozen remaindered for under $10 each here:

If wishes were horses, I’d ride to the bookstore and buy this one, and the other two. Instead, I’ll have to be satisfied with the older ones I happen to have.

I’ve been contacted by one of the individuals invited to submit to The Book of Legends, and this person agreed to let me share the following:

“Since you’re interested: Gardner had sent out invitations for The Book of Legends and had received, I think, four stories when he died. That included mine, because I tended to drop everything and write when Gardner wanted something. So he’d bought (and paid for) mine, when he suddenly died of that damned infection.

His son, Chris Casper, looked at keeping the project alive, but from the few emails I saw, I gather that some of the invitees didn’t want to go on without Gardner at the helm. Things were up in the air for a while, then the project ran out of steam. Finally, we heard that Bantam had canceled it.”