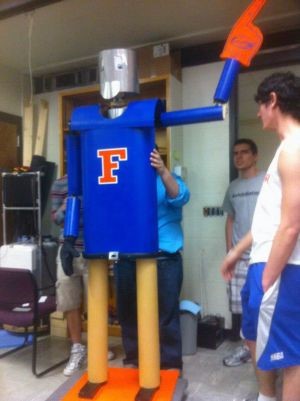 Don Wiggins was one of the charmed young men who became college legends back in the days when just being a college student came with a halo of prestige. A native of nearby Jacksonville, he entered the University of Florida in the late 1940s and in 1951 was named to UF’s Hall of Fame. He graduated in 1952 with an Electrical Engineering degree and was immediately hired as an Assistant in Research before rapidly rising to the professorial ranks. His nerdiness was not in question, but he probably never got teased by the jocks at the football-crazed school. At least not twice. He was also faculty instructor to the Judo Club.

All of that paled to his true claim to fame. He was “father” to Otto Mattix, the school’s robot mascot, here with minor personages like the college’s dean and president. 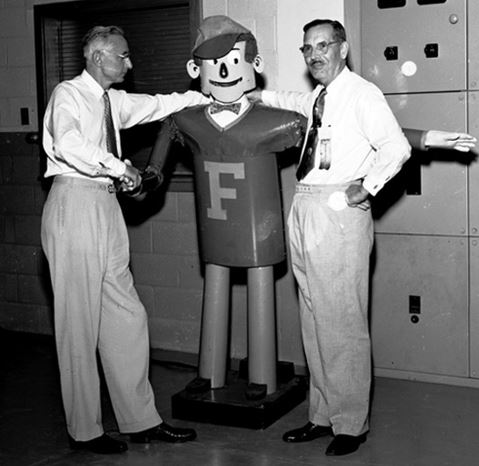 As is true for many legends, Otto’s origins have clouded with time. Several later articles state that he was introduced at the 1949 UF Engineering Fair. But a 1955 Tampa Tribune article “interviewed” Otto on what was supposedly his fourth birthday.

Otto was quite chatty with the reporter, voice supplied by Wiggins through a microphone connected to a speaker in Otto’s mouth, which moved via an electrical relay while he talked. Reading the result, one suspects that the reporter took a few liberties with the professor’s prose.

“The kids – oh, those kids. They pull on my hands, jump up and down on me – and even give me a good kick when their mother isn’t looking, just to see what I’ll do.”

Otto heaved a deep sigh which started way down in his left armature.

“Trouble is I can’t do a thing about it. I can’t move a muscle without Prof. Wiggins’ say-so. Talk about henpecked husbands.”

Wait. That makes Wiggins Otto’s wife as well as father. Someone might want to think about the scenario as the makings of a very adult science fiction story.

Wiggins built Otto out of surplus war parts, mostly from airplanes. “Wing-flap motors move his arms, and a pulley-and-magnet combination wiggles the ears and winks the eyes. The hair is steel wool, a little difficult to comb, but inexpensive – the kids pull out a crop every season.” 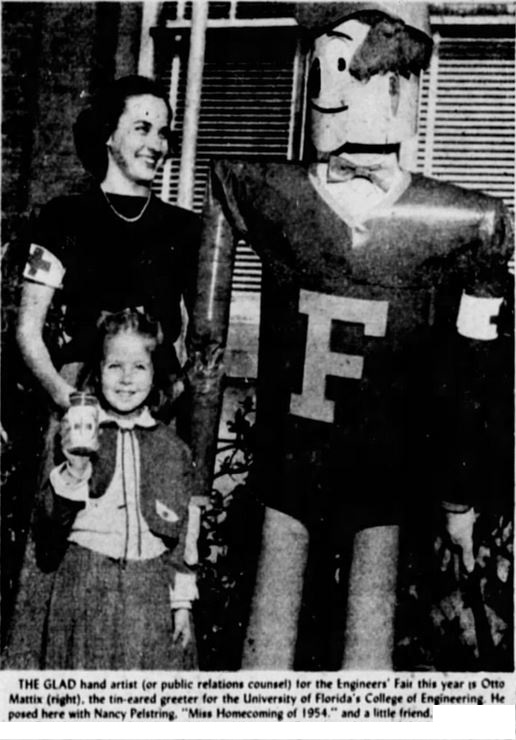 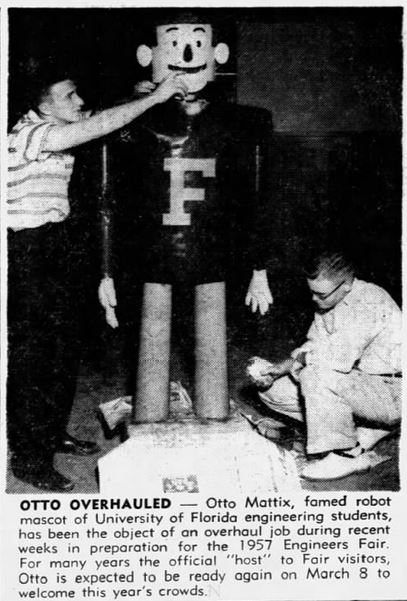 He went over big with children, of course. 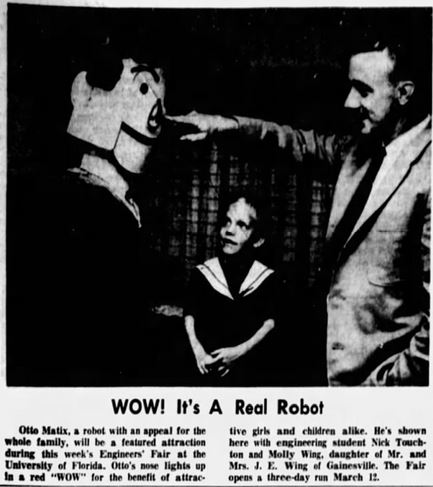 Otto also was a hit with the kiddies at the Florida State Fair. (The clothing the adults wear seems to come from an alternate timeline. Were those outfits ever fashionable?) 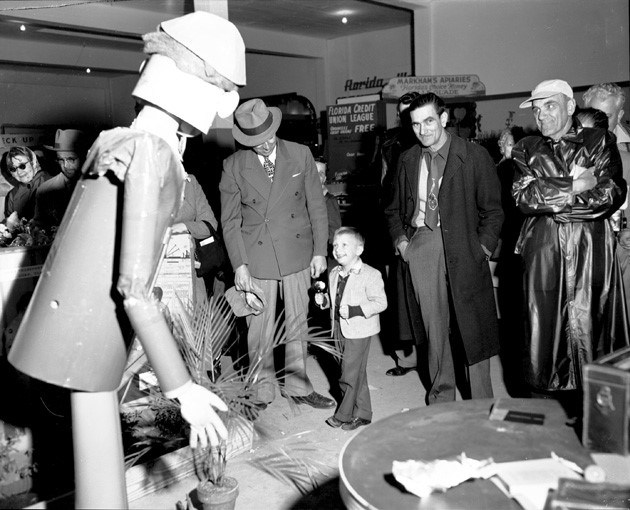 Blown fuses, condensors [sic] and minor parts have been replaced through the years, but Otto is on his last legs. “Complete surgery, replacing tubes, metal parts and bearings are his only hope.”

It didn’t happen. Otto kept being trotted out year after year, mostly to be paired with a pretty co-ed. Here’s one from 1967, posing Otto with the Engineers’ Fair Queen, Janis Lynn Biewend. 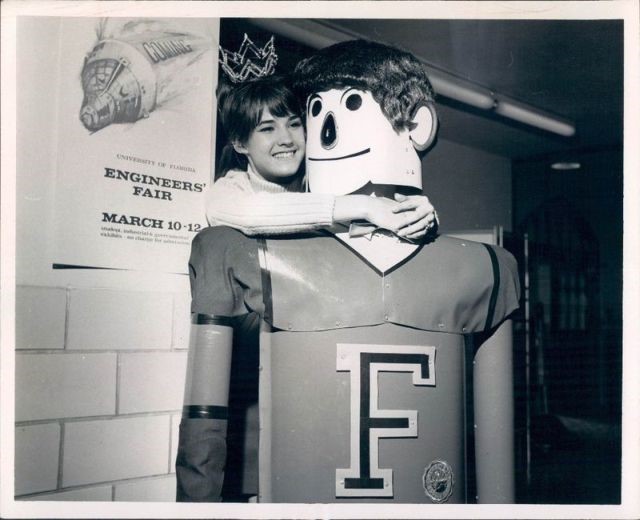 That went back half a century at the time. To show that robots weren’t menaces or scary huge machines (Otto was variously reported as six- or seven-feet tall), photographers were almost always careful to place them in the humanizing environment of children or small, petite women. Admittedly, newspapers always tried to include pretty girls in every possible picture in the old days. Their pages were full of cheesecake. Even by that standard, robots were seen far more often with attractive young women than with their inventors.

Newspapers just couldn’t help themselves. When the long-overdue Otto Mark II was finally rolled out in 1970, what did the headlines say? “Coed-Chasing Robot Created at U-F” and “Students’ Robot Eyes Miniskirts”. The new Otto didn’t actually ever chase a co-ed, of course, much less catch one. The headlines extrapolated from Otto’s best new feature, his wheels. 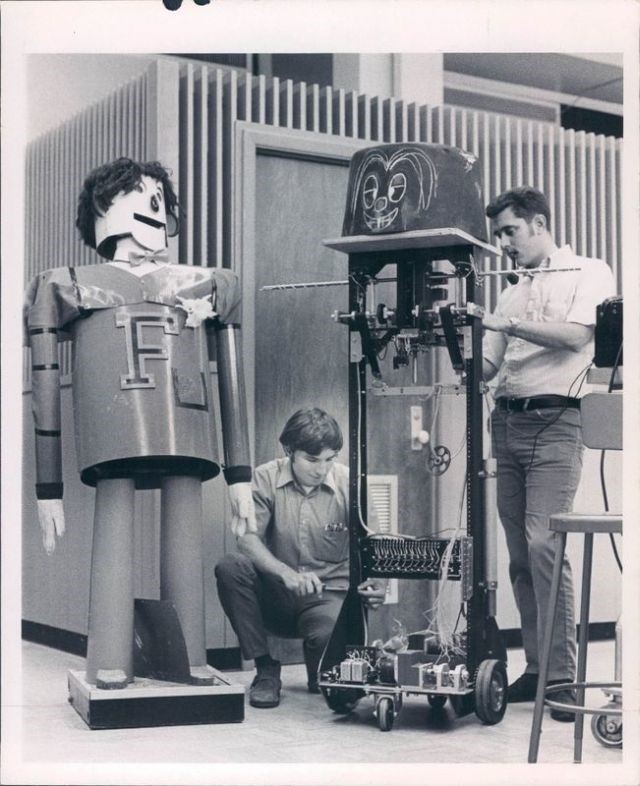 The new robot is free of power lines or communications and “does his thing” by radio control. Control is digital telemetry, something like a computer system. The installation is much like that used in space projects.

The new robot can move about, turn on a spot, raise and lower his arms, use his hands to grasp. The head rotates and the eyes move in the head. he can “hear” and “speak.” …

The new robot hasn’t been created in the image of man quite as much as Otto was. The thinking was that looking like a man wasn’t necessary and might even be a hazard. The head and body are functional and without projection except for the arms.

Where does the chick chasing come in? A careless humorous comment by one of Otto’s student creators. (Wiggins had left for private industry several years earlier.) Otto “had an eye and a whistle for the girls,” the reporter wrote. The student riposted: “He’s better off than Otto. This one can chase them around.” I’ve had experience with having one humorous line be the one line quoted from a long interview, and I know how silly it looked out of context. I feel for him.

Otto Mark II didn’t last long or, perhaps, failed to be the cute prop for women and children that the original Otto was. No newspaper stories followed up his 1970 introduction.

Then a resurrection. By the 21st century UF had a robotics club. The school’s Benton Engineering Council gave Gator Robotics a $700 grant to rebuild the 1957 version of the original Otto, making him once again the mascot for what was by then inflated to Engineering Week. Money didn’t go as far in 2011. Otto Mark III could move its eyes, mouth and arms, but it had no speaker. 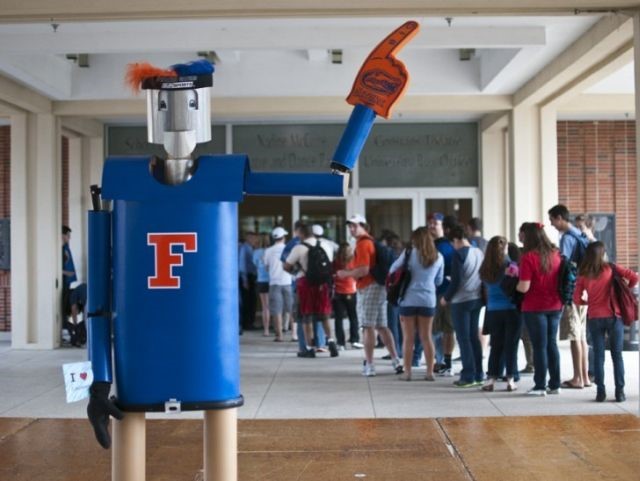 Nor was it as sturdy. Its new student builder admitted in 2013 that:

“His battery ran out and an accidental collision into a doorway knocked Otto out of commission,” Milns said. “Our goal this year is to fix him up and upgrade him better than before.”

Along with battery troubles, Otto’s arm was violently launched awry from the main body after performing his duties for the day.

Reports of Otto sightings again stop at that point. Otto is among the immortals, nevertheless. Generations of UF students to come can make a new Otto of their own, with the same beaming pride that Don Wiggins had back in 1949.

Steve Carper writes for The Digest Enthusiast; his story “Pity the Poor Dybbuk” appeared in Black Gate 2. His website is flyingcarsandfoodpills.com. His last article for us was A Whole World of Metal Men? His epic history of robots, Robots in American Popular Culture, is finally available wherever books can be ordered over the internet. Visit his companion site RobotsinAmericanPopularCulture.com for much more on robots.